Church members forced to pose like Christ on the cross during beating. 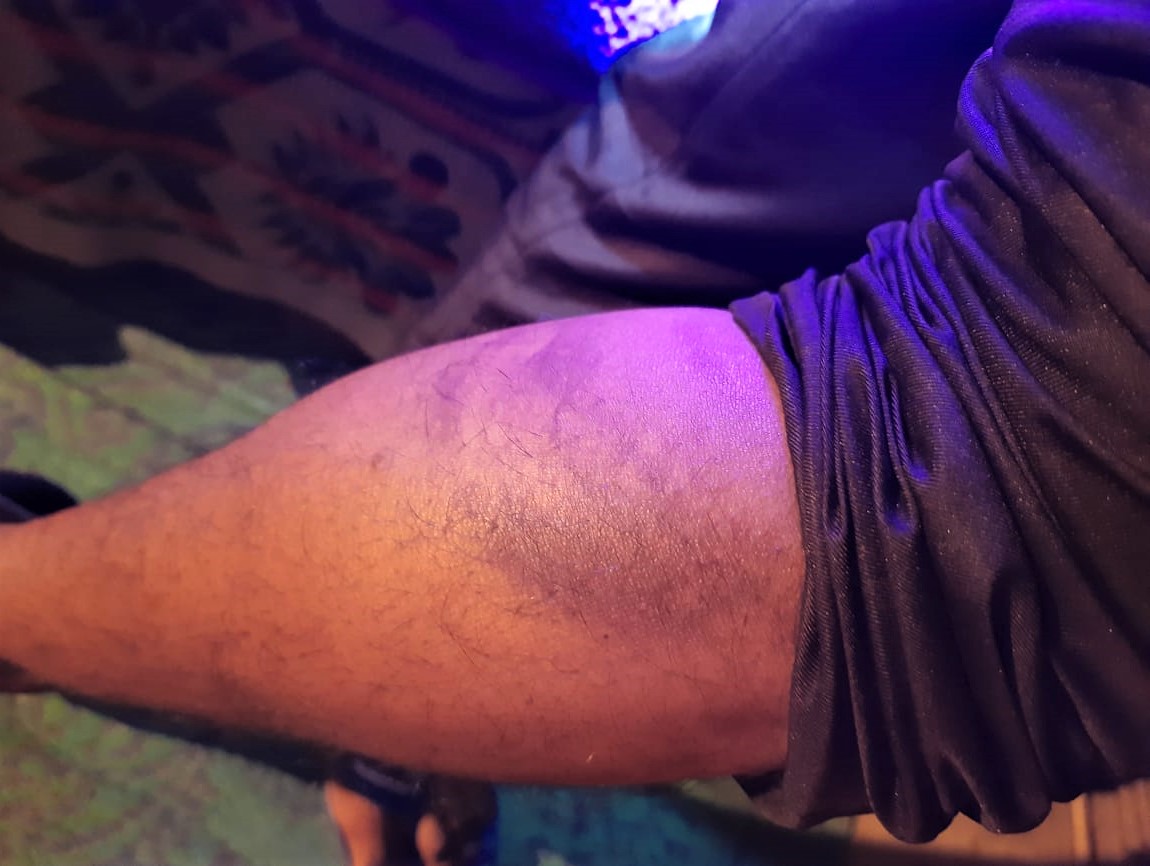 On March 15 a church of 200 people was immersed in a Sunday service when 30 Hindu extremists brandishing hockey sticks and steel rods arrived with police at the worship hall built on the premises of the pastor’s home in the Kunda area of Pratapgarh District, sources said.

“Once I saw them armed with hockey sticks and steel rods, I understood that they had come to attack us,” Pastor Indresh Kumar Gautam, 24, told Morning Star News. “I got down from the pulpit and decided to face them before they cause nuisance or attack any of the members of the congregation.”

He could see they were young men of the Hindu extremist Bajrang Dal from his and neighboring villages, he said. The pastor said they accused the church of increasing conversions to Christianity in the area.

“I told them clearly that we do not convert anyone, and that we had only accepted Christian faith and would be only praying for everyone,” he said. “If anybody chooses to follow Jesus after attending prayers, they are free to do so as the Indian constitution has granted the right to practice one’s faith freely.”

The intruders shouted at the worshippers to disperse immediately or they would be beaten brutally, he said.

“They had already started attacking us, and the police kept looking on,” Pastor Gautam said. “They seized the Bibles and the sound instruments, but the officers both male and female did not stop them.”

Instead, police forced five worshippers into police vehicles and took them to the Kunda police station, he said.

Along with the pastor, Vishesh Gautam, Mohit Gautam and Akash Gautam were arrested. Another person who had only recently begun attending services also was taken into custody, but when he told police he was not a Christian, they immediately made arrangements to release him on bail, Pastor Gautam said.

The four Christians remained in custody for six hours until the Sub-Divisional Magistrate agreed to release them on bail after forcing them to sign an affidavit stating that they would never again be involved in Christian conversion activities in the area, he said.

Torture in Police Station
A tall, well-built officer in plainclothes walked into the police station with a bodyguard at his side, the pastor said.

“All the policemen at the police station were saluting him; we did not know who he was,” Pastor Gautam said.

The officer entered their cell and began questioning them.

“When our turn came, he came closer and first enquired what our caste was,” Pastor Gautam said. “Then he asked, ‘Are you the religious conversions people?’ [‘Aap Dharm Parivartan waaley ho?’ loosely translated.] The stink of alcohol from his mouth was very strong and unbearable.”

Before they could reply, he began beating them with the cane, Pastor Gautam said.

Striking the pastor’s legs, the officer disparaged his caste and economic status in obscenities, the pastor said.

“I could hear him speak ill about me, my identity and faith, but I did not say a word,” Pastor Gautam said. “He had beaten me to a point I collapsed on the floor. I was lying there almost dead watching my friends also undergo the same degree of torture one after the other.”

The officer forced the other Christians to pose like Jesus on the cross, he said.

“He said that he wanted to get that feeling that he is torturing Jesus,” Pastor Gautam told Morning Star News. “‘Let’s see if your Jesus would come here to save you,’ he laughed, as he continued mocking us, calling us names, casteist slurs, but none of us protested.”

One of the Christians, Akash Gautam, is in severe pain and is unable to walk, Pastor Gautam said.

“He is unable to sleep because of the pain and bruises,” he said.

The torture continued for three hours, he said, adding that there were no CCTV cameras inside the cell to capture the violence.

“There is no evidence of it. Unless we show our scars, no one would believe us,” Pastor Gautam said. “There is severe pain in my wrist, so that I am unable to do any chores.”

One of the assailants who led the attack is close with the local politicians, he said. Not wanting any other church members to suffer as he did, the church has split into smaller groups meeting in various homes.

“I have received phone calls from pastors in the surrounding areas expressing their fears that they also might come under attack,” the pastor said. “I have assured them that I will pursue this legally to get justice, so that there will not be opposition to Christian worship in the area.”

Low-caste people who put their faith in Christ are often the targets of upper-caste Thakurs, Jaiswar said. Kunda is an area where local politicians from the Thakur community have police, administration and revenue under their control, he added.

“The Uttar Pradesh police force has time and again unleashed their anger against minorities,” Jaiswar said. “It appears the Hindu extremist groups are closely working with the police officers to target Christian worship.”

Superintendent of Police Pramod Pathak told Morning Star News that he was not aware of any attacks on Christian worship services, and that if any such activity comes to his notice, he would definitely look into the matter.

Illegal Arrests
Illegal arrests on baseless charges are among the police harassment that Christians have continued to bear this year in the notoriously anti-Christian, eastern region of Uttar Pradesh state, sources said.

Police on Feb. 23 accompanied a mob of Hindu extremists that attacked Shanti Dham village church in Lathudih, Ghazipur District. Pastor Shiv Shankar Ram was leading worship service at a home dedicated for Sunday worship when 20 extremists accompanied by police intruded and disrupted the service, he said.

“The police inspector had asked the congregation of over 100 Christians present at the home church to disperse, and if not there will be cases booked against them,” Pastor Ram told Morning Star News.

When he asked the inspector why he was threatening them, the officer only told him to shut up and forced him and pastor Shravan Kuman into a police vehicle, Pastor Ram said.

At the police station, the inspector locked them in a cell and disparaged them in foul language, he said. Church members reached the Karimuddinpur, Ghazipur Police Station and asked officers to conduct a fair and unbiased investigation, but police only took eight more Christians, including women, into custody, he said.

With 10 Christians behind bars, the police said that if anyone else came with pleas to release them, they too would be locked up, he said.

The pastor denied the inspector’s allegations of forcible conversion, he said.

The Station House Officer (SHO) later told him to go to his own village, and that if he came to the area again he would file such serious charges against him that “you will never be able to come out of jail,”’ Pastor Ram told Morning Star News.

After Hindu extremist leaders and the police began falsely accusing him of forced conversions, the inspector and other officers said they were getting calls in English from across India and foreign countries about him, he said.

Pastor Ram said some were saying, “He is the main culprit behind the conversion racket.”

Interrogation continued until late in the evening, and the Christians were booked under Section 151 of the Indian Penal Code for unlawful assembly, he said.

“The magistrate assured that the matter would be taken up the next morning (Feb. 24), but it came before him only on Feb. 27, and the rest of the seven Christians also were released on bail on the same day [Feb. 27],” Pastor David said.

A total of 15 cases of hostilities against Christians was registered in February, according to MapViolence.in, which is managed by the United Christian Forum.

“The sun would not go down without recording at least one case of attack on Christians from Uttar Pradesh on a typical Sunday,” Jaiswar said. “Neighbors in the area are influenced by the media coverage of hate-speech by local politicians, and such news spreads faster on social media applications like Whatsapp. The news articles spread false information that Christians forcefully convert Hindus by offering money or by intimidation.”

‘Conversion Racket’
Arrests on baseless charges in the state’s Azamgarh District led to media reports that jailed Christians were involved in a “conversion racket,” sources said.

After a church with Sunday attendance of 5,000 to 8,000 split into 300 house churches due to attacks by Hindu extremists and police, on Feb. 24 pastor Ajay Chauhan and Anita Gautam were leading a worship service at a home in Katauli village when Hindu nationalists stormed in and dragged the Christians out to the road, pastor Rajender Chauhan told Morning Star News.

“On that day, [Ajay] Chauhan and [Anita] Gautam were beaten by the Hindutva [Hindu nationalist] mob and were taken into police custody at Didarganj police station,” said Pastor Rajender Chauhan, who is Pastor Ajay Chauhan’s uncle.

They were in custody for more than 24 hours, said Christian rights activist Ravi Kant Dubey.

“It was published in all the local Hindu newspapers, mentioning the names of Hindutva youth leaders, that they had burst a conversion racket,” Dubey told Morning Star News. “My friend, activist Dinanath Chauhan, and I took up the matter before the Station House Officer at Didarganj police station, but he kept repeating the false narrative that Christians were involved in forced conversions.”

The Station House Officer (SHO) refused to free them despite not finding any evidence of forced conversions, he said, adding that the SHO confiscated his mobile phone when they continued advocating for their release.

“The SHO remained adamant until late in the evening, but we did not give up,” Dubey said. “We kept reminding him of the religious freedom and constitutional values and, by God’s grace, he finally released them at 9:30 p.m. without any charges.”

Pastor Rajender Chauhan leads a congregation of thousands of Christians in Jaunpur area and has come under attack several times. The Chief Justice of the Allahabad High Court in January 2019 held that the superintendent of police in Jaunpur should ensure that there be no interference in Christian worship, Dubey said.

“The order from the High Court upholds the Christians’ right to religious freedom, and we had hoped that the police officials would ensure that church attacks do not take place, but it continues even until today,” Dubey said. “We hear of an attack every next day.”