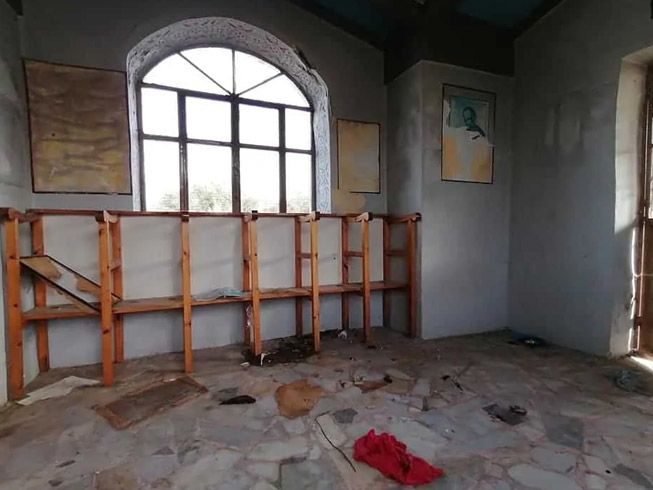 Wrecked interior of the small church near Moria, Lesbos, after it was vandalised

A church on the Greek island of Lesbos, attacked by vandals earlier this month, is now being used as a lavatory.

“The smell inside is unbearable,” an islander posted on Twitter. He said the church authorities in the island capital Mytilene were aware of the situation at St Catherine Church in the small town of Moria, where a huge refugee camp is based, but have done nothing about it.

St Catherine chapel, on the road to the camp, was vandalised in April, before Easter, for the second time in two years, despite its doors being locked. The attack prompted an islander to lament that Moria’s chapels were “being desecrated every day”.

Last month, the wooden entrance doors to St Raphael Church, close to the camp, were broken open and damage caused to the chapel interior.

In March, St George Church, another well-loved church close to Moria, was vandalised, causing much sadness in the area. The vandals wrecked historic Christian religious items and furniture in the interior of the building.

The Moria camp was built to house 3,000 refugees, mostly from Afghanistan and Syria, but now holds at least 20,000. The island, which has a population of 90,000 citizens, has experienced a rise in crime since the refugee crisis began in 2015, with clashes between police and refugees taking place almost daily.