Police Release Suspect in Attempted Killing of Pastor in India 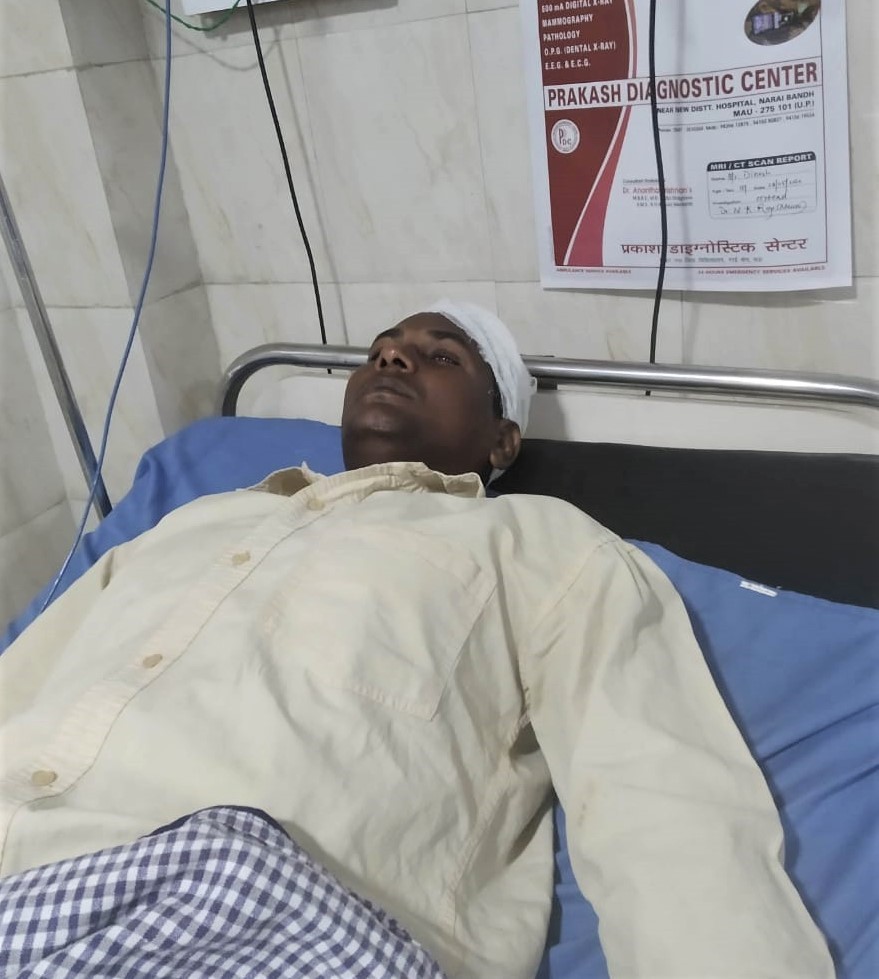 NEW DELHI (Morning Star News) – Under pressure from an official in the ruling Hindu nationalist political party, police in Uttar Pradesh state, India have released without charges a suspect in the attempted killing of a pastor last month, sources said.

“When we entered the police station for the identification process, the attacker was treated like a VIP, not as a criminal,” Deepak Kumar, brother-in-law of the pastor, told Morning Star News. “He was released the same day, even after we insisted that he is the one.”

Four men ambushed 39-year-old pastor Dinesh Kumar as he left Mohiuddinpur village, Mau District on his motorbike on May 28, beating him with clubs so severely that he lost consciousness. A deep wound to his head required 16 stitches, a cut on his arm seven stitches, and he sustained internal injuries; seeing the wound on his arm, a doctor asked his wife if he had been shot.

“They had no intentions to threaten me – they attacked to kill me,” Pastor Kumar, of Jamalpur village, told Morning Star News.

“I had often seen this man in the village when I visited the Christians,” he told Morning Star News. “That day too, he was sitting right opposite the house of the family who had invited me.”

Due to coronavirus social distancing measures, Pastor Kumar was standing outside the house of the family that had invited him, praying for a sick member and reading from the Bible, he said.

“I noticed him while I was sharing from the Word of God that he was observing me,” he said of the man opposite the house. “Later when he attacked me, I could clearly recognize him, but I did not know his name. I enquired of the villagers the name of the person, and only then could I report his name to the police.”

Police arrested the suspect and called Pastor Kumar to identify him two days after he was discharged from the hospital early this month. He and Deepak Kumar went to the police station, and Pastor Kumar identified the suspect, whose name is withheld for security reasons.

Pastor Kumar said he was expecting to hear soon from police of the arrest of the other three men and was stunned to learn otherwise.

“I was shocked to learn that the police did not charge him with any crime and just let him go,” he said.

Due to political pressure, he said, all four assailants are roaming free in the village. His brother-in-law said that police freed the suspect due to the intervention of a well-known political leader of the Hindu nationalist Bharatiya Janata Party (BJP).

The head of the Madhuban police station initially denied to Morning Star News that identification of the suspect took place, then later acknowledged it.

“The victim in his FIR [First Information Report] did not name anybody, and later when we went to the hospital and enquired from him, he still did not name anybody,” Station House Officer Sanjeev Kumar Dubey told Morning Star News. “It was only six days after the incident that he named this person.”

The original investigating officer has been transferred, and a new one was assigned to the case, Dubey said. The case is still under investigation and “no arrests have been made yet,” he said.

“An innocent man should not be punished,” Dubey told Morning Star News. “When Kumar did not name him twice, neither in the FIR nor in the hospital, and later he is naming him, it is doubtful.”

Dubey denied the accusation that police succumbed to Hindu nationalist political pressure by releasing the suspect.

“If he [released suspect] has done something, he will go to jail,” he told Morning Star News. “Even we try our best that the right person should be caught and right person be sent to jail.”

Christians thrown in jail while trying to report violence by Hindu extremists in India have come to fear police. When the officers visited Mohiuddinpur to investigate, Christian families became frightened, said Pastor Kumar, who suspects the assailants threatened them.

“The families got so scared when police reached their homes that they denied even knowing me,” said the father of three children, ages 3, 6 and 8.

Police have filed charges of “culpable homicide” and “voluntarily causing hurt” under sections 308 and 323 of Indian Penal Code against unidentified assailants.

Intently Watching Him
Formerly a Hindu who became a Christian in 2003, Pastor Kumar planted his first church in 2008 and began to visit Mohiuddinpur three years ago.

There are now seven Christian families in the village, but Pastor Kumar had not visited them or led worship services there since coronavirus shelter-in orders came into effect, he said. A church member there had called him three consecutive days requesting that he come to pray for her family, he said.

“I told the lady that I will pray for them over the phone, but she pleaded that I visit them personally,” he said.

Pastor Kumar reached the home in Mohiuddinpur, 22 miles from his home, at 3 p.m., after an hour-long ride, he said. He planned to stay the night at his in-law’s house, only three miles away.

“There were three families who shared their concerns with me, and I prayed for each of them one after the other,” he said, adding that he stood in front of their homes to offer prayers, rather than entering, due to the Covid-19 restrictions.

One of the assailants was intently watching him the entire time, Pastor Kumar said.

After praying for the family and sharing from Scripture, he left for the house of Deepak Kumar, his wife’s brother. He had gone about 500 meters when the four men emerged from the dark and attacked him with clubs, he said.

Pastor Kumar was hit on the head and he fell to the road, his wife said.

“Bleeding profusely from the head injury, his thigh, hip, back and hand took all the beatings,” Mumta Kumar told Morning Star News. “His thigh had turned completely blackish-blue, his hand sustained a deep cut, and doctors had to stitch the hand opening. He sustained several internal injuries and blood clots on his hip and back. His leg immediately began to swell after the attack.”

The assailants fled only after the headlight from a passing milkman’s motorbike hit them, Mumta Kumar said.

“The brutality with which they hit him, his hand, leg or even his head could have sustained fractures, but it is only God’s doing that his life is spared,” she said. “The doctor asked me if someone fired a bullet at him.”

Beside the road where they attacked the pastor is a deep trench, the pastor said.

“If they had a chance, they would have thrown me in the trench, and I would be gone forever,” he told Morning Star News.

The milkman alerted Mohiuddinpur villagers, and Christians there informed Pastor Kumar’s brother-in-law. Deepak Kumar rented a car and took him to Fatehpur Government Hospital; he was then referred to Sadar Government Hospital, which further referred him to the private hospital in Mau, given the extent of his injuries.

The doctors rushed him to the Intensive Care Unit, where he remained for six days.

A doctor told Mumta Kumar there were many blood clots in his head, she said.

‘Amazing Works’
Pastor Kumar said the attack has strengthened his faith in Christ.

“‘To live is Christ, and to die is gain,’” he said, quoting the Apostle Paul. “Even if people kill me for Christ’s sake, I will not stop doing God’s work. I have no fear, nor will I ever fear.”

In each village where the pastor has ministered, there are 25 to 50 people who eagerly testify of the work of Christ in their lives, he said.

“Jesus did such an amazing works, and people still did not recognize him; Jesus is using me and doing marvelous works through me,” he said. “There is a reason why Christ saved me. If He had no reason for my life, the way I was attacked I would have not survived. I should have died. My heart tells me that the Lord is still going to use me, and that is why He saved me.”