Another Christian Sentenced to Death in Pakistan on Weak Blasphemy Charges

LAHORE, Pakistan (Morning Star News) – A court in Lahore, Pakistan today (Sept. 8) sentenced a Christian to death over charges that he allegedly sent “blasphemous” text messages to a Muslim colleague seven years ago, his lawyer said. 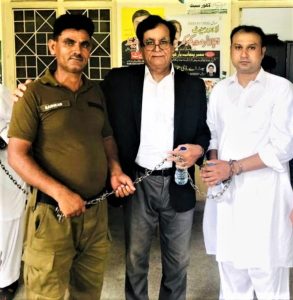 Asif Pervaiz, a 37-year-old father of four, has been in jail for seven years since he was charged with blasphemy in October 2013 after his former supervisor at a garment factory, Saeed Ahmed Khokhar, accused him of sending sacrilegious text messages from his cell phone, attorney Saiful Malook said.

Pervaiz was charged under sections 295-A, 295-B and 295-C of the blasphemy laws, he said, with the latter, insulting the prophet of Islam, Muhammad, carrying a mandatory death sentence. The court ruled that Pervaiz would first serve a three-year prison term for phone misuse, be fined 50,000 rupees (US$300) and be “hanged by his neck til his death.”

Pervaiz has maintained that his supervisor accused him only after he refused to convert to Islam. Malook said the prosecution’s case was so weak that he could not fathom why the judge had ruled against his client.

Malook, a Muslim who represented Aasiya Noreen (known as Asia Bibi), also sentenced to death before she won her freedom, said that the ruling by Additional Sessions Judge Mansoor Ahmed Qureshi dismayed him because there was no evidence to justify the charges.

Pervaiz has said he had lost his SIM card some days before the alleged incident, which Khokhar misused to send derogatory text messages to his own number, the attorney said.

“In his statement to the court, Pervaiz had categorically said that the complainant used to pressure him to renounce his Christian faith and convert to Islam,” Malook said. “Pervaiz said that due to the complainant’s constant harassment, he was forced to leave his job at the factory, but the latter continued to hound him at his new workplace.”

A First Information Report (FIR) was initially registered against “unknown person,” and Pervaiz’s name was added to it later using a different pen, which clearly points to mala fide, Malook said.

“Even though there’s a clear ruling by the Supreme Court that such doubtful FIRs should be quashed, the sessions judge, while admitting that my client’s name was added later, ruled that he did not see any dishonesty on the part of the complainant because he had approached the police specifically against the accused,” Malook said.

The forensic report on the text messages that the prosecution presented also should not have been admissible because the officer who took the cell phone to the laboratory did not appear as witness as per the law, he added. The Supreme Court has ruled that it is binding on the prosecution to prove that evidence sent for forensic examination remains in safe custody from its recovery until sent to a forensic laboratory, but in this case the investigating officer failed to name the person to whom he handed the cell phone, he said.

Moreover, the duty officer did not appear in court to testify who had taken the evidence to the laboratory, Malook added. The report only stated the name of a sub-inspector, Muhammad Arshad, but even he didn’t appear in court to record his statement, the attorney said.

“Despite these glaring lapses, the judge still admitted the report,” Malook said.

A police telephone operator at the Crime Record Office of the Inspector General of Police had requested records of Pervaiz’s calls from the mobile phone company and appeared in court as a witness. But according to Section 164 of the Pakistan Penal Code, Malook submitted to the judge, the witness should have been the person who generated the cellular data from the automated system, not the person who requested it, and therefore this too could not be admitted as credible evidence.

“However, my argument was not considered,” Malook said. “Although I’m greatly disappointed by the ruling in this case, one cannot ignore the fact that it has become a norm of trial court judges hearing blasphemy cases to convict the accused no matter how weak the prosecution’s case is.”

Malook said he would appeal the conviction in the Lahore High Court this week.

He said Pervaiz was naturally distressed when the judge announced the sentence.

“It’s tragic that Pervaiz has already spent seven years in prison during the trial, and God knows how many more years he will have to remain incarcerated till the high court takes up his appeal,” he told Morning Star News. “The worst thing in blasphemy cases is that the accused are left to rot in jail for years till their innocence is finally proved.”

Between 1987 and 2017, 1,534 individuals were accused of blasphemy. Of those accusations, 54 percent (829) were made against religious minorities. As Christians make up 1.6 percent of Pakistan’s population, the 15.5 percent of accusations (238) against Christians is highly disproportionate.

Including Pervaiz, 25 Christian are imprisoned on blasphemy charges in 22 cases in Pakistan.

The Supreme Court ruled in October 2018 that Noreen (Aasiya Bibi) had been falsely accused in her case, and that Pakistan law provided inadequate oversight for false accusations.

In the past month, many people with in Pakistan’s Shia Muslim minority also have been accused of blasphemy, especially in Punjab Province.

New Case
Police in Khyber Pakhtunkhwa Province recently registered a blasphemy case against a Christian for allegedly desecrating pages of the Koran.

“The residents complained that pages of the Koran were being thrown in the sewage drain by unknown persons, which was hurting their religious sentiments,” Khan told Morning Star News. “We began investigating the case and took several people into custody. During interrogation, a Christian resident identified as David Masih confessed to the crime.”

Khan claimed Masih “practiced black magic” and was misusing the Koran for that purpose and was sent to jail after being charged.

Morning Star News has made repeated attempts to contact his family but has yet to reach them.