After Retaking of Delga, Christians Terrorized in Other Towns in Egypt 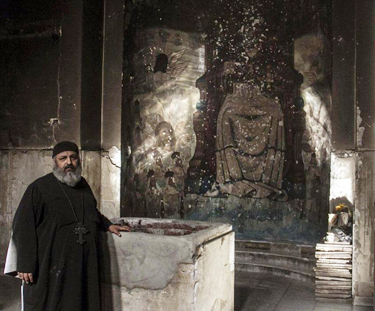 Islamists in the towns are again charging Jizya, a Koranic fine on non-Muslims also known as the “submission” or “humiliation” tax, after a lull following the retaking of Delga on Sept. 16, said human rights activists within the country. In several towns across Egypt, Muslim extremists and criminals have set up a cottage industry persecuting Christians for profit, the activists said.

Extortionists using the threat of kidnapping, torture and murder are seizing money, land and other property from Christians thoughout the southern part of the country but mainly in Minya and Assiut governorates.

“What you are dealing with now is some criminals attacking Christians – Christians who own shops and things like that,” said Mina Thabet, founding member of the Maspero Youth Union. He added that in the case of militant Islamists, persecuting Christians is seen “as a religious duty.”

Although exact numbers of the crimes are difficult to estimate, human rights activists say the attacks are both common and widespread, affecting Christians in dozens of towns. Almost every week, there are reports of Copts kidnapped and held for ransom.

“This past month alone, we had nine cases of kidnapping in Minya, and they all paid their ransom, which was between 100,000 and 250,000 Egyptian pounds [US$14,500 to $36,300] for each case,” said Ezat Ibrahim, director of the Minya branch of the Al-Kalema Human Rights Organization.

Most of the kidnapping victims have been tortured, Ibrahim said. Many were tortured so severely that when they returned to their families, they were completely broken, unable to talk about their ordeals, much less report the crimes to police.

One victim, a Copt who works as a human rights researcher, was kidnapped in an undisclosed town in Minya and severely tortured. The kidnappers tied him up, held an automatic rifle next to his ear and fired it repeatedly. Besides the emotional damage he suffered, the shockwaves exiting the rifle combined with the muzzle blast shattered the Christian’s eardrums and burned his face. The Copt begged his family to gather the ransom money, and eventually they paid the kidnappers some 50,000 Egyptian pounds (US$7,260). He returned to his family shattered and unable to speak of the ordeal until recently.

Most of attacks are happening in Minya Governorate, 152 miles (245 kilometers) south of Cairo, with another large share taking place in Assiut Governorate, 200 miles (320 kilometers) south of Cairo. In Manshat al-Mughlaqa, a village in Minya, a heavily-armed group led by a criminal who goes by the name of Saddam Hussein collects the Jizya by threatening to kill Christians or their children, according to Watani Weekly. Many Copts have paid the “tax” with amounts ranging from 25,000 to 250,000 Egyptian pounds (US$3,630 to US$36,300).

The ransom demands are enormous for the average Egyptian, with the amounts based on Muslims’ widespread perception that Copts are wealthy. And those who don’t have the means to pay have to beg for money from family and neighbors, meaning just one kidnapping can terrorize and financially drain an entire community. If victims of extortion attempts fail to submit and happen to own land, their fields and livestock are promptly set on fire.

Under attack for weeks, the Copts of Manshat al-Mughlaqa have asked police and military security several times for protection, but personnel have done nothing, according to Watani. Thabet said it is rare for police or military security to intervene to protect Copts because the forces lack either the will or the capability to take on criminal gangs.

Lack of initiative by police, perpetrators’ hatred for Christians and failure of the justice system to prosecute people attacking Christians all contribute to the extortion and allow it to continue, Thabet said. There is a perception that Christians can be attacked with impunity.

“If you hurt a Christian, no one is going to do anything to you,” Thabet said. “No one is ever brought to justice in any sectarian violence against Christians.”

The Egyptian Army on Sept. 16 moved into Delga ostensibly to break up a group of Islamists that had set up a state within a state who claimed they had done so under the authority of Islam. In two days, the army brought the town back under control with sporadic fighting and arrests that lasted until Sept. 20.

What seemed to be an attempt to save the Copts, Thabet said, was actually meant to crush Islamic opposition to the military government that took power following a wave of national protests that led to the removal of then-President Mohamed Morsi. Weeks after the army cleared the streets, Islamists and criminal elements returned to Delga and villages across Minya Governorate to make money by attacking Christians, although to a lesser degree and in ways that were less of a threat to the national government than before.

“It’s like groups of criminals were coming there for a job,” Mina said.

Part of the difficulty in breaking up the groups is the way they are structured and how they go about committing their crimes. The extortion gangs started operating when Morsi was still president. Before the military removed him from office on July 3, the gangs usually forced Copts off land by “squatting” on their property and harassing and threatening them until they abandoned the lands or even their businesses, Ibrahim of Al-Kalema said.

The Morsi regime did nothing to stop the seizures; in fact, most Coptic activists and journalists say that his rhetoric, which tended to be divisive, contributed to the atmosphere of impunity. But after Morsi was pushed out of power, the extortion gangs switched their approach to kidnapping and intimidation. Victims could be abducted in one village and held in another until the ransom was paid. Even if police did decide to get involved in stopping the extortion, they would be faced with a constantly moving target, Ibrahim said.

Thabet said that regardless of the cost, the Christian community, international interests and the Egyptian government all have to do something to stop the extortion and kidnappings.

“We have a long history of sectarian violence,” he said. “But we are in the 21st century now. There has to be a stop to this. We have to be more.”