Group says British volunteer their first ever to be arrested in country. By Our Middle East Correspondent 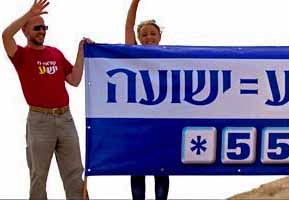 CAIRO, Egypt, November 26, 2013 (Morning Star News) – An Israeli immigration judge has ordered the deportation of a Messianic Jewish man from England who was arrested last week for taking part in an evangelistic event in southern Israel.

Barry Barnett, 50, a worker with Jews for Jesus UK, was ordered on Sunday (Nov. 24) to leave the country by Dec. 3. Barnett, who is based in England, was volunteering at the Jews for Jesus “Behold your God Israel” campaign around the city of Be’er Shiva when he was arrested Wednesday (Nov. 20) at about 4 p.m.

According to his wife, Alison Barnett, six immigration control officers took him from Be’er Shiva, 125 kilometers (78 miles) south of Jerusalem, to an immigration office in Omer, just outside of the city. He was held there for several hours without charge, then transferred to an immigration-holding unit of a prison in Ramle, near Tel Aviv. He spent four days in jail before his court hearing.

The team present at the time of the arrest was made up of Israeli citizens except for Barnett. Dan Sered, Israel director for Jews for Jesus, said in a press release that the arrest was “outrageous.”

“As an Israeli, I have been proud that our country allows for freedom of religion,” he said. “Yet those who seized Barry and took him to prison have done a shameful thing.”

According to Sered, the presiding judge ruled that Barnett was not allowed to engage in “missionary activity” while in Israel.

The reason the state of Israel gave for his deportation, he said, was that Barnett was engaging in missionary activity and not regular tourist activity on a B2 tourist visa.

“But the global ethics code for tourism, which the state of Israel signed and even advertises on its own Ministry of Tourism Web page, states that tourism for the purpose of exchanging religious beliefs is not only valid but also should be encouraged,” Sered said. “Therefore, his deportation and arrest by the state of Israel was done without a real legal cause.”

Sered said Jews for Jesus would fight the deportation order. If the order is not overturned, there is a risk that it will become a legal precedent that could be used to expel missionaries or any expatriate engaging in religious activities deemed unacceptable by the Israeli government – or by government officials acting alone.

The immigration officers who arrested Barnett seized a banner he was holding with a group of Israelis who were campaigning with him. Julia Pascoe, UK branch leader for Jews for Jesus, said there was nothing inherently offensive on the banner. The banner read, “Salvation equals Jesus,” which Pascoe said was an explanation of Jesus’ name and declared him the source of salvation. It also had a telephone number to contact Jews for Jesus.

Pascoe conceded, however, that, “The gospel is an offense to those who don’t want to hear it.”

Alison Barnett said that the ultra-Orthodox, anti-Christian group Yad L’Achim had followed the Jews for Jesus teams to their campaign sites in Israel since the event started. Yad L’Achim has a long-standing history of links with sympathetic government officials who issue legal actions on their behalf.

Jews for Jesus members fear there is a troubling possibility that immigration officials under the influence of Yad L’Achim may have an unwritten directive to arrest foreign religious workers as part of a general crackdown on missionaries.

Yad L’Achim has worked to deny Messianic Jews (who believe Jesus is the promised Messiah) the right of return to Israel and to deny spouses of Messianics immigration visas. They also picket and severely harass Messianics at their homes and their congregations and have been linked to different government agencies revoking the licensing of Messianic-owned businesses.

Informing on Barnett would fix a pattern of cooperation between Yad L’Achim and the government that has been well documented by the Israeli media. On Yad L’Achim’s website, the organization reported about interfering with the Jews for Jesus outreach’s “spiritually poisonous propaganda.”

“Yad L’Achim has been dispatching beefed-up teams of activists wherever the missionaries are taking up positions in order to alert the public as to their nefarious goals,” the ultra-Orthodox, nationalist organization stated.

Jews for Jesus is an international organization whose stated purpose is to, “Make the messiahship of Jesus an unavoidable issue to our Jewish people worldwide.” This is the first time a Jews for Jesus member, either a worker or a volunteer, has been arrested in Israel, Pascoe said.

“We have enjoyed freedom of religion in Israel over many campaigns similar to this one; the treatment we received was atypical of the way the law is usually enforced,” she said. “We have never experienced this before.”

Pascoe added that she doesn’t believe whoever directed the arrest is “a representative of the majority.”

Barnett’s wife, who wasn’t with her husband when he was arrested, said she was surprised about it as well.

“This is the first time we have had any problem like this at all, and we have done eight campaigns,” she said. “It was quite a shock.”

Nevertheless, Alison Barnett said she expects “opposition” when in Israel.

“And quite frankly,” she added, “if we don’t get any [opposition], we probably aren’t doing our jobs right.”