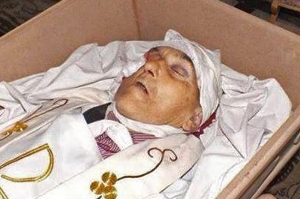 ISTANBUL, Turkey, April 8, 2014 (Morning Star News) – Christians across Syria are mourning the loss of a Dutch priest who, despite grave personal danger, refused to leave the civilian population stranded in Homs.

The Rev. Frans Van der Lugt, 75, a Jesuit priest, was killed Monday morning (April 7) in Homs, according to the Jesuit Curia of the Provinces of the Near East and the Maghreb. According to the Order, Van der Lugt, a Dutch national, was taken outside a monastery building by an armed man, beaten and then executed. The priest had lived in Syria for about 50 years.

Stephen Carter, advocacy officer for Syria for Middle East Concern, called the killing “senselessness.” Because of Van der Lugt’s lifelong commitment to the Syrian people and his refusal to leave Homs despite great personal danger, the priest was well known and loved, Carter said.

“A man of peace, Father Frans was unwavering and forthright in his commitment to and identification with the people of Syria,” Carter told Morning Star News. “His community mourns; warring factions blame each another for his murder. There seems to be no meaning – and in this, his death is no different than the thousands of others.”

Parts of Homs are held by either rebel-held forces or Islamic militant groups and have been under siege from government forces for about two years. Since the Syrian Civil War started in April 2011, Homs has been on the frontlines of the battle between  government and rebel forces.

Eventually, with the arrival of hard-core Islamic militants bent on establishing an Islamic state in Syria, parts of the country descended into a free-for-all, with ever-shifting alliances and leaders who seemed to fight against each other almost as much as they fought against the national army. Homs was also caught up in this struggle, with reports of anti-Christian atrocities in or around Homs, leaking to the outside.

Van der Lugt released several letters and videos to the public outlining the effects of the siege on the civilian population, both Christian and Muslim, of Homs. The siege and continued shelling in the city had forced out most of the civilian population, but according to Van Der Lugt, it practically wiped out the Christian community, reducing it from a population of 60,000 to just 66, he said in letters before he was killed.

“It is hard to discern optimism that Father Frans’ death might serve as a catalyst for renewed endeavor towards reconciliation and peace,” he said. “And yet that is the challenge that his murder presents – a challenge not just for combatants, envoys and interlocutors, but also for the interceding Church worldwide as we join with Syrian Christians in a day of prayer on the 11th of April.”

Selwanos Boutrous Alnemeh, the Syrian Orthodox Bishop of Homs and a friend of Van der Lugt, said the priest was killed by a “deceitful hand.” Writing on Facebook, he said Van der Lugt was a “new saint” in heaven and thanked God for the example the priest set while he was on earth.

“You were a model for us all. You were a support and a refuge,” Alnemeh wrote. “We love you, will remember you and will go forward with your memory.”