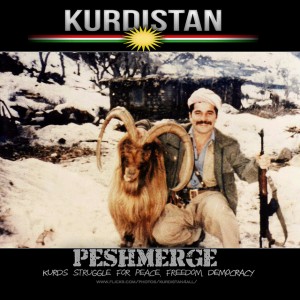 Iraq (ODM/MNN) — More Western nations are rallying together to support Kurdistan forces in the fight against Islamic State (IS) terrorists. Meanwhile, believers are coming alongside Iraqi refugees in the name of Christ.

Britain and six other countries have agreed to supply Kurdish militia with small arms and ammunition. On Tuesday, U.S. defense secretary Chuck Hagel praised the UK, France, Canada, Croatia, Denmark, Italy, and Albania for their commitment to equip the Kurdish “peshmerga.”

According to this BBC profile, peshmerga are the armed defendants of Kurdistan.

“The determination of the Iraqi people and the international community to counter the threat posed by [IS] is only growing,” Hagel stated.

The faces of tragedy

On the ground in Erbil, Open Doors USA is addressing the physical and spiritual needs of Iraqi refugees. The following is a first-hand account shared by “Lydia:” 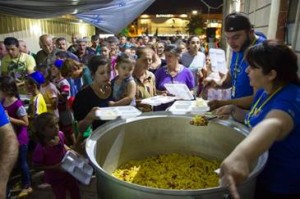 “In Ankawa, the Christian neighborhood in Erbil, many people have found refuge in a public park. Open areas are now packed with tents. Clothes are tightened between the trees so people can find shelter from the burning sun. Temperatures are over 100.

The park is across from Mart Shmoni, a Syriac Catholic church. On the street, next to the church gate, is a small room. A line of people is in front of it, waiting for their turn to visit the room, one by one.

Father Emmanuel Adel Kallo took us inside the room. He explains that most people couldn’t take any official papers with them, such as birth, baptism, and marriage certificates. If refugees want to leave the country, they need those papers as a proof they are Christian when seeking for asylum. In the room, church workers fill out these forms under supervision of a priest.

Seeing the number of people, it means that many Christians will leave the country or at least want to be prepared for it. And who will blame them? A man tells me he has no hope that he will be able to go back to Mosul again. He lived in a neighborhood where Muslims and Christian lived together in peace. They had meals together. They shared a cup of tea. They were friends.

However, when Islamic State (IS) came, even his Muslims friends turned against the Christians and wanted them to leave. They even helped IS drive them out. “It felt like a stab in the back. I was betrayed by close friends. This time I can’t go back,” he says.

Looking around, I see the same sorrow and disillusion in other faces. It breaks my heart, and I have to swallow hard to keep my emotions in the right balance. Some tears are fine, but I don’t want to burst out crying here. 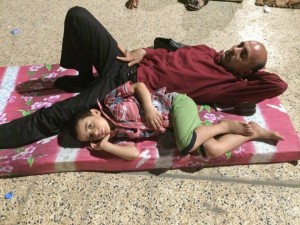 Father Emmanuel showed us the church yard and the public park. Lane after lane, tent after tent, every tree or place of shadow is occupied by elderly people, mothers, fathers, young adults, teenagers, and children. In total there are about 650 families, and every day there are new people arriving. The place is crowded. At night, even the walking areas are used by people to lay down a mattress. People sleep in the open air, accompanied by centipedes, cockroaches, and other nasty bugs.

Back on the street we visited a big tent: the medical clinic. There is hustle at the entrance of the tent. A man is aggressive. He is stressed and ready to fight his way into the clinic. Father Emmanuel takes control. He tries to calm the man down and keep him from fighting. The man has been given a place to sit, but he is still stressed and speaking with a loud voice. At last he is quiet.

People are worn out. It is hot and they are traumatized. Thank God there is comforting as well.

During the tour, Father Emmanuel is called on the phone many times. Everywhere he goes, people ask him to solve problems or just to have a chat. And every time he shows them kindness, attention, and compassion. This man must be under a lot of pressure, and still he is able to help and is kind to everyone. Not only Christians, but also to Muslims refugees, Yezidi, and other minorities. “Because,” he says, “Jesus loves everyone! He will provide.”

A senior man tapped me on my shoulder. While indicating his thirst, he points to the little bottle I have. It moves me because I realize that in a normal situation he would never have asked such a thing from a foreign woman. I give it to him immediately.

I pray that God will mend the broken and He will quench all of peoples’ thirst, whether it be physical or spiritual.”