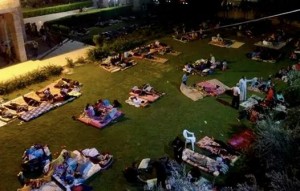 Middle East (MNN) — More threats are coming out of radical Islam. Yesterday, chatter was intercepted in the U.S. that terrorists had identified targets for an attack on U.S. soil.

Middle East expert with E3 Partners, Tom Doyle, says we need to be careful what we believe. “Lots of it is false. Lots of it is to tie up the government. Lots of it is to produce fear in the hearts of people. Look at the obsessive news coverage that we’re seeing. These guys are pretty savvy with media.”

Doyle points to the James Foley murder as an example of that. “Everything was rehearsed and scripted. To be able to be put out and tied to Guantanamo Bay, the way he was dressed and with an English-speaking Muslim. All of that is done to just show fear.”

It reminds him of the Assyrian Empire, who did the same thing. Entire villages would kill themselves knowing the Assyrians were coming.

Doyle points to another example. “This week there was an e-mail going around saying the Christians were being lined up and being beheaded. That didn’t happen. Someone put that out. We need to be careful. Christians shouldn’t live in a state of fear, but we need to be prepared.”

Doyle says if the media would ignore the threats, much of it would go away. “I’m thankful for Mission Network News. You cover the real story, what’s happening with believers, and the progress of the Gospel in the midst of all the destruction.”

Despite the seemingly hopeless situation, Iraqi Christians aren’t hopeless. They’re training nationals to share Christ and plant churches. “They’re training people to share the Gospel. They’re training them to plant small, little house churches. Whether they return to Mosul or where ever they go, they don’t want the Gospel to just stay with them. Obviously the need is to let it spread and let the light shine.”

While it appears dismal, Doyle doesn’t think so. “I believe this is one of the church’s finest hours with believers arming themselves with the Word of God, continuing the mission, knowing that if ISIS isn’t stopped, they’ll be killed.”