At least 147 dead, 79 wounded. By Our East Africa Correspondent 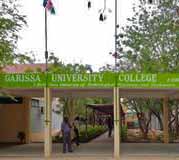 An area church leader who visited some of the more than 79 wounded people in a hospital told Morning Star News that patients said members of the Islamic extremist rebel group went through the dormitories asking if students were Christians or Muslims.

One of the victims at Garissa General Hospital, a member of the pastor’s church, said, “They started questioning the students whether they were Christians or not before shooting.”

The Christian student, whose name like the pastor’s is withheld for security reasons, said he and his dorm mates became terrified when they heard the assailants shouting, “We are Al Shabaab.”

“I even heard some of my fellow students reciting verses from the Quran as the attackers moved close by then,” he said. “That is when I was shot on my left hand, but I managed to escape to a nearby military base, then was taken to the hospital.”

The pastor said one of the wounded Christians said the attackers cut off the head of one of his colleagues.

“I just heard  several gunshots as I woke up in the morning, and this continued for several hours within the university compound, which is close to my church,” the pastor said. “What shocked me was that there was no noise of shouts or screaming coming from the university.”

“I only heard gunshots with no screaming,” the student told the pastor.

The church leader said that after talking with the wounded patients at the hospital, he was convinced that Christians were targeted.

“It was a selective kind of attack, as many Muslims went unhurt,” he said.

The Associated Press reported that a student who escaped, Collins Wetangula, locked himself and three roommates in their dormitory room. He said that he heard the gunmen opening doors, asking if those inside were Muslims or Christians and shooting the Christians.

Al Shabaab, which is allied with Al Qaeda, claimed responsibility for attack in the town of Garissa. Al Shabaab spokesman Sheik Abdiasis Abu Musab told Reuters that many Christians were being held by the militants, saying, “We sorted people out and released the Muslims.”

Officials said 500 students had been rescued at the 815-student campus.

Garissa is about 90 miles from the border with Somalia.

CNN quoted campus witness Joel Ayora as saying the Islamic extremists stormed into a Christian worship service. They took hostages and then went to the dormitories, shooting “anybody they came across except their fellows, the Muslims,” he told CNN.

Al Shabaab militiamen or their Somali sympathizers have carried out several attacks on Kenyan soil the past two years, usually separating out Christians and executing them, in retaliation for Kenya’s military involvement in the Somali government’s fight against the insurgents.

Al Shabaab took responsibility for killing four Christians on March 17 in Wajir, and another on March 15 in Mandera, in northeastern Kenya.

Thursday's attack appears to have caused greater loss of life than Al Shabaab's assault on the Westgate Shoppiing Mall on Sept. 21, 2013, which killed at least 67 people with dozens still unaccounted for. The assailants killed those they could identify as non-Muslims.

In 2011 Kenya joined African Union forces battling the Al Shabaab insurgents after a series of Somali attacks on tourists and other targets in northern Kenya, and since then Al Shabaab has carried out several retaliatory attacks on Kenyan soil.

The population of Kenya is 83 percent Christian, though only 7 percent are active in churches, according to Operation World. Only about 8 percent of Kenya’s population is Muslim.