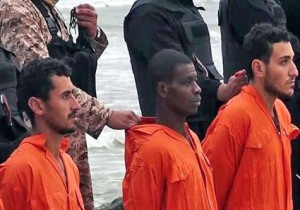 Libya (VOM) — [Editor’s Note: This Voice of the Martyrs story sheds light on one of the 21 Coptic Christians executed by ISIS in February, who was unknown for a time period.]

Following the martyrdom of Coptic Christian men by Libyan Islamic State (IS) militants in February 2015, the names of 21 of the martyrs were widely shared. The martyrs were kidnapped from Sirte, Libya, where they were working.

Initially, it was believed that all of the men killed for their faith were from small villages in Egypt. However, the name and background of one of those killed, a black man, was unknown. Mathew Ayairga was soon identified by friends after being recognized in video footage of the killings released by IS. According to Ahram-Canadian News, Mathew was from Chad. Mathew had gone missing in January 2015, captured by one of the radical groups in Libya who have kidnapped hundreds, both Muslim and Christian.

The video made public on Feb. 15 shows each of the men dressed in orange jumpsuits, kneeling on a beach, with their black-clothed attackers standing behind them. Each one is systematically beheaded, and the video clearly shows many of the men praying “Lord Jesus Christ” in their final moments.

According to reports, Mathew Ayairga was not a Christian. However, when moments before his death the IS extremists demanded that he follow Islam, Mathew turned them down. After reportedly witnessing the “immense faith” of the Egyptian believers, he decided to become a follower of Christ.

On camera, one of the terrorists asked Matthew, “Do you reject Christ?”

“Their God is my God,” he responded, and he became one of the 21 men laying down their lives for their faith in Christ.

The Names of the 21 Martyrs: