Published by Julie Oosterhouse on April 22, 2015

India (VOM/MNN) — [EDITOR’S NOTE: Christians in India don’t have it easy– some places are more dangerous than others. Yet, the same Christians who face danger each day understand the message they carry about Jesus is worth more than their safety. Voice of the Martyrs recently shared the following two stories of persecution brought on by Hindu Radicals and Muslims respectively. Pray that Christians in India would remain strong in their faith and their efforts to tell others about Jesus.]

Though a small house church in India had previously received warnings from Hindu extremists, a recent attack on two church leaders was surprising.

As the church met on Sunday March 15, radicals from the RSS and BJP Hindu political organizations stormed the service. Pastor “Arul” was in the middle of a sermon when more than 30 extremists poured into the building. They began to beat him in the face, head, and chest. “Omkar,” another church leader, tried to stop the attack, but he was overpowered. 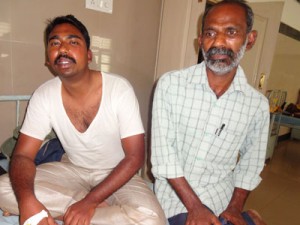 Pastors Arul and Omkar
had to be hospitalized for their injuries.
(Photo and caption by VOM)

The extremists wrenched Arul and Omkar out of the building. The angry mob punched and kicked the two as they dragged them a quarter of a mile to the police station. There, police charged the men with “forcing conversions,” a crime in many Indian states.

The attack left Arul and Omkar bloodied and badly bruised, and Arul had difficulty breathing. He and Omkar went to a nearby hospital. A chest x-ray revealed that two of the pastor’s ribs were fractured.

Omkar, an evangelist, met Arul when he came to the village to share the gospel. The two began working to establish a house church in the area. Approximately 20 believers now meet every Sunday in a rented building for prayer and worship. A month after the church began meeting, RSS and BJP members threatened the Christians. They also pressured the building’s owner to evict the church. In spite of the threats, Arul and Omkar have continued to lead the church each week.

Although India’s constitution allows religious freedom, attacks on Christians have risen in the last year. Hindu nationalist groups such as the BJP and RSS feel greater freedom to act now that BJP leader Narendra Modi is prime minister of India. The BJP and other Hindu nationalists subscribe to the idea that all Indians should be Hindu. Other religious groups threaten this belief.

After they were released from the hospital, VOM contacts met with the men and prayed with them for their recovery. VOM will continue to support them as they return to their ministry.

While at home in early February, “Vijay” received a call from the police.

After six Muslim men recently beat him and a friend after a follow-up meeting with a new Christian, angry men from the local mosque formally brought a complaint to the police against him for entering their community and sharing his faith.

The police called him to the station several times, including the morning a VOM partner was meeting with him.

“Vijay had to pay a 20,000 rupee fine to the police in front of his accusers who would not guarantee his safety unless he did so,” the VOM partner said.

VOM helped Vijay move to a nearby neighborhood and covered the costs of his fines, his first month’s rent, and moving expenses.

“Vijay has successfully moved out of his old neighborhood that was causing him trouble and into a new apartment about a mile away,” the VOM partner said. “There are more Christians in the new area, though there are Muslims and Hindus there as well. No news from those who brought up the case against him, so that’s a relief.”

A VOM partner has been meeting with Vijay regularly and reviewing pertinent Bible verses, such as Colossians 1:24-29 and Acts 4. Vijay feels the seriousness of the events, but remains positive. He recently received training from VOM, and his family is remaining positive, too, as it willingly accepts that it may face further persecution.

“Several of us went to his new place last week as a house-warming gathering and prayed with him,” the VOM partner said. “He and his family seem to be getting back to normal. Vijay accompanied me and two other men on Tuesday of this week to conduct training five hours away. He taught for about a third of the four hour training. This week he’s taking a Nepali believer to the north part of the city to model for him how he does evangelism among Muslims.”