Intelligence reports indicate conspiracy to kill her in prison. 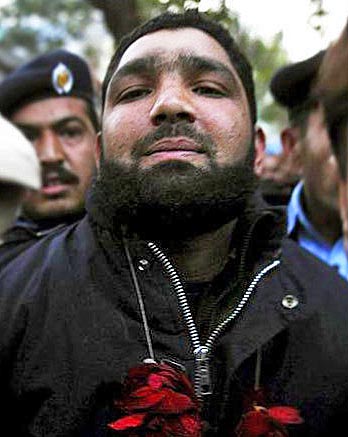 LAHORE, Pakistan, March 8, 2016 (Morning Star News) – Fears are growing over the security of the first Christian woman in Pakistan sentenced to death for “blasphemy” following the execution of Mumtaz Qadri, who assassinated her biggest advocate.

Qadri was executed by hanging on Feb. 29 for the Jan. 4, 2011 assassination of Punjab Gov. Salmaan Taseer, who had criticized Pakistan’s blasphemy laws and advocated for the release of Aasiya Noreen, widely known as Asia Bibi. She has been on death row since she was convicted in 2010 of blaspheming during an argument with a Muslim woman over a bowl of water.

‎A senior Punjab government official confided to Morning Star News that Noreen’s security had been beefed up following intelligence reports that Islamist groups are conspiring to get her killed inside prison to avenge the hanging of Qadri. Taseer had called the country’s controversial blasphemy statute “a black law” and demanded freedom for the Christian mother of two children and stepmother to three others.

Speaking on condition of anonymity because he wasn’t authorized to speak to media, the senior government source said that there was already a bounty on Noreen’s head of approximately 50 million rupees (US$$471,000), and that now that Islamist groups were calling for her swift execution, the government was exercising extreme caution to protect her.

“The government is doing its best to keep Noreen safe,” the official said. “Only her husband is allowed to meet her in jail, and she has been told to cook her own food to prevent any attempt at poisoning her meals. All guards deployed for her security have been carefully vetted by intelligence agencies and other security outfits to ensure that they are not extremists in their belief.”

He added that the government would not succumb to Islamists’ pressure at any cost.

“Mumtaz Qadri’s hanging is a message to all those who take the law into their own hands in the name of religion,” the official said.

Islamic extremists feted Qadri, showered with rose petals at his trial, as a hero and martyr, and his funeral last week brought up to 150,000 people into the streets of Rawalpindi, many chanting for Noreen to be hanged.

On Thursday (March 3), the chief cleric of Islamabad’s ultra-extremist Lal Masjid, Maulana Abdul Aziz, called on the government to execute “the blasphemer Asia Bibi as soon as possible and not bow to international pressure.”

Islamist pressure is growing every day, said a Christian activist who requested anonymity.

“The other day gold traders in Lahore announced that they would weigh Qadri’s father in gold on March 27, the day the assassin’s 40-day mourning completes, to acknowledge his service to Islam and its prophet,” the activist said. “I believe that the underlying message for Islamist youth is that their families will be taken care of properly if they kill any alleged blasphemer, particularly Noreen.”

Much prayer is needed for Noreen and other victims of the blasphemy law, he said.

“You never know, but the increasing pressure on the government could also have an effect on the hearing of her appeal in the Supreme Court,” he added.

Noreen’s lawyer, Saiful Malook, said she is being held in isolation and under strict security.

“But calls for her speedy execution have increased the risk to her life manifold,” he said.
‎
Pakistan has yet to execute anyone convicted of blasphemy, but anyone charged or accused of insulting Islam risks a violent death at the hands of vigilantes. A Christian laborer and his wife were thrown into the furnace of a brick kiln in 2014 after being wrongly accused of throwing pages of the Quran into the garbage.

Critics, including European governments, assert the blasphemy laws are misused, with hundreds languishing in jails under false charges that could see them face fines, life imprisonment or death by hanging.

Concerns for Noreen’s safety come as a Pakistani Taliban suicide bomber on Monday (March 7) detonated explosives in a courthouse in Charsadda, in Khyber Pakhtunkhwa Province, killing at least 17 people, including policemen and a woman. The Tehreek-e Taliban Pakistan claimed responsibility, saying in a statement that the attack was carried out to “avenge” the execution of Qadri.

Most of those killed were from the Barelvi movement within Islam, a relatively moderate group said to oppose violence, though Qadri’s execution had also upset Barelvis. No Christians were reported to have died in the attack.

Surge in Blasphemy Cases
An alliance of hundreds of lawyers is behind a rise in prosecutions of blasphemy cases in Punjab, according to a recent report.

The alliance, Tehreek-e-Khatam-e-Nabuvat (Movement for the Finality of the Prophethood), offers free legal advice to complainants and has packed courtrooms with representatives, a tactic critics say is designed to help it gain convictions.

The stated mission of the Khatm-e-Nubuwwat lawyers’ forum and its leader, Ghulam Mustafa Chaudhry, is uncompromising: to use its expertise and influence to ensure that anyone insulting Islam or its prophet, Muhammad, is charged, tried and executed.

‎Since Khatam-e-Nubuwwat was founded 15 years ago, the number of criminal blasphemy cases filed in Punjab, the group’s home base and Pakistan’s most populous province, tripled to 336 by 2014, according to police figures. It fell to 210 in 2015 as stricter provincial rules were applied, but critics said the number was still too high.

The same group prosecuted Noreen and later defended Qadri during his trial. The Islamist lawyers are now rallying religious groups to call for Noreen’s execution.

Napolean Qayyum, a Christian rights activist, told Morning Star News that he wouldn’t be surprised if the forum’s lawyers storm the Supreme Court during the hearing of Noreen’s appeal against her death sentence.

“Fear and intimidation is the extremists’ greatest weapon, and they might use such tactics to intimidate the judges and pressure them into upholding Noreen’s execution,” he said, adding that fears for Noreen’s security inside the prison were well founded as thousands of Qadri’s supporters are baying for her blood to “avenge” their hero’s death.

“We just hope that the government and the court do not cower under Islamists’ pressure,” he said. “Noreen has been suffering in jail for nearly six years; it’s about time that she is judged fairly by the court. We urge the government to take notice of the provocative announcements being made by religious groups. Inciting people to resort to violence is a criminal offense, and the government must not spare religious leaders who are encouraging Muslim youths to follow in Qadri’s footsteps and kill ‘blasphemers.’”