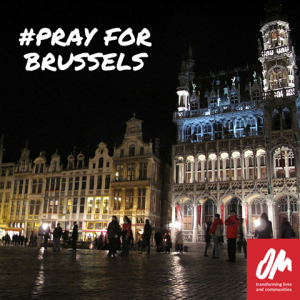 Belgium (MNN) — Belgium is a nation in grief.

Wednesday began three days of mourning for the victims of the Brussels airport and subway bombings. At the same time, the country remained on high alert as the manhunt for the suspected attackers continued.

Police and government officials say the attacks killed 34 people–including three suicide bombers–and injured 270 others. Because of the public transit stations where they took place, they also grounded travel.

Jerry Wiles, President Emeritus of Living Water International, spoke to us from Brussels. He and a Living Water team were at the airport awaiting their flight back to the United States after a visit to Liberia. Their group was evacuated along with hundreds of others to a nearby hangar (without their carry-on bags) where they waited out the immediate crisis. He says, “All the flights were cancelled yesterday. The airport was closed down. It’s still closed down. It’s considered a crime scene right now. We’re in hopes that we’ll fly on Friday, but there’s no guarantee of that.” 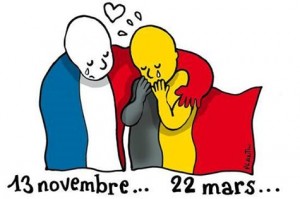 As they wait for the scene to clear, the Living Water team is taking the opportunity to help where they can. In some cases, it was just listening and offering quite comfort. “You know how the Lord works in these situations. It was pretty incredible just to see it. Of course, it’s pretty scary…and we dealt with a lot of people who had lost family members and co-workers from the airline personnel.”

Other Christians from Operation Mobilization Belgium came alongside the Red Cross to give aid. Wiles says it’s not really a surprise. “I think followers of Jesus are prepared to minister to people in times like this, to pray with them, to share with them and just try to demonstrate hope and concern in the midst of fear and chaos.”

Another concern is the timing of the attack: Holy Week. Religious leaders were “shocked and saddened” by the terrorist attacks in Brussels, but some shared concern over security questions: Christians expect to gather in churches to observe Maundy Thursday, Good Friday, and Easter services. It is wise to be alert now, Wiles observes, but “we need to pray for followers of Jesus, for the Church, to keep the focus not so much on the fear and the problems as much keep our focus on the Lord and His kingdom purposes, and always being prepared.”

Even as Brussels creeps cautiously throughout the day, Paris looms in the background. Wiles acknowledges that “there’s still a lot of concern. There’s still a lot of  thinking: ‘Maybe there’s going to be another one?’ A lot of people are on edge right now here, so [pray] for the people who are being affected, the families, the co-workers.” 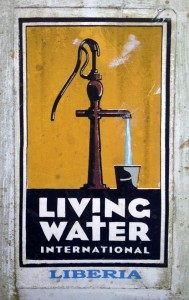 It’s more than an afterthought, but as far as Liberia goes, and as to why Wiles was there, it was to see how much has changed since the Ebola crisis.

There are still devastating challenges facing the country in the wake of the Ebola crisis. Health and education services are crippled by the loss of front-line health workers, broken families and relationships after so many lives lost, children left as orphans, and survivors still stigmatized by neighbors.

However, because of the support from the body of Christ, Wiles says God continues to equip and transform communities with safe water, hygiene education, and the Living Water of the Gospel.

Isaiah 58:8 says, “Then your light will break forth like the dawn, and your healing will quickly appear; then your righteousness will go before you, and the glory of the Lord will be your rear guard.”