At least 49 of the men, women, and children killed in the attack were Christ-followers, reports Bruce Allen of Forgotten Missionaries International. 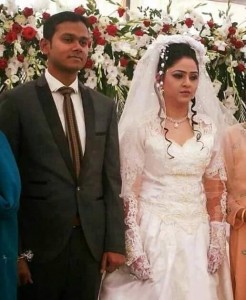 “Our partners and their families are okay, but they’re starting to tell the stories of these victims and showing pictures,” shares Allen.

“A newlywed couple, just fairly-recently married, and both of them were killed. A young man who worked in the hospital.”

Major news outlets like BBC News, The Guardian, and others claim in their reports that “most of the attack victims were Muslim.” However, FMI’s National Director has spoken with victims’ families and gathered documentation to confirm the death toll of Christians is indeed 49.

Please continue to pray, as that number could rise in the days ahead. There are believers among the hundreds of people seriously wounded during the suicide bombing on Easter Sunday. Pray that they will receive the care they need, and that their circumstances could lead to Gospel opportunities.

On Easter Sunday, thousands of families entered through the gates of the Gulshan-e-Iqbal Park, a large recreational space in Lahore. The crowd at the park that day was “unusually large,” an eyewitness told Dawn News. 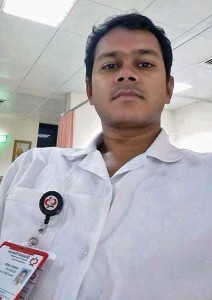 Haroon Wasim was a Christian victim of the deadly Easter deadly attack in Lahore, Pakistan. He worked at Shaukat Khanum Memorial Hospital as a nurse. The young medic was celebrating the holiday in Gulshan-e-Iqbal Park, when the terrorist of the Taliban blew himself up in the crowded leisure land and claimed the lives of 72 innocent people.
(Photo, caption courtesy FMI)

When a suicide bomber entered the park and triggered his explosives, the resulting detonation took 70 lives and wounded hundreds of people.

“Not all the victims were Christians; there were a significant number of Muslims in the park as well. But, the faction of radical terrorists that claimed responsibility for the attack…made it very clear that they were targeting Christians,” says Allen.

Following the bombing, Punjab–the province where Lahore is located–was put on “red” alert. The leadership team of FMI’s ministry network advised all pastors and church planters in the province to “avoid unnecessary travel.” Ministry is continuing today, but in limited fashion.

Allen is requesting prayer for the following:

The Taliban’s Pakistani branch–Jamaat-ul-Ahrar–claimed responsibility for the Easter bombing, but the attack isn’t necessarily an isolated incident. Yesterday, the group issued a new threat via Twitter.

Terrorists are not the only threat to Pakistani Christians. At the same time as a suicide bomber wreaked havoc in Lahore, thousands of demonstrators made a set of demands clear on the streets of Islamabad.

According to The Guardian, these are among the protestors’ top requests: 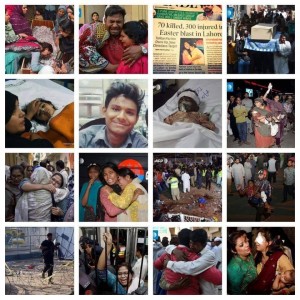 A montage of people who were killed, injured, and mourning after the park bombing which killed more than 70 people, the majority of whom were Christian.
(Caption, image courtesy of FMI)

As recounted here, Mumtaz Qadri came to fame in Pakistan when he murdered then-governor Salmaan Taseer. Taseer was an outspoken critic of Pakistan’s infamous blasphemy laws, which are often used to persecute the Christian minority.

Qadri was executed at the end of February, in accordance with Pakistani law. However, resolute calls for Bibi’s death have been on the rise ever since.

“The Christian community had the feeling that there would be backlash from Qadri’s execution, especially on festivals like Easter,” Shamoon Gill, a Christian activist and spokesperson for the All Pakistan Minorities Alliance, told The Express Tribune.

How to help Pakistani Christians

This week’s events make one thing abundantly clear: Pakistani Christians are in trouble.

“They want people around the world to understand their plight,” says Allen. “When we hear a story like this; it’s easy to focus on [the statistics]: the total number of people killed, the number of people injured.

“Those numbers represent individual lives and individual families that are impacted.”

Now that you know, here’s what you can do to help:

“[Pakistani Christians are] trying to come together as a community to support one another. That’s a very crucial element…to ‘bear one another’s burdens,'” Allen says, adding that Christians in the West should follow suit.

“When one part of the Body (of Christ) suffers, we all suffer.”

Though short-term mission trips to Pakistan may not be possible, you can still send believers the help they need through FMI. Better yet, that assistance gets multiplied, by God’s grace. 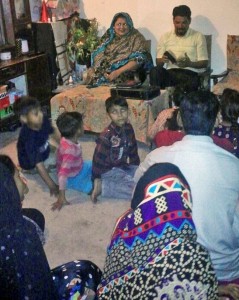 Pakistani Christians gather in the home of a church member in Lahore for Easter worship and fellowship in the hours prior to the bombing.
(Photo, caption courtesy FMI)

“When people provide resources for our church planters and evangelists, the impact isn’t just ‘one-to-one’ accounting,” explains Allen. For example, when donors provide a Bible, “it’s amazing how many people share that one resource.”

A single Bible is often shared by 6 Christian families. Listening groups of up to 20 people gather on a regular basis to hear God’s Word from Scripture CDs.

Equip national missionaries through FMI’s Tangible Resources Fund. Or, you can partner with a Pakistani pastor through monthly sponsorship.

“To support one of the church planters is a great encouragement to them– to know that there is someone praying for them and their ministry…and supporting them financially, so they don’t have to leave the ministry.”