Jailed Advocate for Religious Rights in Egypt Released on Bail 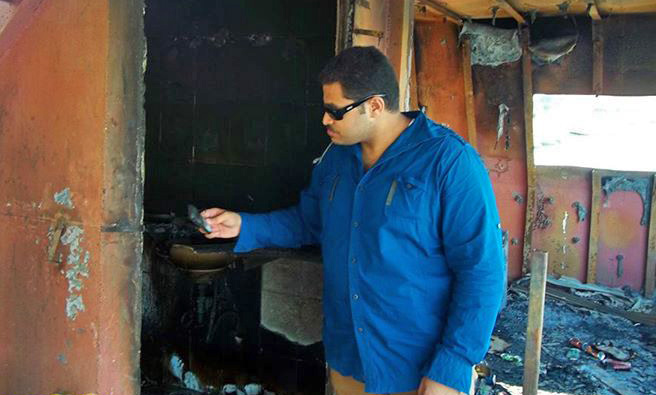 ISTANBUL, Turkey, June 22, 2016 (Morning Star News) – A noted Coptic human rights activist arrested in May and accused of belonging to a terrorist organization was released from prison Tuesday (June 21) after posting bail.

A judge in the Al-Wayly Court of Appeals on Saturday (June 18) set a 10,000 Egyptian pound (US$1,125) bail for Mina Thabet, 26, director of the Minority and Religious Groups Department at the Egyptian Commission for Rights and Freedoms (ECRF). Attorneys for the state on Monday (June 20) lost an appeal against the decision to grant bail. Processing of Thabet’s release paperwork delayed his release until Tuesday (June 21), contrary to media reports claiming he had been released earlier.

Sitting at home hours after his release, Thabet said he was relieved to be out of prison.

“I am happy but angry for being arrested in the first place,” he said. “The feeling of being in prison for defending human rights and my country was ‘absurd.’”

Thabet is well-known across Egypt as an advocate for the country’s minority groups, primarily the Christian community, and he has worked tirelessly documenting persecution against the minority group and the government’s apparent apathy toward protecting Christians or resolving their problems. Because of his advocacy efforts, sources said, government authorities have singled him out and harassed him on multiple occasions.

Thabet had expected arrest because of previous threats from security agents working for the Ministry of the Interior.

On May 13, at 3 a.m., several heavily armed, plain-clothes security officers forced open the door of Thabet’s Cairo apartment and, without identifying themselves or producing a warrant, ransacked the apartment, verbally abused Thabet’s mother and brother and then forced Thabet into an unmarked car.

After the arrest, Thabet had to endure close to 12 hours of what he called “traditional Egyptian police treatment.” Thabet said he was slapped repeatedly, insulted and humiliated, then finally threatened with bodily harm including threats to attack him sexually.

The next day, after appearing in court, Thabet said that with the exception of not being able to go to the hospital for severe back pain, his treatment improved. He was moved to a holding cell in a Cairo police station, where he spent much of his time alone, segregated from prisoners accused of non-political crimes.

Security officials have accused Thabet of a litany of crimes, including membership in a terrorist or banned group and inciting terrorist attacks on police stations. He also has been accused of using threats of violence to prevent the president from performing his duties, inciting youth to use force to overthrow the government, using the Internet to incite a terrorist act, inciting protests, spreading false information about the country meant to disrupt public order and damage national prestige, harming citizens and the public interest and possessing documents that would incite people to overthrow the government and change the constitution.

The evidence against Thabet, according to Amnesty International, consists of an illustration of the Virgin Mary, a copy of the International Covenant on Civil and Political rights, papers on religious minority groups and a paper on Egyptian political party Bread and Freedom. The charges have not been sent to court for formal indictment, and no date has been set for another hearing.

If Thabet is tried and found guilty, the charges could carry a life sentence in prison.

Mohamed Lotfy, executive director of the ECRF, said the state contrived false accusations against Thabet as “a legal cover for arresting activists.”

Thabet has researched and reported on many of the numerous issues the Christian community faces in Egypt and is considered “one of the pillars” of human rights advocates in Egypt by Amnesty International.

Thabet has shed light on the de facto Dhimmi status of Copts in Egypt; unexplained slayings of Copts in the Egyptian military; the disproportionate numbers of Copts in Egypt that are kidnapped for profit; a long-standing epidemic of violence against Christians in Egypt; “weaponized” blasphemy laws being used against the Copts; discriminatory laws against Christians regarding building houses of worship; and numerous acts of persecution against those who leave Islam to embrace Christianity. Thabet was one of the founders of the Maspero Youth, a group of Coptic Christians seeking basic human rights and a member of the Coalition of Minority Groups.

Thabet said being imprisoned gave him deeper insight on the problems the Egyptian people are facing. While Thabet was imprisoned, two attacks took place against Coptic Christians in Egypt.

On May 20 in the village of Al-Karm in Minya Governorate, a mob of about 300 Muslims rioted following a rumor of a romantic relationship between a Christian man and Muslim woman. Sources said numerous Christian properties were attacked and, most shockingly, the mob dragged the mother of the Coptic man, a 68-year-old woman, into the street, stripped her naked and then beat her.

Numerous politicians, Islamic religious figures and media personalities claimed reports of the incident were untrue, but evidence from the scene collected by Copts led Egyptian President Abdel Fattah el-Sisi to issue a statement condemning the attacks and promise compensation for the damages and justice for the victims.

In a separate incident, on June 17 after noon prayers in the village of Amriya, south of Alexandria, a Muslim mob reportedly gathered outside a Coptic-owned construction site of a multi-story apartment building. The Muslim villagers accused the Copts of building a church and attempted to destroy the building.

As police looked on, according to local media reports, the mob assaulted Coptic men in the village, attacked and looted several Christian-owned homes and a Coptic community center, all while chanting, “Islamic, Islamic! Egypt will remain Islamic!” They also burned a motorcycle and vandalized a priest’s car.

Police later arrested six Muslims and six Copts, including the owner of the construction site. The Muslims were released with no charges, in time to break the Ramadan day-time fast, but the Christians were charged with holding prayers without permission and building without permit, then released the following morning.

“I had a lot of time to think and see what are the issues are, who I am defending,” Thabet said. “It gave me a taste of what they go through. It gave me more strength to defend human rights issues.”