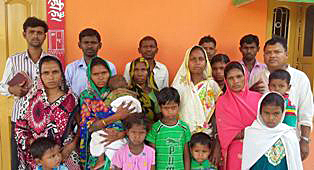 NEW DELHI, June 29, 2016 (Morning Star News) – A month after a crowd of village Hindus in Jharkhand state, India summoned 25 Christians, tied up six of them and beat them with sticks, some of the assailants ran into one of the Christians and asked if he was still worshipping Christ.

The Hindu extremists in Hunter village, Palamu District came across Gunni Bhuiya on June 14 on an area road. Bhuiya told them he still believed in and worshipped Christ, and the Hindu extremists manhandled him and threatened to kill him, Christian leaders said.

“They told Bhuiya that as the Christians are still worshipping Christ even after they had received severe beatings, they were now going to kill them,” area pastor Sanjay Kumar Ravi told Morning Star News.

Area Christians are living in fear as the Hindu extremist forbid them to worship, boycott them economically and threaten to kill them, while police threatened to fine them if they continued worshipping publicly, the leaders said.

Hindu extremists led by Dilip Chandra, Ram Chandra Vanshi and Dil Narayan Yadav on May 8 summoned the 25 Christians from six families to a public meeting, forcing them into vehicles and taking them to a middle school on the outskirts of the village.

“About 100 people from three neighboring villages were waiting when we reached the place and started to tell us that it is wrong for us to pray to Jesus and that we should follow Hinduism and perform puja (Hindu rituals) to the idols only,” Pastor Ravi said.

The Christians refused. Rather, Pastor Ravi began sharing his testimony with the crowd, saying Christ had healed him from an illness in 2007, and that he has followed Him since then.

“The pastor’s testimony enraged the crowd more,” the Rev. Akash Nandi, an area Christian leader, told Morning Star News, “and they started to beat him and the other five Christian men while they shouted that they should renounce Christ or else they will kill them. They told them to chant, ‘Jai Shri Ram [Hail Lord Ram],’ perform the puja and worship the idols there and then.”

When the Christians refused, the furious Hindu extremists threatened to kill and bury them.

“They shouted to each other to bring kerosene oil so that they could burn us all,” Pastor Ravi said.

Nandi said the Christians told them, “Do whatever you like, we are not going to leave Christ at any cost.”

The extremists then tied the hands and the legs of six Christian men and punched, kicked, slapped and beat them up with sticks, the leaders said. The assailants then hung them upside down, took them down and beat them again.

As the abuse went for about half an hour, a 5-year-old child, Eraj Ram, begged the assailants to stop beating his father, Naresh Ram.

“He folded his hands and begged them to stop beating his father, however, the extremists caught him by the collar and threw him aside,” Pastor Ravi said.

Shouting that they should not worship Christ anymore, the extremists then pushed the Christian men to the ground and stomped on them, the Christian leaders said.

All six men were bleeding from their mouths, Naresh Ram’s hands were broken and Pastor Ravi sustained an internal injury that left him with severe chest pain, along with cuts on his hands and abrasions over much of his body. Four other unidentified Christians suffered cuts and wounds on their mouths, eyes, hands and legs.

“The extremists threatened to tie up the women as well while they mocked and hurled all sorts of vulgar abuse at them,” Pastor Ravi said.

The assailants told the Christians to leave the village or else they would shave them, burn them and set their houses on fire, he said. The Christians managed to return to their homes and left the village at dawn the next day. At Ramgarh village, they received medical treatment from a local doctor.

Later that morning, the Christians went to Ramgarh police station to report the attack to police, but officers declined to register a case, and on May 10 they summoned the assailants to the police station. About 50 of the Hindus showed up to meet with three area Christian leaders among the 25 Christians who arrived at the station. Police forced the Christians to sign a statement that they would worship only in their homes or else be fined 10,000 rupees (US$150), along with other possible punishments.

“We were forced to sign the bond, we have no other choice as we have nowhere else to stay except in the village,” Pastor Ravi said.

“Our names were also cut off from the list where houses were allotted to the villagers by the state authorities,” Pastor Ravi said.

Likewise, on June 10 the Hindu extremists threatened Dharaya Singh and his wife Sumitra Singh, saying they would keep them from plowing their land and drive them from the village if they continued to worship Christ.

“We can only pray in our homes with our respective family, our movements are closely watched and the extremists told us to leave Christ and threatened to beat us up at every opportunity they could find,” Pastor Ravi said.