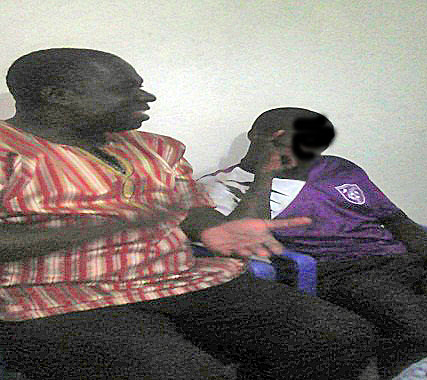 NAIROBI, Kenya, January 12, 2017 (Morning Star News) – Islamic extremists ambushed a church leader in eastern Uganda last week after a sheikh they had sent to assassinate him at a church service instead became a Christian, sources said.

In Amuria, about 170 miles (280 kilometers) northeast of Kampala, Bishop George Edweu of the Pentecostal Upright Church had arrived at his church building at 5 a.m. on Jan. 2 for a morning devotion when he saw a young man on the ground. He got out of his car to attend to him, he told Morning Star News.

When he reached the young man, six masked men appeared and took hold of him, demanding that he reveal the whereabouts of the sheikh (Islamic teacher) who had converted at his church service, a 24-year-old father of two whose name is withheld for security purposes. Some of the gang began slapping and kicking Bishop Edweu; others hit him with sticks.

“As I fell down, a vehicle with bright lights flashed, which scared them away, and they disappeared into the nearby bush,” Bishop Edweu said. “The vehicle arrived and took me into the church compound. Inside the church building we found a letter with a threatening message: ‘We are going to destroy your church unless you show us where [name withheld] is.’”

Sunni Muslim extremists had sent the sheikh, trained in Islamic proselytization, to the church’s worship service on Dec. 4 to kill Bishop Edweu, the pastor said.

As the bishop was preaching on hearing and understanding the voice of God, the sheikh was sitting among the congregation of 200 people when the power of the gospel convicted him of sin, Bishop Edweu said. The young man rushed up to the podium and fell at the preacher’s feet.

Bishop Edweu said he stopped preaching and questioned the young man. As tears rolled down the sheikh’s cheeks, he answered, “I was sent to come and attack, to kill the pastor and destroy the church,” according to the bishop.

He repented as the shaken congregation looked on, Bishop Edweu prayed for him, and the would-be assassin put his faith in Christ as Lord and Savior, the pastor said.

News of the former sheikh’s conversion hit the community like lightning, and the young man knew he had to go into hiding. He, his wife and two children, ages 2 and 4, took refuge at an undisclosed location.

Since then area Muslims have been announcing his conversion weekly as they gather for mosque prayers. A local Christian resident told Morning Star News that on Fridays he has heard over the mosque loudspeaker, “[Name withheld] needs to die for forsaking Islam.”

The bishop and his congregation fear more persecution could be imminent.

The incident was the latest in a series of anti-Christian attacks in eastern Uganda. Muslim relatives of a young woman in eastern Uganda who put her faith in Christ at a Christmas service coerced her into taking poison at a New Year’s celebration, she said. Sandra Summaya, 24, of Bugayi village in Pallisa District, told Morning Star News that she converted to Christianity at a worship service on Christmas Day.

On Christmas Day Muslims in eastern Uganda beat Christians at a worship service and wrecked the home of a single mother on Christmas Eve, sources said.

On Dec. 8, relatives of a former Islamic teacher attacked his 60-year-old mother for becoming a Christian, wounding her head and breaking her hand, sources said. Aimuna Namutongi sustained a deep cut on her forehead. She and her son, 30-year-old Malik Higenyi, were trying to gather cassava at 10 a.m. on the homestead he had been forced to abandon in Bufuja village, Butaleja District, after Muslim relatives threatened to kill him if he returned.

Higenyi, whom Muslim relatives had beaten unconscious on Nov. 13 after he publically confessed having embraced Christianity, managed to escape the fury of those who arrived at his farm on Dec. 8 while he and his mother were trying to harvest something to eat, he told Morning Star News.

Namutongi became a Christian after visiting her ostracized, injured son on Nov. 26 and listening to his faith journey, a local source said. He has continued to receive threatening messages, he said.

On Oct. 20, 2016, Muslims in Kobolwa village, Kibuku District gutted the home of a Christian family for housing two boys who had been threatened with violence for leaving Islam.
Stephen Muganzi, 41, told Morning Star News that the two teenaged boys sought refuge with him on Oct. 16 after their parents earlier in the month learned of their conversion, began questioning them and threatened to kill them. The two boys, ages 16 and 17, had secretly become Christians nearly seven months before.

On Sept. 18, 2016, a Muslim in Budaka District beat his wife unconscious for attending a church service, sources said. Hussein Kasolo had recently married Fatuma Baluka, 21-year-old daughter of an Islamic leader in a predominantly Muslim village, undisclosed for security reasons.

On Aug. 10, a Christian woman in eastern Uganda became ill after she was poisoned, she said.
Aisha Twanza, a 25-year-old convert from Islam, ingested an insecticide put into her food after family members upbraided her for becoming a Christian, she told Morning Star News. She and her husband, who live in Kakwangha village in Budaka District, put their faith in Christ in January 2016.

In Busalamu village, Luuka District, eight children from four families have taken refuge with Christians after their parents beat and disowned them for leaving Islam or animism, sources said. The new-found faith of the children, ages 9 to 16, angered their parents, who beat them in an effort to deter them from sneaking to worship services, and on June 29, 2016 the young ones took refuge at the church building, area sources said.

About 85 percent of the people in Uganda are Christian and 11 percent Muslim, with some eastern areas having large Muslim populations. The country’s constitution and other laws provide for religious freedom, including the right to propagate one’s faith and convert from one faith to another, but Christians in eastern Uganda are suffering continual attacks by non-state figures.