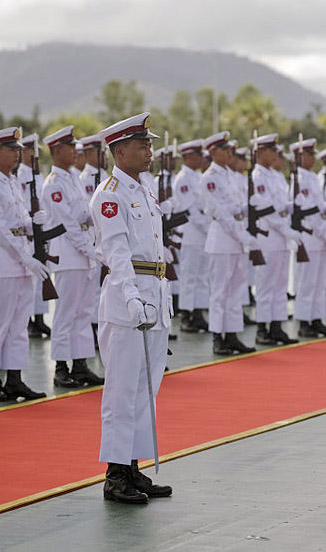 The Burma army accused Dom Dawng Nawng Latt and La Jaw Gam Hseng of serving as “informers and spreading false news on behalf of the armed insurgents” in Shan state, the Myanmar News Agency reported on Thursday (Jan. 19), citing a report by the Information Committee of the State Counsellor’s Office.

The state news agency reported that the two clergymen “gave information of the Tatmataw’s [Burma army’s] activities to the armed groups, gave them money and spread rumors to foreign media so as to arouse mistrust of the government among public and international communities.”

The accusations surfaced amid reports by domestic and international media that the two clergymen went missing after helping Burmese journalists cover the Burma military’s Nov. 23-24 (not Dec. 3, as initial reports indicated) bombing of a Catholic church and a school in Mong Ko, northern Shan state.

“The two suspects made repeated connections with the Kachin Independence Army (KIA) armed group before and during the Mong Ko attacks and recruited new troops for the armed group and transported oil,” the Myanmar News Agency reported.

Relatives and area residents had filed missing persons reports with local authorities, and fears arose that the military had killed the assistant priests when officials gave no word of their condition more than two weeks after their arrest. The Burma army’s confirmation that military authorities arrested the two men on Dec. 24 contradicted presidential spokesperson Zaw Htay’s denial that the military had detained them.

“According to our ground report, they were taken by the Kachin Independence Army, not the [Burma] military,” Htay reportedly said on Jan. 10.

According to a report by the Ministry of Defense, the Burma army didn’t reveal the arrest and accusations against the two assistant priests earlier “due to the security of hardcore informants and for questioning the arrestees in detail in line with the rules and procedures, making investigations and approvals by taking time for finding the truth.”

Burma army officials said the two men were being investigated and will be tried in a civilian court.

“Those arrestees will be handed over to the relevant police station systematically in order to take action against them under the law,” the Myanmar News Agency reported.

The state media outlet reported that the two assistant priests had been “pursued earlier by government troops on 4 December, but the suspects fled to a neighboring country [China border] before they returned to Mong Ko on 24 December, when they were finally arrested.”

Sources said the clergymen had fled the area on Dec. 4, when the Burma army asserted that it had restored order to Mong Ko, and returned to the area on Dec. 7. The assistant priests brought journalists to Mong Ko on Dec. 17 to view the bombing damages of the government forces, the sources said.

The clergymen remained in Mong Ko until Dec. 24, when they went to the Byuha Gon military base to negotiate the release of a civilian couple who had complained to army officials about the destruction of their house, sources said. Military officials released the couple and detained the clergymen, they said.

“The priests believed that there would have been no problem with the Burma army, as they were purely religious leaders from the church,” said a source who requested anonymity. “But the Burma army arrested them after releasing the couple.”

State media and the military have released no information on the two men’s condition. Burma army troops are known to beat and torture suspects during investigation and interrogation in military custody.

Relatives and colleagues are concerned about the safety and health of the two assistant priests. Hawng Naw, an aunt of Hseng, said she felt powerless but was praying for their wellness and release.

“They are our family members,” she said. “We have no idea about where they are staying and their health condition. But I can do nothing. All I can do is to pray. I can’t even describe the pain I feel.”

Burma army officials reportedly said their troops continuously “carry out scrutiny to expose and arrest more hard-core members of insurgents and to ensure peace and stability of the region.”

The army claimed to have rebuilt the damaged church, according to a report by government newspaper, The Global New Light of Myanmar, in early last December. The newspaper also reported that more than 10,000 displaced residents had returned home in Mong Ko as stability was restored.

Armed conflicts between Burmese armed forces and ethnic separatist organizations broke out in Shan state in November, forcing over 50,000 refugees in total to flee to the border with China.

After more than five years of intensified conflict since Burma violated a 17-year cease-fire in 2011, many Kachin face protracted displacement and are desperate to return home, according to a report by the U.S. Commission on International Religious Freedom.

Burma is about 80 percent Buddhist and 9 percent Christian. The government has recognized the special status of Buddhism in Burma and promoted it as a means to consolidate support.