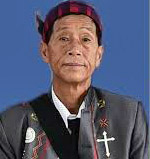 Pastors Dom Dawng Nawng Latt, 65, and 35-year-old La Jaw Gam Hseng face at least three years in prison under one charge and at least five years on another. They were arrested on Dec. 24 for helping journalists cover the Burma military’s Nov. 23-24 bombing of the St. Francis Xavier Catholic Church building, sources said.

“They helped the journalists because local priests were not allowed to speak to media,” Zau Rau, an official from Kachin Baptist Convention (KBC) in Muse Town, Shan state, who visited the two pastors this week, told Morning Star News. “We even heard that the Burma Army hid the priests from media. So, they spoke on behalf of the Catholic Church.”

An officer from the Muse town police station who requested anonymity said Maj. Kyaw Zin Htun of the Light Infantry Battalion 66 of the Burma army is the prosecutor who filed the charges under articles 17/1 and 17/2 of the Unlawful Association Act, which carry prison terms of at least three years and five years respectively. The Burma army has accused the two pastors of recruiting and spying for ethnic armed groups such as the Kachin Independence Army (KIA), which is fighting government forces in northern Shan state, eastern Burma.

“The prosecutor charged those [two pastors] with illegal acts for contacting an illegal organization under Article 17/1 and Section 17/2,” the police officer said.

The military has accused the two men of serving as “informers and spreading false news on behalf of the armed insurgents,” according to a report by the Information Committee of the State Counsellor’s Office on Jan. 19.

The KBC’s Rau said the two pastors denied the charges.

The KBC is the largest Baptist organization in Kachin state. Rau said that the two pastors witnessed the bombing of the Catholic church building. They photographed the damaged building and helped journalists to take photographs of it, he said.

“They took journalists and explained how the church was bombed,” Rau said.

He said the two pastors were in good health, adding, “We didn’t see any wound on their bodies.”

The military, which had detained the two men at its base in Mong Ko, handed over the two pastors to civilian police custody in Muse town on Jan. 22. The pastors had gone to the Byuha Gon military base to negotiate the release of a civilian couple who had complained to army officials about the destruction of their house, sources said. Military officials released the couple and detained the clergymen, they said.

Armed conflict between Burma and ethnic separatist organizations erupted anew in northern Shan state in November, forcing over 50,000 refugees in total to flee to other areas of the state and the border with China.

After more than five years of intensified conflict since Burma violated a 17-year cease-fire in 2011, many Kachin face protracted displacement and are desperate to return home, according to a report by the U.S. Commission on International Religious Freedom.

Burma is about 80 percent Buddhist and 9 percent Christian. The government has recognized the special status of Buddhism in Burma and promoted it as a means to consolidate support.