Pastor in India Perseveres amid Persecution by Hindu Extremists

Assailants demand he renounce Christ for savage beating to end. 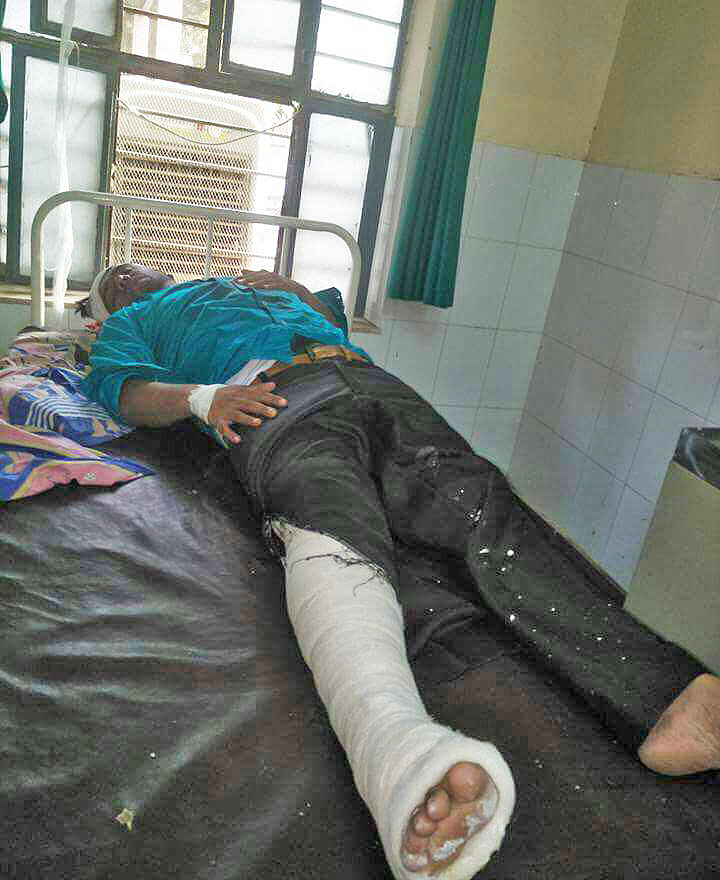 HYDERABAD, India, August 31, 2017 (Morning Star News) – A band of Hindu extremists who had snuck into a house-church service beat a pastor with steel rods and sticks, one of them yelling that they would stop if he shouted, “Hail, Lord Ram [Jai Sri Ram]!”

“I remained mum,” pastor Harjot Singh Sethi, 26, told Morning Star News. “I did not even squeal from pain. My mouth was shut as they beat me.”

He suffered serious head and leg injuries in the Aug. 16 attack in Dabli Rathan village, Hanumangarh District, in Rajasthan state.

“I am glad the Lord considered me worthy to share His pain,” he said. “I don’t have to be treated special or elevated because I am persecuted. My Lord was crucified, His disciples were persecuted, and violence against Christ-followers is not a new thing. This was to come.”

The young pastor and eight other Christians were attacked on the terrace of the home of Madan Lal Arora, where 20 people had gathered for worship. Police Station House Officer Jagdish Prasad said the assailants were members of the Hindu extremist group Bajrang Dal.

“While the pastor and the Christians were praying, Bajrang Dal activists accused them of [forced] conversions and started beating them,” Prasad told Morning Star News. “We were able to detain six of the accused, and the investigation is on.”

Pastor Sethi, of Jalandar District in Punjab state, was visiting Arora, a schoolteacher in Rajasthan.

“It was first planned that we would conduct the prayers in our house, but by evening believers from other villagers had already arrived, so we left the entrance gate open for any more to join us,” Arora’s daughter, Shikha Arora, told Morning Star News. “It was just 40 minutes into worship. I sang hymns with my friends standing in front of the gathering, and I noticed two men seated right before me. I did not know they came to attack. They sat quietly when we were singing.”

Pastor Sethi had risen to speak and was bowed in prayer when two men pushed through the congregation of 20 and attacked him, she said.

“When the two started beating the pastor, their group waiting outside the house also got upstairs, and they brought steel rods and wooden sticks,” Shikha Arora said. “We pleaded with them, ‘Please don’t beat our pastor. What did he do? What did we do to you people? Did he speak against any leader or any religion? Why are you beating him?’ They beat us too.”

The pastor told Morning Star News he couldn’t understand where the 10 people who began beating him had come from.

“One man slapped my wife and pushed her, and she fell down,” he said. “Women from the gathering came to surround us to protect us from the assailants, but the assailants beat them too. It has been two weeks, but there is still a sharp pain in my head even as I talk to you at this moment.”

A convert from a Sikh family, Pastor Sethi said he had led services at the house on two previous occasions.

“As a Christian, I will not take the defeat; my Lord is an ever-victorious King. His gospel will be preached among them,” he said. “We are going to share the gospel in that region with the government’s permission soon – we are making arrangements for it.”

He and other Christians went to the Hanumangarh Sadar Police Station, where he bled for 90 minutes while officers registered a First Information Report (FIR) without even taking statements from them, he said. They put his age as 40 in the FIR.

“Can you see it? Even the police are afraid of the Bajrang Dal,” he said. “They slapped sections from the Indian Penal Code with lighter punishments on them. The Bajrang Dal people arrived, and they spewed derogatory, extremely foul words against Christ, the believers and me too. They could not spare the women either. The police did nothing to stop them.”

The Hindu extremist who ordered him to shout, “Hail Lord Ram” while they beat him is roaming free, he added, though the assailant posted videos of the attack on Facebook.

SHO Prasad told Morning Star News that the scene at the police station was tense.

“It took us some time to get the pastor out and admit him in the hospital, the police station was mobbed by Hindu activists,” Prasad said. “The Bajrang Dal are very aggressive groups. We did not want things to go out of hand.”

“Miscreants in the society who cannot rise to fame by doing good works are resorting to violent acts to spread hate,” she said. “The pastor suffered injuries in head and his leg is fractured, the believers around also were beaten. Soon after I received the call, I alerted the police authorities and the collector. The pastor was admitted in the hospital.”

Pastor Sethi said he wanted his church to understand that if is the Lord’s will, they must submit to God’s will and not renounce Christ in the face of violence.

“My heart is rejoicing over Psalm 91, my Lord is my fortress, my refuge, my salvation, what more do I want?” he said.

Shikha Arora said the attack reminded her of a verse in a Punjabi Christian song, which sang as tears flowed down her cheeks: “Prabhu tumhare dard mein humein bhi shaamil karo [Lord, please let me also partake in Your pain].”

“Our faith in Christ multiplied, we are ready for anything,” she said. “Anything for Christ.”