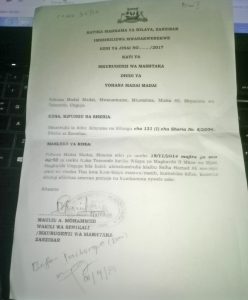 NAIROBI, Kenya (Morning Star News) – A judge failed to show up at a hearing for a pastor facing accusations of child abuse in a case in Zanzibar that Muslims have kept alive after charges were twice dismissed, sources said.

Shortly after charges were filed on the semi-autonomous island off the coast of Tanzania in November 2014, police closed the case against pastor Yohana Madai of the Free Pentecostal Church of Tanzania in Tomondo village, near Zanzibar Town. They cited lack of evidence and witnesses, according to the Pastors Alliance of Zanzibar.

The accusers got the case re-opened last April in order to slander the pastor and drain the 70-member church resources, according to the alliance.

“The court is dragging this case out, which is really becoming costly and hurting the church,” Pastor Madai said. “Why should a hearing be called off at the last minute?”

The pastor and his attorneys were given no reason for the judge failing to show up at the Oct. 16 hearing, sources said. The next hearing is scheduled for Nov. 21.

“I am hurt by the alleged assault labeled against me, which is stressing my family members as well as the church,” Pastor Madai told Morning Star News. “Some of my members have left the church due to bad soil that the Muslims have smeared on me.”

The charge against him has been dropped twice. A 9-year-old girl pounded on the door of his church building on Nov. 10, 2014 with intent to disrupt worship, according to the alliance. The pastor ran out and took her to local government leaders to give her a warning, and village leaders resolved the issue after meeting with her mother, Gladness Mohamed Ngaa.

The next day, however, Ngaa went to police and filed a charge of child abuse, saying the pastor had touched her daughter’s breast and removed her veil – a crime that carries a prison sentence of 30 years.

Police summoned Pastor Madai for a statement, but when he arrived, the officer-in-charge jailed him without taking a statement or listening to anything he said, according to the alliance. The next day leaders from his church registered a complaint about his incarceration, and he was released on condition that he report back to the police station.

When Pastor Madai reported back to the station a few days later, according to the alliance, the officer-in-charge told him that investigations had turned up no evidence of wrongdoing and no witnesses, and that the case was closed.

When that officer was transferred to the Tanzania mainland earlier this year, however, the girl’s mother – now accompanied by a sheikh (Islamic teacher) and other Muslims – filed the charges against him again in Zanzibar, the alliance leader said.

The pastor was summoned for a court hearing in Mwanakwerekwe, on the outskirts of Zanzibar Town, on the child abuse charges in early March, but again the accuser was unable to produce any evidence or witnesses, he said. Two other hearings with the same outcome took place, and a judge again dismissed the charges on April 6.

He was ordered set free, but when the case was dismissed, one of the Muslims accompanying Ngaa rushed out to meet with his associates and police officers waiting outside the courtroom, according to the alliance. As Pastor Madai left the courtroom, they promptly arrested him on unspecified charges.

“We as a church read mischief in the handling of our pastor’s case, which is intended to cause a lot of harm and stress to our pastor as well as our church,” said a church leader who requested anonymity. “Muslims are now magnifying the issue, saying that our church has an immoral pastor.”

The burden on the church is huge, he added, as members must pay for the pastor’s legal fees along with his living expenses.

Area Muslims are harassing the congregation in other ways.

“Our church members who are in the rental houses with Muslim neighbors are not allowed to turn on their radios and TVs or listen to Gospel music,” the pastor said. “If you do, you are threatened with having these items destroyed, and there is pressure to vacate the premise. My church members have been taken captives. To make the matter worse, some of our ladies were beaten for putting on short dresses.”

Christians find it difficult to receive a fair court hearing in Zanzibar, where several land cases are pending, he added. Pastor Amos Lukanula of the Pentecostal Assemblies of God has been battling area Muslims in court since 2007, when they issued a court-ordered stop to his church erecting a building despite having met all legal requirements to do so. The church lost the case in July 2017 after spending $100 dollars monthly since 2007.

The pastor needs prayers along with financial and legal assistance, according to the alliance: