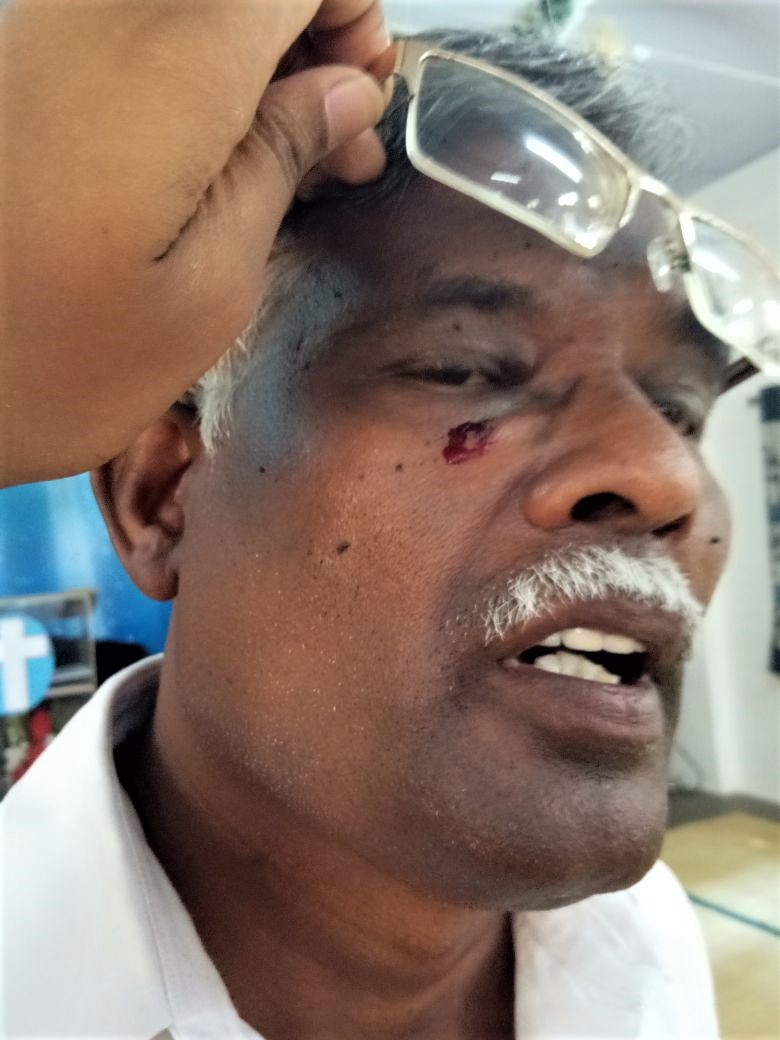 HYDERABAD, India, April 27, 2018 (Morning Star News) – Pastor Sunder Singh’s church in southern India was about to take Holy Communion the day before Easter when he saw smoke billowing in from a window pane.

He was sitting across from the pulpit as a guest pastor was leading the service in Dharmapuri, Tamil Nadu state, where about 200 church members were gathered. Pastor Singh’s son, 23-year-old Jubal Clement, told Morning Star News that the smoke smelled like dry leaves burning, and that people started coughing and choking.

“But nobody moved, because we were in quiet and serious moments at the altar,” Clement said. “All of a sudden, there was a thud sound – thud, thud and thud again – stones weighing at least two kilos struck the windows on either sides.”

Pastor Singh rushed outside to find a young woman, a neighbor who started shouting obscenities at him.

“I cannot utter the words with my mouth, but I am praying for her heart,” the 54-year-old pastor told Morning Star News.

The neighbor was more than impolite. She and her mother tore off the pastor’s shirt, and then her father joined her in punching him. Throughout, Clement said, the derogatory remarks in foul language continued.

The mother and daughter duo later damaged Christians’ vehicles parked outside the church building and hoisted the flag of a Tamil Nadu religious and cultural organization formed to defend Hinduism, the Hindu Munnani, in the compound. They removed the saffron flag only after later police orders, Clement said.

“It is simple – they don’t want a church in their locality,” a source who requested anonymity said.

The family filed a physical assault complaint against Lakshmi Narayanan, his wife Nalini and their daughter Durga. Inspector M. Rathina Kumar of the Dharmapuri police station is a staunch supporter of Hindu Munnani, and he ensured there would be no registration of the case against the neighbors, the source said.

Moreover, the source said, the inspector appears to have persuaded revenue authorities to order an investigation into the church property. Established 25 years ago, the church has since received notices from the district revenue board ordering an enquiry into the documentation of the church and land ownership.

“That continued for weeks, with officials and police paying visits,” Clement said. “We submitted a complaint in Dharmapuri town police station believing the police had filed the case and will ensure fair investigation but, astonishingly, they have not registered the FIR [First Information Report].”

When Clement tried to submit videos of the attack at the Dharmapuri police station as evidence, he said, the police inspector shouted at him, “Are we running a Photoshop exhibition here? Or is it some photo contest? Get the hell out of here.”

Pastor Singh said the attack did not come to him as a surprise, as church growth brings persecution.

“We have shared the gospel and planted the seed of God’s Word the last three years and waited on Him,” he said. “This year, what we are seeing today is the plentiful harvest – believers have grown in numbers, they are doubled now. Persecution has brought us nearer to God as a church, as it is told Zephaniah 3:9, ‘For then will I restore to the people a pure language, that they may all call upon the name of the LORD, to serve him with one accord.’”

He said he has been receiving anonymous, threatening calls.

“I simply switch off the mobile phone and focus on my day as the Lord’s servant,” the father of two said. “I seldom pick up any calls these days.”

Easter Attacks
The Dharmapuri attack was just one of several during Easter in India. In Tamil Nadu’s Coimbatore District, Easter morning at Bethel Assembly church in the Maruthur area began with hymns of praise before three hard-line Hindus started shouting slogans and marched into the building.

A church leader identified only as Pastor Rajesh was standing at the pulpit when one of the Hindus entered the church and shouted for him to come out, the pastor’s wife told Morning Star News.

“They first threw stones, very heavy stones, which caused an injury to his head, and he was bleeding profusely,” said his wife, identified only as Johnsy. “I along with the church members pleaded for them to stop, but they attacked several times, at least six times, three at once, and when we attempted to call the police, at least 40 of their supporters came and surrounded us.”

Police registered a case against the assailants, she said.

Later in the day, the pastor was admitted at Mettupalayam Government Hospital for treatment.

“We are no longer gathering as church” Johnsy said. “The believers were petrified at the pelting of stones since we have small children strolling in the church premises when prayer services are conducted. And, a sudden attack as that on Easter Sunday can cause serious injuries or even death.”

“The state for all practical purposes has no governance, with the ruling groups still at war with each other,” Dayal said. “The RSS [Rashtriya Swayamsevak Sangh] and BJP [Bharatiya Janata Party] are also making a concerted effort to enter the state where for the last 70 years they have had no presence. The only way the BJP and its cadres of the Sangh can enter the state is by polarizing the communities on issues of religion.”

In Hyderabad, Telangana state, four Christians were arrested on Easter Sunday after Hindu extremists filed a counter-complaint against Christians who had reported them for attacking them.

With permission from police, New Blessings church members had begun a peaceful procession on Easter, singing hymns and distributing tracts, a female member of the church stated on a video widely circulated on social media, translated from the Telugu language.

“When we were about to wind up and return back to the church premises, in the last moment they [Hindu Jana Shakti members] attacked four Christians, and we went running back to their rescue,” she said.

When she and others tried to explain that they had already obtained permission, the Hindu Jana Shakti members seized her hand in a way that broke and twisted her bangles.

“They then turned to minor boys and started beating them,” she said.

One is seen forcefully applying vermillion to the pastor’s wife.

The Rev. Archibald Gonsalves, superior of the Carmelite Monastery, pointed out that this was the third year in succession that midnight services at the Monastery for Christmas and Easter have been stoned.

In Tamil Nadu state, on Good Friday (March 30) Catholics in Yercaud, Salem District, woke up to hear that their most-visited shrine, St. Anthony’s Grotto, had been demolished.

“At first we believed it was an act done by some unknown assailants, but later we got to know that workers sent by forest officials snuck into the woods that night and destroyed the grotto,” the Rev. Gregory, parish priest of Salem Diocese, told Morning Star News.

Parishioners suspect anti-Christian elements were behind the demolition since it was Good Friday night, he said.

“And also we had not received any prior notice,” he said. “The forest officials advised us not to file a complaint and that we can build the monument again if we wish to, which raises doubts.”

In Odisha state, unknown persons in Rourkela District broke the glass and stole statues from a grotto on Easter morning (April 1).

“That night the grotto engraved on the wall adjacent to the main gate, which was covered by a fiberglass and locked/sealed from outside, was demolished,” the Rev. Petrus Joseph Barwa of Rourkela Diocese told Morning Star News. “Despite the presence of guards to watch the premises at nights, some miscreants broke the glass and lifted the statues.”

The diocese reported it to police, and area residents found a disfigured statue of Mary in a dry riverbed, he said.

“It was sad and alarmed the members of the parish who gathered in the morning to celebrate Easter,” the priest told Morning Star News. “It could have been pre-planned by some religious fanatics to create communal disharmony, because a similar demolition of a smaller grotto happened in Bihabandh village also on the same day; it is just a 10-minute walk away.”

The head on a bull statue at a Sikh temple was also found broken that night, he said. Sikhs are another religious minority in India, with 20.8 million making up less than 2 percent of the population.

Odisha state, previously Orissa state, is the seat of much hostility toward Christians. Impunity for anti-Christian assaults in Odisha is verging on “official patronage” for the assailants, Dayal of the United Christian Forum told Morning Star News.

“There seems but little doubt that the attacks in northwest Odisha have been well-planned as if by some central group, and therefore smacks of a conspiracy,” he said. “There is need for an official enquiry into this, but with most government agencies themselves under a shadow of doubt, it is a moot question as to what sort of a commission or agency can be called to carry out such an investigation.”