Amid growing extreme Hindu nationalism in India, dozens of speakers have called for concerted action to uphold the country’s constitution and fundamental rights, at a conference to mark four years of government led by Prime Minister Narendra Modi.

“There is a grave threat to plurality,” Professor Ganesh Narayan Devy, a scholar on India’s religious and linguistic diversity, told the 25-27 May ‘Citizens’ Conclave’ on ‘Building an Inclusive India’ in New Delhi, attended by over 800 delegates from across the country.

“We are living at a time when you are questioned about the food you eat, about the god you worship and branded as anti-national for expressing a different view [contrary to Hindu nationalism],” said Devy.

“They [Hindu nationalists] demonise and attack us: 2017 saw a 20 per cent increase in the number of atrocities against Christians,” Tehmina Arora, a lawyer and director of rights group ADF India, told the conference.

On the status of Christian minorities, she added: “When you go to police, they hardly cooperate and often refuse to register complaints. There is a growing culture of impunity. We could file only 25 criminal cases, as against the 240+ incidents reported in the year.”

Instead, she said that anyone who is accused of converting Hindus “will be beaten up”. “You [can be] taken to a police station when you pray!” she added.

A pastor having a birthday party was recently arrested and accused of converting Hindus in southern Karnataka state, even though it is not a state which has an ‘anti-conversion law’ in place.

“Even I could be accused of ‘conversion’ for addressing this house [with many non-Christians],” Arora said, pointing to the “worsening intolerant atmosphere” during the government under the BJP, known for pursuing a Hindu-nationalist agenda.

She cited the instance of more than 50 villages in central Chhattisgarh state passing resolutions banning the Christian faith soon after the BJP government assumed office on 26 May, 2014.

Archbishop lambasted for call to prayer

“Look at the fuss over the [Delhi] archbishop’s call for prayer for the nation. Churches are for prayer and, if the Christians cannot pray, what can they do?” Arora asked. 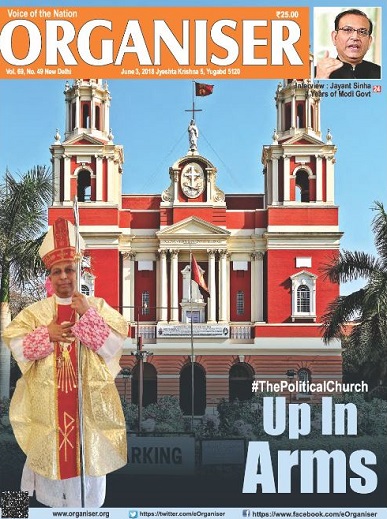 Indian media has been gripped by a vicious debate on the “patriotism” of Christians after Catholic archbishop Anil Couto of Delhi sent out a pastoral letter to his community to launch “prayer for the nation”. Not even half a per cent of New Delhi’s 20 million population are Catholics.

“We are witnessing a turbulent political atmosphere, which poses a threat to the democratic principles enshrined in our constitution and the secular fabric of our nation. It is our hallowed practice to pray for our country and its political leaders all the time, but all the more so when we approach the General Elections [in 2019],” wrote Archbishop Couto.

“Let us begin a prayer campaign for our country from 13 May, 2018,” said the letter, encouraging Christians to fast and pray every Friday by “foregoing at least one meal … and offering penance and sacrifices for our spiritual renewal and that of our nation”.

Some major media networks responded by accusing the archbishop, and Christians in general, of being “against Modi”.

Asserting that “minorities are safe in India”, Rajnath Singh, home minister of the country, cautioned on 21 May that “no-one should speak to mobilise the people of the country on the basis of religion”.

But journalist Teesta Setalvad said the media “have an agenda”. “The archbishop’s letter is discussed for hours in the media. What crime has he committed?” she asked.

“There is deprivation in the media. The archbishop is portrayed as anti-national,” added Rajdeep Sardesai, one of the pioneers of TV journalism in India.

“Space for dissent is shrinking”, Sardesai said, adding that many of those “waging such campaigns” were “taught in Christian schools by priests and nuns”.

“The silent majority has been silent for too long. We must speak out and often. Silent majority is not an option any more… You have to challenge them and debate them. We need new alliances,” he said.

Modi was the Gujarat Chief Minister during the 2002 anti-Muslim riots, when more than 1,000 people were killed. Harsh Mandar, who quit the elite Indian Administrative Service to protest at the BJP government’s alleged connivance in the 2002 attacks, pointed out that violence against religious minorities has since been “getting worse”.

“Your identity is a source of great fear – for the minorities,” said Mandar.

Anti-minority violence is “based on hatred”, said Ram Puniyani, columnist and social activist. After he visited Kandhamal, in Odisha state, scene of the worst case of anti-Christian violence in India’s history, he returned to the state capital, Bhubaneswar, where he said some Hindus told him “it is good that Christians have been taught a lesson”. “This is the politics of hatred,” he told the conference.

Shabnam Hashmi, co-ordinator of the Conclave of over 50 speakers from across the country, pleaded with delegates to take its message to the far corners of the nation: “The challenge before us is clear. We have to speak up and take the message to the masses.”

The conference discussion about Indian media coincided with a report by the BBC’s South Asia correspondent, Justin Rowlatt, noting that a sting operation by a news organisation called Cobrapost “claims to have revealed a deeply engrained bias towards the ruling Bharatiya Janata Party (BJP) within many of India’s leading media groups, as well as a willingness among some of the country’s most senior media executives and journalists to take money in return for pushing a political agenda”.

Cobrapost alleged that some of the country’s leading news organisations were willing to “not only cause communal disharmony among citizens, but also tilt the electoral outcome in favour of a particular party – and all in return for cash”, Rowlatt wrote. However, he warned that “undercover stings of this kind are notoriously unreliable. The footage can easily be taken out of context or edited to change the meaning of a conversation or misrepresent its real nature”.