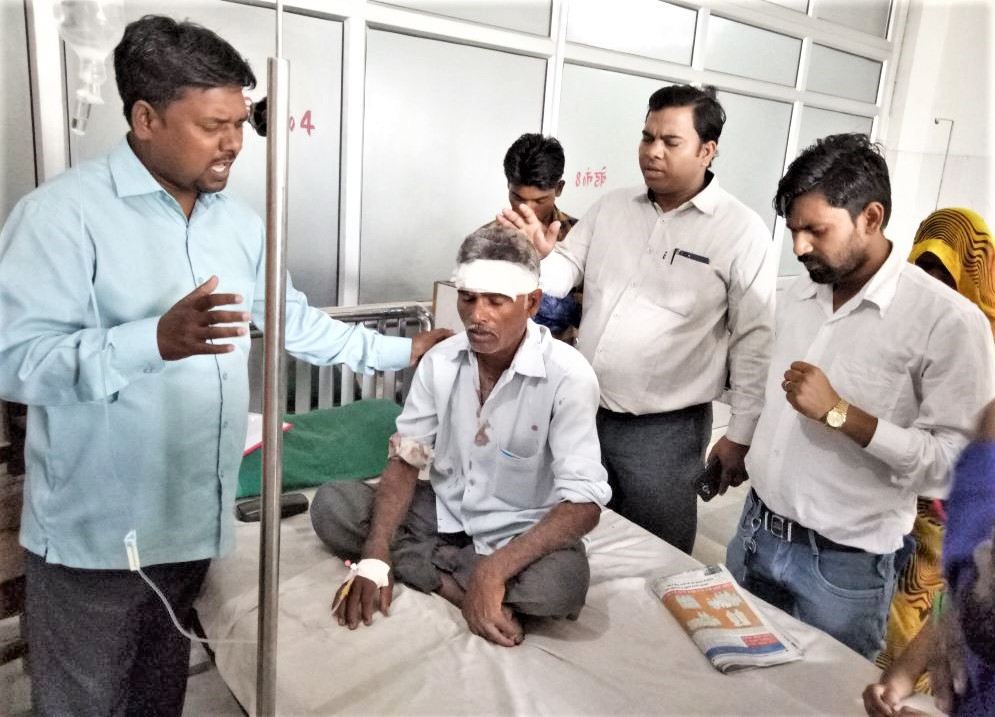 NEW DELHI, May 29, 2018 (Morning Star News) – In an attack on a church service in northern India that left a 55-year-old man unconscious, the wife of a pastor hid her husband after Hindu extremists said they would kill him, sources said.

Women and children were not spared in the attack by 25 masked extremists armed with wooden sticks last month on the Full Gospel Pentecostal Church in Baburia Khera, Uttar Pradesh state, after which police treated church members as criminals.

“They were looking for the pastor, saying, ‘We will kill him today,’” pastor Kamlesh Kumar’s wife, identified only as Shashikala, told Morning Star News. Her voice shaking, she said, “We had hidden him inside a room and locked the room from outside. They went on hunting for him everywhere. This is how we were able to save his life.”

Ram Prasad, 55, tried to stop the attackers from hitting congregation members in the April 29 assault, and the Hindu extremists seized him and beat him until he lost his consciousness, she said.

“I saw Ram Prasad fall on the floor bleeding profusely after being hit by a brick, but the attackers continued kicking him and hitting him with wooden sticks until he lay motionless on the floor,” Shashikala said.

The masked men forced their way into neighboring homes in search of Pastor Kumar, terrifying the resident women and girls.

“They manhandled women, beat them, pulled their clothes, spoke to them in a filthy language and disgraced them,” Pastor Kumar told Morning Star News.

The women and girls began to flee the chaos, Shashikala said.

“The neighbors just stood watching us in fear during the attack,” she said. “No one came to our rescue for fear of getting beaten up.”

The congregation had gathered for worship in Baburia Khera, 30 kilometers (19 miles) from Raebareli, when the Hindu extremists entered and, chanting “Jai Shri Ram (Hail lord Ram),” quickly attacked the congregation, beating men, women and small children, Pastor Kumar said. Besides using wooden sticks and bricks, they picked up chairs as weapons, he said.

There were 32 incidents of persecution of Christians in Uttar Pradesh state last year, according to the United Christian Forum advocacy group.

Police Disdain
A church member called police, but the officer who arrived chastised the Christians for being an active church.

“Instead of taking action against our plight,” Pastor Kumar said, “the police began to question us as to, ‘Why are you running a church? You are not supposed to worship here…otherwise you will get killed and we can do nothing to help you.’”

The officer told the Christians in a derogatory way to “flee from the church,” Shashikala said. Interrogating church members, he asked them if they had been forcibly converted to Christianity.

“The people told the police that none of them have been forced, but that they all come willingly,” Shashikala said. “They told the interrogating police personnel that they come here for prayers and get healed from their diseases and get peace of mind.”

Police have registered a First Information Report but no arrests have been made, church leaders said.

“We have been serving here for many years now. We had received threats even in October 2017 by the same people, but they had not attacked us then,” Pastor Kumar said.

The church was established in 2014, with about 55 people from neighboring villages regularly attending the Sunday worship service.