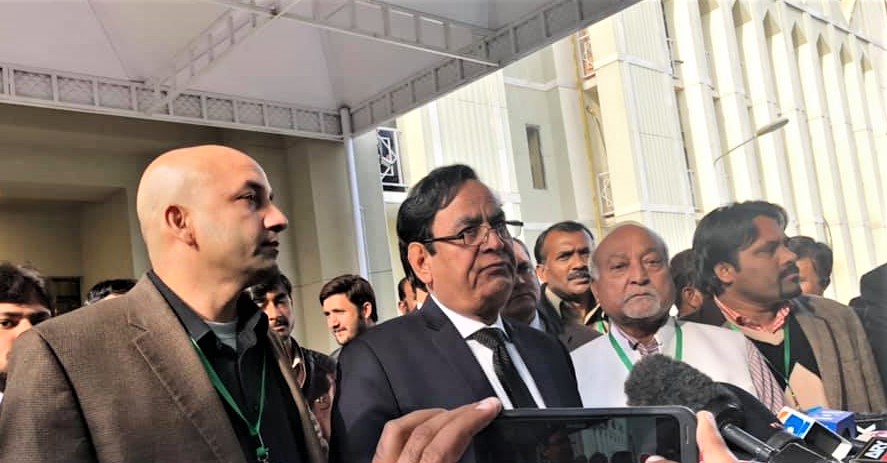 The mother of two children and stepmother to three others has been in protective custody since her release from prison on Nov. 7. She was acquitted on Oct. 31.

Her attorney, Saiful Malook, told Morning Star News that she and her husband, Ashiq Masih, will likely leave Pakistan for Canada “tonight or in the next couple of days.”

Informed sources said Noreen’s two daughters are already in Canada after they were granted asylum earlier this month. A paternal cousin of Masih, Joseph Nadeem, has been caring for them there.

Malook said it was in Noreen’s best interest to leave Pakistan in the face of danger from Islamist extremists.

“Bibi has already suffered enough for a crime that she did not commit,” he told Morning Star News. “It’s time that she starts her life afresh with her family in a land where their lives are not under any kind of threat.”

He called the Supreme Court’s rejection of the challenge against its decision to acquit the 53-year-old Noreen a victory for Pakistan’s constitution and rule of law.

Malook, who had fled to The Netherlands after Noreen’s acquittal last year in wake of security threats and returned to Pakistan on Sunday (Jan. 27) for the hearing, said the three-judge panel had “insisted on very strict proofs of blasphemy and found none.”

He added that the top court’s verdict should act as a deterrent against the filing of fake cases involving a subject as sensitive as blasphemy.

“The Supreme Court judges have given very clear observations on punishment for perjury,” he said. “Although there’s already a law against recording concocted testimonies, it’s important that the state implement it in letter and spirit to discourage people from leveling false allegations against others.”

‘Bibi Will Not Escape Death’
The Islamist extremist Tehreek-e-Labbaik Pakistan (TLP), which led violent protests demanding Noreen’s execution after her acquittal last year, called for its members to be ready for action in a press statement.

Although most of its top leaders, including firebrand clerics Khadim Hussain Rizvi and Pir Afzal Qadri, remain in detention after a government crackdown, some TLP members who did show up for the hearing in Islamabad on Tuesday (Jan. 29) reiterated their call for violence against Noreen.

“Bibi will not be able to escape death, as there are Muslims everywhere who want to kill her,” Hafiz Ehtisham Ahmed, a radical preacher affiliated with the ultra-extremist Lal Masjid (Red Mosque) in Islamabad, told reporters outside the Supreme Court building after the ruling. “If she goes abroad, don’t Muslims live there? If she goes out of Pakistan ... anybody can kill her there.”

The review petition argued that the Supreme Court verdict did not meet standards of jurisprudence, Islamic provisions and the “normal principle of justice with reference to application in blasphemy laws.”

During the hearing, newly-appointed Chief Justice Asif Saeed Khosa dismissed the review petition filed by Qari Muhammad Salaam, who was also the complainant in the case.

Salaam’s counsel, Ghulam Ikram, demanded that a larger bench be made for the review petition, saying it should include Islamic scholars and top clerics. To this Chief Justice Khosa asked, “How is this a matter of religion?”

He inquired if the verdict was not given on merit, asking the petitioner to pinpoint mistakes in the earlier verdict.

“The verdict was given on the basis of testimony,” he said. “Does Islam say that one should be punished even if they are found not guilty?”

The petitioner’s lawyer argued that the verdict did not consider testimonies of some of the witnesses and said that “if [a] testimony isn’t further examined [by the lawyers], it is understood to be true.”

The chief justice responded that if testimonies of those involved in the case were not judged correctly the court would review them, but “first talk about the merit and tell us where the flaw is; tell us where the testimony was read incorrectly [by the court]. What Islam says about it will be discussed later.”

Islam says that a testimony should be true even if it incriminates a person’s own loved ones, the chief justice added.

“An FIR [First Information Report] lodged five days after an incident is suspect,” he added, referring to the report that formed the basis for the prosecution.

He also noted that testimonies differed in their account of the size of the crowd that gathered following the blasphemy allegation, and their location.

The lawyer countered that late registration of the FIR does not necessarily mean ill intention.

“Should we then hand an accused punishment on the basis of such testimonies?” questioned the chief justice. “You are saying that Aasiya said this [alleged blasphemous words] while addressing 25 people. Was she addressing a public rally? In front of the investigative officer, the women said that no dispute had occurred between them. This case did not have as many honest witnesses as it should have had.”

Reiterating what Chief Justice Khosa had asked multiple times during the hearing, Justice Isa asked the petitioner’s lawyer, “Tell us what the flaw in the verdict is.”

The chief justice added, “We will not hear the case again. We are hearing [the petition] for the satisfaction of those who gave religious edicts [on the verdict] without reading it.”

The chief justice noted that under the law, false witnesses in such cases should be sentenced to life imprisonment after a summary trial. After asking the complainant counsel to assist in deciding what should be the punishment for those witnesses who made false statements, Chief Justice Khosa announced, “The review petition is dismissed on merit.”

Blasphemy Law
Noreen was sentenced to death in 2010 in what swiftly became Pakistan’s most infamous blasphemy case.

Blasphemy remains a massively inflammatory issue in Pakistan, where even unproven accusations of insulting Islam can spark lynching.

The allegations against Noreen date back to 2009, when Muslim women accused her of blasphemy against the Muhammad, prophet of Islam, a charge punishable by death under Pakistan law.

Noreen was harvesting berries with a group of Muslim women when a row broke out over a bowl of water. The Muslim women said that because she had used the bowl, they could no longer touch it, because her faith had made it unclean.

Accusers said she confessed to blasphemy while being beaten, and police arrested her. The ensuing case elicited support from international rights groups, politicians and religious figures.

In January 2011, former Punjab Gov. Salmaan Taseer, who spoke out in support of Noreen, was gunned down in broad daylight in Islamabad. His assassin, Mumtaz Qadri, was executed in 2016 after the court found him guilty of murder. He was hanged in February 2016. The TLP was founded by extremists who believe Qadri’s hanging was unjustified.

Only two months after Taseer’s killing, the only Christian minister in the federal cabinet, Shahbaz Bhatti, was also gunned down by members of Tehreek-e-Taliban for supporting Noreen and for advocating that Pakistan’s blasphemy laws be amended.

Pakistan ranked fifth on Christian support organization Open Doors 2019 World Watch list of the 50 countries where it is most difficult to be a Christian, and on Nov. 28 the United States added Pakistan to its blacklist of countries that violate religious freedom.