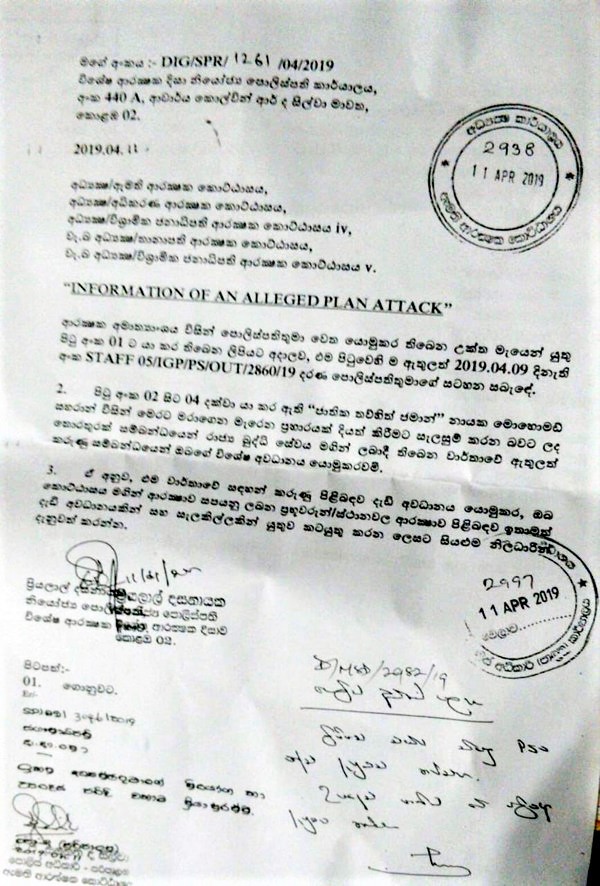 HYDERABAD, India, (Morning Star News) – Christians in Sri Lanka have never seen such a large-scale attack on them as the one that hit three churches and three hotels on Easter Sunday (April 21), killing at least 290 people, they said.

“I don’t have words to express my pain,” a teary-eyed Eranda Weththasinghe told Morning Star News from Negombo, a predominantly Christian area north of Colombo where 104 worshippers died in a suicide bomb blast at St. Sebastian’s Church. “Tomorrow is going to be the mass funeral service, we only want prayers. We lost so many people.”

Weththasinghe said he lost several friends in the explosion that he witnessed, which the Sri Lankan government blamed on a local Islamic extremist group, the National Thowheed Jamaath. Officials said the small, obscure group could not have carried out the coordinated attacks without international accomplices.

“The smell of flesh is all around me,” Weththasinghe said. “We are a peace-loving community in this small city, we had never hurt anyone, but we don’t know from where this amount of hate is coming. This city has become a grave with blood and bodies lying around.”

Weththasinghe, who helped with rescue efforts after the blast, said some of his friends are still missing.

“Since the past three years, we don’t know why, but we see an extremist’s mindset developing among the Muslims,” he told Morning Star News. “I know many good Muslims, but there are also a lot who hate us, and they have never been so before. It is in these three years that we see a difference.”

While Christians in Sri Lanka have suffered at the hands of radical Buddhists and, increasingly, hard-line Hindus, attacks by Muslim extremists have been rare. Muslims account for 9.7 percent of Sri Lanka’s population of about 22 million, which is 70 Buddhist, 12.6 percent Hindu and 7.6 percent Christian, according to the country’s 2012 census.

Shyami Sirivardene, also a resident of Negombo, told Morning Star News that Negombo and parts of Colombo where the blasts took place are predominantly Christian areas.

“Negombo is fondly called the ‘little Rome,’ with shrines and ancient churches,” Sirivardene said. “We can’t say who is behind the attacks, but the locals suspect it to be the plot of Islamic extremists. The attacks have been planned to affect the Christian community; since the churches in these areas date back to 19th century, people flock in huge numbers to attend the Mass on Easter and Christmas.”

Residents in neighboring areas close to the church buildings join the previous Saturday Easter vigil service, and Christians come from distant areas to attend the Easter morning service, she said.

“They have been targeted,” she said. “Colombo to Negombo and surrounding towns and suburbs is hardly a half an hour drive using the highway, and most Christians prefer to travel by bus or drive on their own using another route, which takes about an hour or more depending on traffic. People are very furious and scared. The busy toll road from Colombo to Negombo connecting the airport somewhere in the midst is empty today.”

A government spokesman told media that police found 87 bomb detonators at the main bus station in Colombo, the capital.

Sirivardene added that the luxury restaurants targeted at the three bombed hotels serve special Easter buffets that attract foreigners, including those from the United States and Europe.

Besides St. Sebastian’s in Negombo, also attacked by suicide bombers were St. Anthony’s Shrine (a large Catholic church in the Kochchikade area of Colombo), and Zion Church in Batticaloa, in the eastern part of the country. Suicide bombers also detonated explosives in Colombo at the Shangri-La Hotel, the ground-floor Taprobane restaurant at the Cinnamon Grand Hotel and at the Kingsbury Hotel.

Biraj Patnaik, South Asia director for human rights group Amnesty International, told The Washington Post that the scale of the attacks were “shocking and unprecedented.” They were the worst in Colombo since 1996, when rebel Liberation Tigers of Tamil Eelam detonated explosives at Sri Lanka’s central bank that killed nearly 100 people.

Sri Lankan police attempted to defuse another explosive substance found in a vehicle parked near St. Anthony’s Shrine, which was exploded without causing damage. Suspicious objects such as bags and boxes discovered in Kotahena and Pettah caused two more explosions.

“We have been asked to stay indoors, and tomorrow [April 23] would be the national mourning day,” said Sirivardene of Negombo. “There would be a mass funeral service for all the bodies collected so far.”

He reportedly called on Police Inspector General Pujith Jayasundara to resign, as security agencies had received a report warning of attacks by the group against churches and hotels 10 days before.

A police memo reportedly issued in Sinhalese 10 days before the attack, entitled, “INFORMATION OF AN ALLEGED PLAN ATTACK” and stamped on April 11, said foreign intelligence officials suspected imminent attacks by the National Thowheeth Jamaath against non-Muslims. It instructed all police to be extra vigilant and cautious in monitoring locations under their jurisdiction. It is signed by Deputy Inspector General Priyalal Dissanayake.

Sri Lankan Prime Minister Ranil Wikremesinghe told media he did not know about the letter, saying, “Neither I nor any ministers were kept informed.”

President Maithripala Sirisena controls Sri Lanka’s security agencies, but since he tried to oust Wickremesinghe in an Oct. 26 coup, the prime minister has not been invited to security council meetings, a parliamentarian told The Washington Post.

Police have reportedly arrested 21 people in connection with the bombings. Three police officers were reportedly killed in a raid on a house where suspects were hiding.

In his Easter address, Pope Francis called the bombings “horrendous.” In his Easter Monday sermon today, he appealed for help for the people of Sri Lanka.

“I hope that everyone condemns these terrorist acts, inhuman acts, never justifiable,” he said.

Yousef A. al-Othaimeen, head of the Organization of Islamic Cooperation, which represents 57 predominantly Muslim nations, “strongly condemned” the “cowardly attacks [on] innocent worshipers and civilians.”

Bishops Dhiloraj Canagasabey and Keerthisiri Fernando of Colombo, along with the Kurunagala Church of Ceylon, issued a joint statement condemning Sunday’s attacks.

“We call on the government to institute quick action to investigate thoroughly these incidents and to bring the perpetrators to justice, to ensure the safety of places of religious worship and to prevent any individuals or group taking the law into their hands or provoking acts of intimidation or violence against any community or group,” their statement said. “We ask for the continued support of all security and emergency services in ensuring public peace and in providing care for the affected; the motives of those twisted and warped minds who planned and executed such appalling acts could very well be to destabilize the country and to cause damage to the unity and harmony of our nation.”

Sri Lanka ranked 46th on Christian support organization Open Doors’ 2019 World Watch Listing of the 50 countries where it is most difficult to be a Christian, from its previous rank of 44th.