Four Christians, including U.S. Woman, Arrested from Hotel in Nepal

By Our South Asia Correspondent 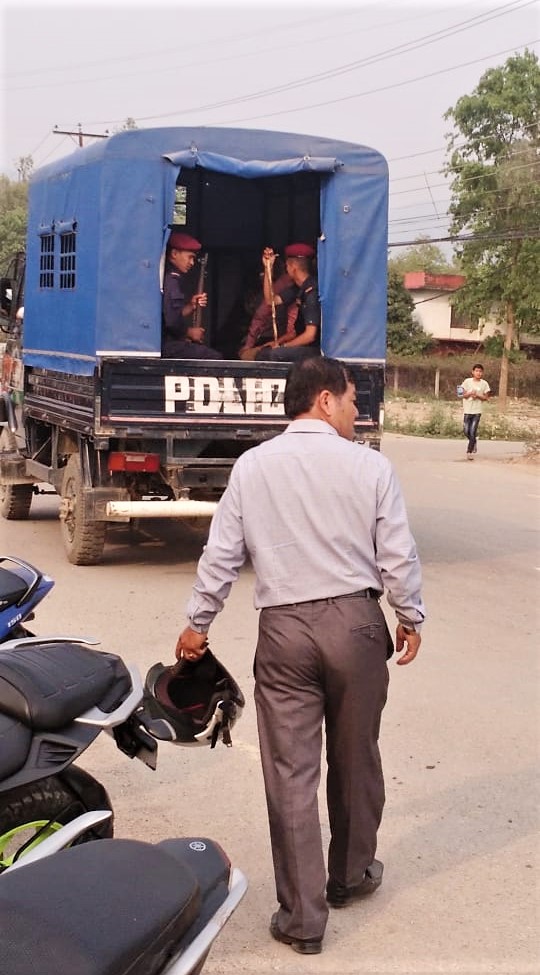 Police from Dang Deukhuri District Police Headquarters in Ghorahi charged into the Hotel Doko in Ghorahi at 7 a.m. and detained Pastor Dilli Ram Poudel, 49, general secretary of the Nepal Christian Society; Gaurav Shrivastava, 34, a citizen of India; Kunsang Tamang, a Nepali woman from Sankhuwasabha District; and Oleana Cinquanta, a 49-year-old U.S. citizen from Colorado. Ghorari is 421 kilometers (261 miles) west of the capital, Kathmandu.

Cinquanta was held for more than 10 hours without her medication before being deported to the United States, she said.

“The allegations are completely false,” Cinquanta texted Morning Star News while escorted by plainclothes police by bus to a flight back to the United States. “We were not distributing any Bibles or dollars.”

Having arrived on Sunday (April 21), Cinquanta said she was visiting a church program. Shrivastava had come to the hotel from India as a guest speaker for a Christian conference scheduled yesterday and today (April 23-24), organized by Bista. 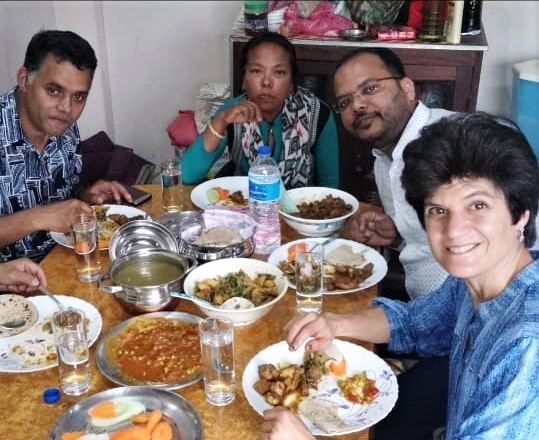 Bista was a member of a delegation of five Christian leaders who visited the district police headquarters at about 4 p.m. on Tuesday (April 23) and met with Superintendent of Police Bel Bahadur Pandey, who led the officers making the arrests, citing reasons of “general inquiry.”

Pandey told the delegation that the Christians would be released by today (April 24), Bista told Morning Star News.

Media outlets in Nepal reported the Christians were detained for alleged involvement in preaching Christianity and for conversions through allurement in Ghorahi. The outlets alleged they were distributing Bibles and money.

“I was visiting a church program in Dang with my travel agent and some friends,” Cinquanta told Morning Star News. “No one was engaging in conversion.”

It should be expected that as a Christian she would be interested in seeing how Christians in other areas worship, she said.

“If I were a Hindu, I would be interested to go to visit temples, and no one would have complained,” Cinquanta said. “But because I go and participate in a Christian program, I’m accused of trying to convert people to a religion. And I’m accused entirely on the basis of my travel agent also being a pastor and not based on what I personally was doing. This is a serious human rights violation.”

Cinquanta’s flight from Kathmandu was scheduled to leave this evening (April 24). Pastor Poudel had to fly to Kathmandu Tuesday morning (April 23), while Shrivastava had to return to India by bus by 2 p.m. Wednesday, though they were still under police remand, according to Bista.

Christian leaders in Nepal expressed their shock at the detentions and deportation.

“When detained, these Christians were not preaching or roaming on the streets or even distributing anything,” Pastor Sagar Baizu, spokesperson of the Federation of National Christians in Nepal (FNCN), told Morning Star News. “They were detained from their hotel rooms in early morning hours. It is shocking that they are kept in the police custody since 7:30 in the morning and not being released.”

Bista expressed his displeasure at discrimination against a minority faith.

“I am really disappointed, this is pure harassment,” he said. “They are portraying us [Christians] as ‘bad.’”

Christian leaders noted that the superintendent of police who led the detentions, Pandey, was also behind the arrests of seven men and one woman in Charikot, Dolakha District on false charges in June 2016. Charged with trying to convert children to Christianity after the Christians were found distributing pamphlets about Christ in a Christian school, the eight Christians were acquitted on Dec. 6, 2016. Pandey was then deputy superintendent of police at the district police office of Dolakha.

Morning Star News spoke to an officer at police district headquarters in Dang who confirmed that three Christians were in custody but refused to give further details. He handed the phone to a more senior officer, who denied any knowledge of the detentions and hung up.

Around 500 Christian leaders scheduled a peace rally in protest against the detentions today and will hold a press conference.

Cinquanta said that while at the police station from 7:30 a.m. to 6 p.m., she was given almost no opportunity to speak.

“Almost all their conversation with my friends was in Nepali, which I don’t understand,” she said. “Only once near the beginning of the interrogations an officer harshly accused me (falsely) but didn’t offer me a chance to reply.

“I am appalled. I had thought Nepal was more friendly to tourists, but this shows us at least Dang area law enforcement would rather err on the side of attacking minorities and discriminate rather than take time to understand a person’s real intentions.”

Cinquanta told Morning Star News in a text that police did not allow her to get her hypothyroid medication before arresting her, and that it was not included in her luggage that police brought to the police station.

“These meds are very specialized, and I will now have to go several days without them until I get to the U.S., where I can have a new prescription called in,” she wrote while being taken by bus to Kathmandu, a trip of 15 hours that she endured in spite of lower back pain and Restless Leg Syndrome that normally keeps her from traveling more than five hours.

“Then I have to get on the airplane to the U.S.,” she said. “In total I will have gone around 65 hours without sleep.”

Cinquanta said she was preparing to open a guest house in Nepal, and eventually a coffee/snack shop and a travel agency, as she has many friends around the world who want to visit.

“I sincerely hope this issue gets resolved so I and many more of my friends can come and bless and enjoy this beautiful country,” she said. “The thought of not being able to return makes me unbearably sad to the point of tears. I have made precious friends here who are like my own family. To not be able to see them will break my heart.”

Nepal was ranked 32nd on Christian support organization Open Doors’ 2019 World Watch List of the countries where it is most difficult to be a Christian.