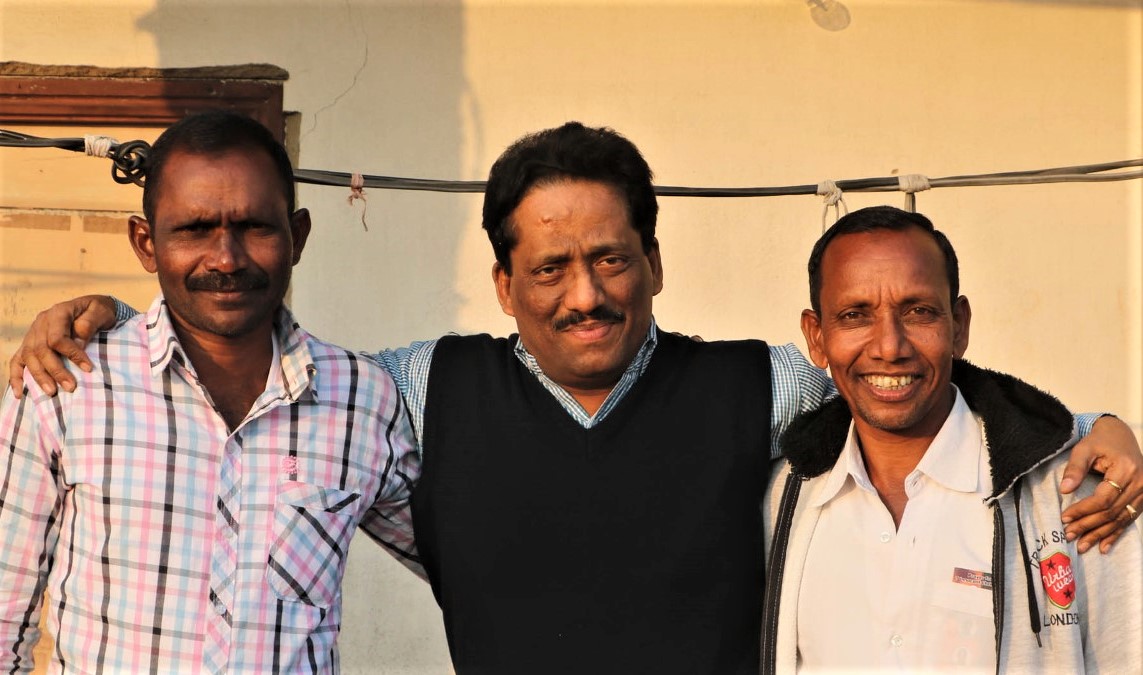 NEW DELHI, (Morning Star News) – When Bijaya Kumar Sanaseth went to jail for a murder in India that he did not commit more than 10 and a half years ago, his mother was still alive and his oldest child was 9 years old.

“I have not seen my children grow,” Sanaseth, the second Christian to be released on bail of the seven wrongly convicted of killing a Hindu extremist leader, told Morning Star News between sobs.  “My six children were very young, with my youngest child, a girl, being 1-year-old, and my oldest, a boy, was 9 years old. Today the youngest is 12 and my oldest is 20. Nobody can give me back the years that I have lost.”

Sanaseth and the six other Christians were convicted in September 2013 of the murder of Swami Laxmanananda Saraswati, whose death on Aug. 23, 2008 touched off anti-Christian attacks that killed 120 people, destroyed nearly 6,000 homes and displaced 55,000 Christians. Now 47, Sanaseth was released on bail on July 27, two months and six days after fellow convict Gornath Chalanseth was bailed out on May 21.

“I faced a lot of hardships in jail – I thank God for this freedom,” Sanaseth said. “I trusted God would bring me out one day.”

Because the Supreme Court issued the release on bail, he does not have to return unless the high court itself so orders.

After 30 to 40 assailants with automatic weapons and locally-made revolvers attacked Saraswati at his ashram in Jalespeta, Tumudibandha, in Orissa (now Odisha) state’s Kandhamal District, Sanaseth became a suspect after helping protecting Christian institutions from the resulting backlash, he said.

A convent school near his home was under attack, and Catholic leaders called him to ask if he could intervene because of his good standing in the area, Sanaseth told Morning Star News.

“I stood at the gate of the convent even as the mob approached,” he said in Oriya through a translator. “They stopped when they saw me because they all knew me. Taking advantage of that, the [convent] father made the children go home safely while I called the police. By God’s help, I was able to save many people, and the violence in our area was considerably less because of the intervention. Many Christians were saved, houses, hostels as well as church buildings. I was also part of the peace committee that restored order after the violence.”

Because he was able to save so many, Hindu extremists later retaliated by listing his name among the suspected murderers, he said.

“I paid a huge cost for that,” Sanaseth told Morning Star News. “My mother died after I went to jail. The family could not take care of her, as there was no money with me being in jail.”

Sanaseth lived in Maduguda, many miles from the place where Saraswati was slain.

“The swami was murdered in a different block altogether – it is nowhere near to where I live, and I was in my hometown on the day of murder, with several people witnessing my presence,” Sanaseth said.

Malati Pradhan and Kumudhini Pradhan, two girls about 11 and 14 years old at the time, went on record saying they saw Sanaseth and one of the other seven Christians arrested, Durjo Sunamajhi, outside Saraswati’s room at the time of the murder. A judge accepted their testimony, he said.

“People from Swami Laxmanananda Saraswati’s ashram who were produced in the court said that they do not know us or have never seen us near the ashram,” Sanaseth said. “After all the witnesses were over, Malati Pradhan was brought in. Even the ashram people said that Malati was not from their ashram. She was a fake witness who lived 80 kilometers (45 miles) away from the ashram.”

The judge told the public prosecutor that if Malati Pradhan were to be tried as a false witness, she would be behind bars, he added.

Sanaseth told Morning Star News that initially, the judge asked the public prosecutor why the Christians were arrested, remarking that they had nothing to do with the murder.

“It was evident from the judge’s statements that he found us not guilty, but the public prosecutor said that violence will start once again if he did not put us in prison and punish us,” Sanaseth said. “A meeting allegedly took place between three ministers of the Legislative Assembly and the judge, where they said that, ‘If you release these people who have been arrested, the public will demand the real culprits. To bring peace to this place, these arrested should be put behind bars.’”

When the trial seemed to be going in the Christians’ favor, the judge was transferred and a new judge took over, he said.

“He did not even give us an opportunity to defend ourselves,” Sanaseth said. “We were not allowed to speak.”

Even members of the Hindu extremist Rashtriya Swayamsevak Sangh (RSS) and the Bharatiya Janata Party issued demands throughout Kandhamal District for the arrest of the real culprits in rallies until 2017, he said.

“Though the truth was evident, we were convicted and spent several years in jail, and the other five continue to be in jail,” Sanaseth said.

On the evening of July 27, Sanaseth’s family welcomed him as he came out of prison, after the Supreme Court of India granted him bail on an application moved by the Archdiocese of Cuttack-Bhubaneswar and the Human Rights Law Network.

Previously Sanaseth worked as a farmer, as well as a contractor who helped build roads and buildings. With a seventh-grade education when he was incarcerated, he was able to study enough in prison that he completed the 10th grade, he said.

“But the biggest gain was in my faith,” Sanaseth said. “I was a nominal Christian, knowing about Jesus but did not know Him. In the jail, I got to know the Lord closely. I read the complete Bible five times and started to understand the importance of the Word of God.”

In the four jails in which he was incarcerated, he spoke about Christ enough that eight people put their faith in Him as Lord and Savior, he said.

“I had the privilege of leading church in prison as well and thank God for it,” he said. “I appeal to readers of my story through Morning Star News to pray for the five innocents in prison, that they too would acquire bail and be reunited with their families.”

Justice for All
Journalist Anto Akkara, who has worked as an activist for the release of the accused, said Sanaseth walked to freedom from Phulbani jail after spending 10 years and seven months behind bars for a crime he never committed.

Akkara has been involved in keeping the issue of justice for the “innocent seven” alive in the public realm through his books and online petition campaign www.release7innocents.com.

“Prayer works,” Akkara said. “When Gornath Chalanseth came out of jail on May 21, the first thing he said after embracing me was that I should meet Bijaya inside the jail. Since that day, his cousin had been in constant touch with me.”

Sanaseth had written Akkara a letter from inside prison expressing his anxiousness about a family member’s health. He had appealed to Akkara to speed up the bail process after Chalanseth’s release.

“The Lord has listened to Bijaya’s cry,” Akkara told Morning Star News. “Remember, bail pleas of the others had been ‘adjourned’ by the Supreme Court in between ordering bail to Gornath and Bijaya.”

Sanaseth said he was deeply concerned about the other five who remain incarcerated.

“In the third week of August, I went and met three of them inside the jail, and today [Aug. 20] I met the fourth, Sanatan Badamajhi,” he said. “All of them are very sad and have pleaded for prayers and asked me to tell those who are helping to speed-up the process of their bails. It has been so many years they have been in jail, and like me they long to be with their families.”

Sanaseth previously obtained temporary bail in December 2017, along with Chalanseth, for two weeks. They had returned to jail on Jan. 6, 2018.

Considering the plea by Senior Advocate Colin Gonsalves, who appeared on behalf of the Archdiocese of Cuttack Bhubaneswar and the Human Rights Law Network, Justice A.M. Khanwilkar and Justice Dinesh Maheshwari granted the bail for Sanaseth with this statement:

“Considering the fact that the accused-appellant (Bijaya Kumar Sanaseth S/o Salei Sanaseth) had already undergone 10 years of his sentence and taking an over-all view of the matter, we are of the opinion that the above-named accused-appellant should be released on bail on such conditions as may be imposed by the learned Additional Sessions Judge, Phulbani in S.T. No. 16/18 of 2013-2009. The order dated 04.12.2018 passed by the High Court is set aside and the appeals are accordingly allowed.”

The Supreme Court had earlier given the same reason for granting bail for Chalanseth. Chalanseth won bail based on the time he had spent in jail and the nature of the evidence against him, “which was slim, shifty and weak,” attorney Rebecca Mammen John then told Morning Star News.

Working pro bono especially on important civil liberties cases and on behalf of victims of sexual violence, John appeared along with lawyers from Alliance Defending Freedom (ADF) to help procure bail for Chalanseth.

Attorney Anupradha Singh of the Human Rights Law Network told Morning Star News, on behalf of Senior Advocate Colin Gonsalves, that they took over the cases of five of the convicted, excepting Chalanseth, in January 2019 and filed an application in the Supreme Court in March.

Singh, who is working along with Senior Advocate Gonsalves on the Kandhamal anti-Christian violence cases, said that the petitions of the other four are pending in the Supreme Court.

“The petition of the four others ‘adjourned’ will be heard in September,” she said.

The Rev. Dibakar Parichha, a Catholic priest at the diocese of Cuttack and an attorney at the Cuttack High Court, is assisting in the effort to obtain justice for the seven. He has been in continual contact with the two released Christians, encouraging and guiding them.

“I am happy that God has heard the cry of the needy,” Parichha told Morning Star News. “The innocent have been freed after 10 years.”