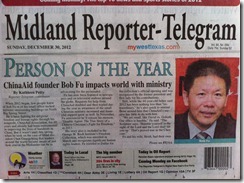 When 2012 began, few people knew of Bob Fu or of his small office tucked between unassuming buildings on North Big Spring Street.

He'd been fighting for religious freedom and human rights through his nonprofit, ChinaAid Association, for 10 years and already had been instrumental in improving the lives of hundreds in China. But it wasn't until this spring, when he took on the case of blind dissident Chen Guangcheng that leaders around the world became aware of just how crucial the Midlander can be in advocating for the persecuted.

Fu has now been featured in newspapers and on television stations around the globe. Requests for help from ChinaAid doubled and then tripled during the year as awareness of the small Christian ministry increased and financial support grew as well. In November, Fu announced he'll release his memoir, "Double Agent: The True Story of a Chinese Christian's Fight for Freedom," in 2013.

His story also is included in the George W. Bush Institute's Freedom Collection, which was unveiled in March and recognizes significant human rights leaders. Fu traveled to Dallas for the collection's official opening and was recognized by the former president and first lady for his contributions.

Still, while the 44-year-old father said 2012 has been nothing less than "extraordinary," he's also quick to remind those around him that ChinaAid's success has little to do with him.

"We are the small, like David vs. Goliath. Our office is humble," Fu said. "The Scripture says, 'Humble yourself in the sight of the Lord and the Lord shall lift you up.' That's proved true in the Chen case."

Fu and his wife, Heidi, had their own tale of escape from persecution in China before starting up their ministry. After being arrested for leadership in an underground Christian house church in the mid-1990s, the couple fled China and were admitted to the U.S. They first settled in Pennsylvania, where Bob Fu studied theology and was planning for a future as a teacher.

When he was alerted to the case of five Christian house pastors who'd been sentenced to death, Fu said God changed his plans.

He and Heidi set out to help and started in their garage what is now ChinaAid. After a chance meeting on Capitol Hill with leaders from Mid-Cities Community Church a few years later, the couple decided to move their family and nonprofit to the Tall City.

"I was very much preparing myself to become a theologian," Fu said. "I guess it's like the Scripture says, 'His thought is higher than our thought, his ways are higher than our ways."

When Chen escaped from house arrest in China this May, Fu knew what had happened before Chinese officials ever discovered Chen was missing. Chen had been under lockdown for speaking out against the country's one-child policy that he and others have said leads to forced abortions.

Chen eventually would be allowed to bring his family to the U.S. where he is studying at a New York university. The deal that paved the way for such a move, though, took time and lots of brokering between China and the U.S.

During those talks, Fu was pivotal in providing information and in speaking out for Chen. During one congressional hearing, Fu got Chen on the phone so the lawyer could testify on his own behalf.

The case was dramatic, Fu said, which is part of the reason it garnered so much attention worldwide.

However, while Chen is part of the reason 2012 was a banner year for ChinaAid, his case is not unlike the hundreds of others they come across each year, Fu said.

"In China there are really thousands of Chen Guangchengs. Almost every year there are a number of cases (like his). It's just that it doesn't reach that kind of high stakes," he said.

In the most extreme cases, like Chen's, Fu utilizes an underground railroad of sorts that he and others have built up in China to orchestrate an escape.

In 2012, ChinaAid also became more involved in the family planning debate and worked for the rights of the unborn. In one case, Fu used his contacts in China to speak with a government official and stop the planned forced abortion of a then 7-month-old fetus.

For Fu, the victory of helping parents save their child was one of the best parts of the year, he said.

As they look ahead, Fu said ChinaAid is working to become more vigilant. If recent trends are any indication, persecution -- and in turn the need for help -- will only grow in 2013.

"We anticipate that there will be increasing persecution," Fu said. "In the past couple of weeks there were more new arrests and more persecution. We just really can't keep up, and our staff is drafting press releases and literally working day and night."

By increasing awareness around the globe of the torture and persecution being endured by so many in China, Fu said he's hopeful more individuals will be willing to help push for change that he thinks is on the horizon for China.

"We think that things are changing," he said. "Sooner or later, China will have major change."