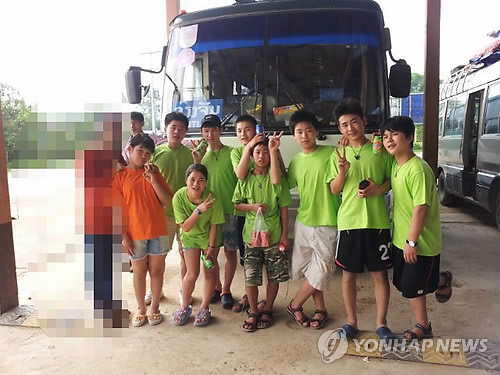 These nine North Korean young people were repatriated to North Korea against their will on May 28, 2013. Each one had escaped starvation in North Korea and found a safe home with a  missionary couple in China where they were loved and cared for. For  several years, they had to stay inside to avoid the Chinese Public Security Bureau and North Korean agents searching for North Korean refugees in China. In May of 2013, this couple , who have risked their own safety to care for these young people, were able to get them out of China and into Laos, where they expected to go to freedom in South Korea.  South Korean diplomats were in contact with the Laotians and were told the young people would be turned over to them.

In the past, Laos authorities have allowed North Korean refugees to resettle to South Korea and even the United States. Free North Korea Radio, a defectors run radio station based in Seoul, has reported that there was a direct order from Kim Jong Un to force the escapees back to North Korea.  There is a report they were being quarantined and are undergoing a special training by North Korean authorities.

North Korean Freedom Coalition (NKFC) holds Laos and China responsible for the fate of these children.   NKFC wrote to President Lt. Gen. Choummali Saignason, ‘Because the lives of the nine young people rests in your hands because of the decision that was made, we make this simple request: that the Laos People’s Democratic Republic perform regular visits to these nine children in North Korea, so that you can guarantee they have been welcomed on their return, treated properly, and their rights have been protected and that you share that information with the Republic of Korea who had requested to care for these nine young people.’

The NKFC further requested Laos ‘never again put the lives of North Korean men, women and children at risk by forcing them back to North Korea and that you instead return to your previous policy to work on their resettlement to the Republic of Korea, where they have automatic citizenship under the Republic of Korea’s constitution.’

A report from JK, who visited these children and others in the care of the missionary MJ and his wife:

It was early January of 2012 when I visited for the second time. Every child who was recently repatriated to NK from Laos, except Young-Won Baek, was all present at the shelter. After my second visit, the three youths among the children I met on my first visit left China in late July of 2012, went through Laos and were caught by the police in Thailand on August 8th, 2012, and spent time in the immigration office prison, and came to California in February of 2013.

All children were very cautious about their safety to not be caught by the Police in China. They seemed to enjoy having visitors. These children played games and watched movies together, spent time laughing and fighting like real siblings do.  These children all were wandering in the past because they were hungry and had no to place to stay, and they left NK to survive and to find food.

These young people all know Jesus Christ as their Savior. We are asking for anyone interested to adopt one of them for fervent prayer.  Will you pray for them? Your prayers will make a difference!

It appears at the present time these children are being used as propaganda tools for North Korea—we must pray that the Holy Spirit will cover their hearts and minds, as well as physical bodies, against all abuse the evil one will throw against them.

Thoughts on this from Suzanne Scholte (www.defenseforumfoundation.org) … “It is good to know that the DPRK is using them for propaganda purposes – this is the best outcome as far as I can see in this horrible outcome because our great fear is they would disappear into North Korea like so many hundreds, thousands before them that were forced back and we never knew what happened to them.  At least this international attention on these 9 is forcing the regime to keep them safe so it can prove that everything is wonderful in their homeland" by using them for propaganda purposes – .”

Please click here to adopt a child or children to fervently pray for —what an encouragement for the couple who risked all for these kids … and, hopefully, one day for these kids to know you have prayed!

JK’s memories of the children who were recently repatriated to NK from Laos:

MOON Cheol – 23 years old, Even though he is the oldest of all the children, he looks very young for his age due to living on the streets for most of his young life. When MJ brought him in for care, one of his toes was missing because it had to be cut off due to se-vere frostbite. He wanted very much to live a normal life and worked hard to adjust to life “off the streets.”

JUNG Gwang-Young - 20 years old, he is a very bright young man. He likes to be stylish and you can tell he has a wonderful smile.

BAEK Young-Won – 20 years old, he was the newest child to come into the shelter.  But MJ reported even though he was new to their routine, he got along well with all the other children.

RYU Gwang-Hyuk - 19 years old, he is very quiet and likes to stay in the background.

PARK Gwang-Hyuk – 18 years old, he is the child who has stayed with MJ the longest. He has freckles.   He always had lots of questions, and a great passion to learn, and was a “model student.”

LEE Gwang-Hyuk,– 18 years old,  He is a good student who worked hard to learn and answered questions well during class.  Like a brother sibling, he would get in small arguments with the girls.

RYU Cheol-Ryong – 16 years old, he is very small for his age as you can see in this photo.  He was easygoing and quiet.

CHANG Guk-Hwa – 16 years old, like all of these children she was in very poor condition when MJ began to shelter her.  Her hands were severely chapped from her life as a ‘Kotjebi.’ Her life under MJ and his wife’s care transformed her so that she looked so much better that she is hardly recognizable from when she first came to the shelter.

NOH Ae-ji—15 years old, she is friendly and followed instructions well.  She is the youngest, but she is very outgoing and was never afraid to express her opinion.

Updates, as we may be able to get them, will be listed here under Links for News of the Nine, and also sent through our Crisis Prayer Team Release (CPT) .

Links for News of the Nine

May the LORD bless you!