LAHORE, Pakistan (Morning Star News) – A high court in Sindh Province, Pakistan on Monday (Nov. 9) invalidated the marriage of a 13-year-old Catholic girl to a Muslim alleged to have abducted and forcibly married her, sources said. 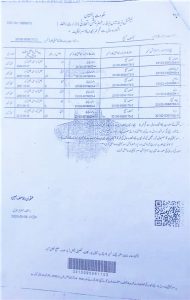 The court has yet to address the alleged forcible conversion of Arzoo Raja to Islam.

Justices ruled that as an underage girl Arzoo could not legally marry Ali Azhar, 44, and thus could not return to him. Instead of returning custody to her parents, however, the justices stated that when asked whether she wished to go with her parents or return to the shelter home where she has stayed while her case is being determined, she “in essence” replied that she did not want to go to either.

The justices then ruled that the court “had no option” but to return her to the shelter home, and that it would provide her safety and education. The court also directed that only persons she wished to meet could visit her, but that Azhar would not be permitted to visit her.

Underage girls in such cases in Pakistan come under intense pressure, including threats to them and their families, to give false statements. A source in Karachi told Morning Star News that Islamic clerics recently visited Arzoo at the shelter home and may have pressured her to stick with her earlier statements that she married and converted of her own free will. The source's claim could not be independently verified.

The court directed the investigating officer to record another statement from Arzoo within three days.

Justices also ordered the officer to proceed with the investigation under the Sindh Child Marriage Restraint Act, 2013. The law, which came into effect in 2014, increased the minimum age of marriage in the province to 18 years, with marrying or aiding the marriage of an underage child denoted as a criminal offence.

The court made no mention of the possibility that Arzoo could have been forced to have sex with the accused during the time she spent with Azhar, which would result in him being charged with rape of a minor. Instead the court told police only to charge him under the child marriage act, a bailable offense with a maximum punishment of three years or a fine of 100,000 rupees (US$630) or both.

The court could keep Arzoo at the shelter until she turns 18, but religious rights advocates are hopeful that ultimate custody will be resolved when the court takes up the conversion issue in two weeks.

Justices K.K. Agha and Amjad Ali Sahito, who form a division bench of the Sindh High Court, ordered police to proceed against Azhar under provincial anti-child marriage laws after a court-constituted medical board conjectured that Arzoo was between 14 and 15 years old. National Database and Registration Authority (NADRA) records denote that she was born on July 31, 2007 and is thus a little over 13 years old.

Azhar’s lawyer, Ramzan Tabassum, who had claimed that Arzoo was 18 years old, argued that even if she was under 18, the marriage would be legitimate according to sharia (Islamic law). He contended that the girl was physically and mentally mature and that marriage was permissible in Islam after a person reaches adolescence.

“The medical board’s report has not disputed that Arzoo has hit puberty,” he said, arguing that Islamic law should be applied if the law of the country contradicts sharia.

According to the lawyer for Arzoo’s parents, Jibran Nasir, the court has yet to determine whether Arzoo can convert to another religion of her own free will given her age of 13.

“At this stage, only the question of child marriage has been addressed and resolved,” he added.

After Arzoo’s father, Raja Masih, reported his daughter missing on Oct. 13, police informed him that Azhar had shown them a Nikkahnama, or Islamic marriage certificate, a Sanad-e-Islam or conversion certificate and an affidavit saying she had consented to them of her own free will.

The case has sparked an outcry from the Christian clergy and rights groups.

Second Case
The development comes as allegations of forced conversion and marriage of another Christian girl, this time in Punjab Province’s Faisalabad division, have surfaced.

Farah Shaheen, 12, was allegedly abducted and subjected to forced conversion and marriage with a Muslim on June 25, according to her father, Asif Masih. He said police paid no attention to his efforts to register a case against Khizar Hayat and recover his daughter.

“The police finally registered a case against Hayat on Sept. 19, more than three months after Farah’s abduction, but to date they haven’t been able to arrest the accused or recover our daughter,” the daily wage laborer told Morning Star News.

Punjab Minister for Human Rights and Minorities Affairs Ejaz Alam Augustine told Morning Star News that he had taken immediate action as soon as the case was brought to his attention.

“We have engaged a lawyer to help the family in the case,” he said, adding that the intervention has prompted police to start conducting raids to recover the child.

Augustine said that forced conversions of minor girls is of serious concern to the government, and that lawmakers are working on a draft bill to be submitted in the Punjab Assembly next month.

Mainline Protestant and Catholic churches in Pakistan, meantime, have decided to petition courts against forcible conversion of underage girls. The Rev. Saleh Diego, vicar general of the Catholic Archdiocese of Karachi, said that the church had decided to fight the issue legally due to increased cases.

At the same time, Protestant church leaders are considering petitioning the Supreme Court. National Council of Churches in Pakistan President Bishop Azad Marshall said that all bishops of the Church of Pakistan were unanimous in their demand for the Supreme Court’s intervention in the matter of forced conversion and underage marriages.

“We will move the apex court in the coming days with the prayer to give a clear direction to the government, law enforcement agencies and the subordinate judiciary to take concrete steps on this crucial issue,” he said, noting that several judges have prohibited girl forcibly converted to Islam from being returned to their “infidel” parents.

“We pray for laws that defend our daughters,” Marshall said. “The state must fulfill its responsibility to legislate in order to protect its citizens, especially minor Christian girls.”

According to data compiled by the Peoples Commission for Minorities’ Rights and the Centre for Social Justice, of 156 incidents of forced conversions which took place between 2013 and 2019, a vast majority of the girls are minors, with numerous cases as young as 12 years old. Muslim groups oppose a minimum age for conversion or marriage, claiming that it is not sanctioned by Islam.

Although intercourse with a girl below the age of 16 is statutory rape, in most cases a falsified conversion certificate and Islamic marriage certificate influences police to pardon kidnappers.