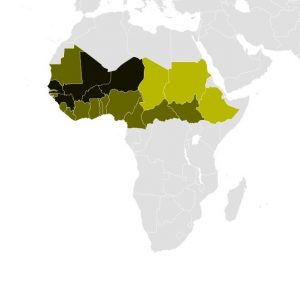 The Fulani people, estimated at 20 to 25 million, are present in a large stretch of the Sahel and West Africa. (Sarah Welch, Creative Commons)

JOS, Nigeria (Morning Star News) – Armed Fulani killed four Christians in north-central Nigeria on Friday (Nov. 6) and the next day kidnapped seven persons, including five daughters of a church pastor, according to a local advocacy group.

On Saturday (Nov. 7), armed Fulani attacked Karji, a suburb of the city of Kaduna, Binniyat said.

Also abducted was Haruna Barde, who had fled violence in his native village to take refuge in Karji, and another unidentified person, he said.

“To date, the kidnappers have yet to make contact,” Binniyat said, adding that the state government has failed to mobilize military or police personnel to bring rampant abductions to an end. “Kidnapping of Christians is occurring almost on daily basis, and this has become a source of severe worry for Christian residents living on the fringes of Buyaya, Maraban Rido, Gonin Gora, Karji and Unguwan Juji, all suburbs of Kaduna that fall under Chikun LGA.”

Binniyat said Christians have had to abandon their homes and flee for their lives after the destruction of their houses and the capture of their relatives by Fulani militia in the past year. Fulani herdsmen have taken over at least 45 Chikun County villages that were once predominantly Christian, he said.

Niger State Attacks
In northwest Nigeria’s Niger state, Fulani herdsmen killed one Christian and abducted nine others on Tuesday (Nov. 10), according to an area Christian leader.

In a series of coordinated attacks on ethnic Gbagyi, the Fulani killed the unidentified Christian in Alei village and abducted the other nine from Nasapa village, said Godspecial Moses, director with Glorious Missions.

“Many of the villages have been sacked with the Christians in the area moving to Zumba town, the headquarters of Shiroro Local Government Area, and in Gwada town,” Moses said. “Many of the affected Christians slept in the open along the roads and in any available open space. A few Christians are still left in Nauna but slept in the bush since the attacks began.”

Attacks on area Christian communities have become common, he said.

“Please join us to pray that God should arise and defend His people, and to discomfit the enemy and their evil informants,” Moses said. “Pray also that the Niger state government and indeed the federal government will muster the political will to fight this evil to a stop. There is power in corporate prayer. Let’s pray.”

Christian leaders in Nigeria have said they believe herdsmen attacks on Christian communities are inspired by their desire to forcefully take over Christians’ lands and impose Islam as desertification has made it difficult for them to sustain their herds.