At least two Christians were sought out and killed by jihadists who invaded a town in Nigeria’s northern Yobe State on 23 April.

Around 2,000 residents of Geidam fled their homes after members of Islamic State West Africa Province (ISWAP) took control of the town, looting and burning stores.

“Everybody is running away because the insurgents have started killing people who are Christians and those with Western education,” said a resident. 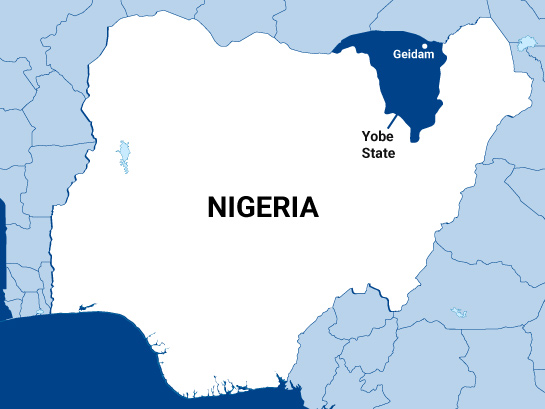 “So far they have killed two Christians and two Muslim school teachers. They went to their homes and slaughtered them,” said another local.

A Barnabas contact said that one of the murdered Christians was a member of the Evangelical Church Winning All (ECWA). The church secretary said they were struggling to recover his body for burial. “Our members at Geidam are now displaced,” he said. “We need your prayers.”

The death toll from the attack was unknown at the time of writing; however, at least eleven residents died when a projectile hit two adjoining homes, killing all occupants, as the jihadists fought to take over the local army base.

According to an eye witness, the jihadists dropped ISWAP leaflets around the town, calling for the establishment of an Islamic state. “We are fighting unbelievers; Christians and any other person or group going against the teaching of Islam even if they are Muslims,” the leaflets stated.

The army claimed to have taken back Geidam from the jihadists on 24 April but residents and local officials said militants were still in the area.

The breakaway Islamist terror group, Islamic State West Africa Province (ISWAP), is led by Abu Musab al-Barnawi. The group split from Boko Haram in 2015, partly due to the extreme brutality of Boko Haram’s leader Abubakar Shekau, and is active in north-east Nigeria.