In another village, Muslim relatives destroy home of new believer. 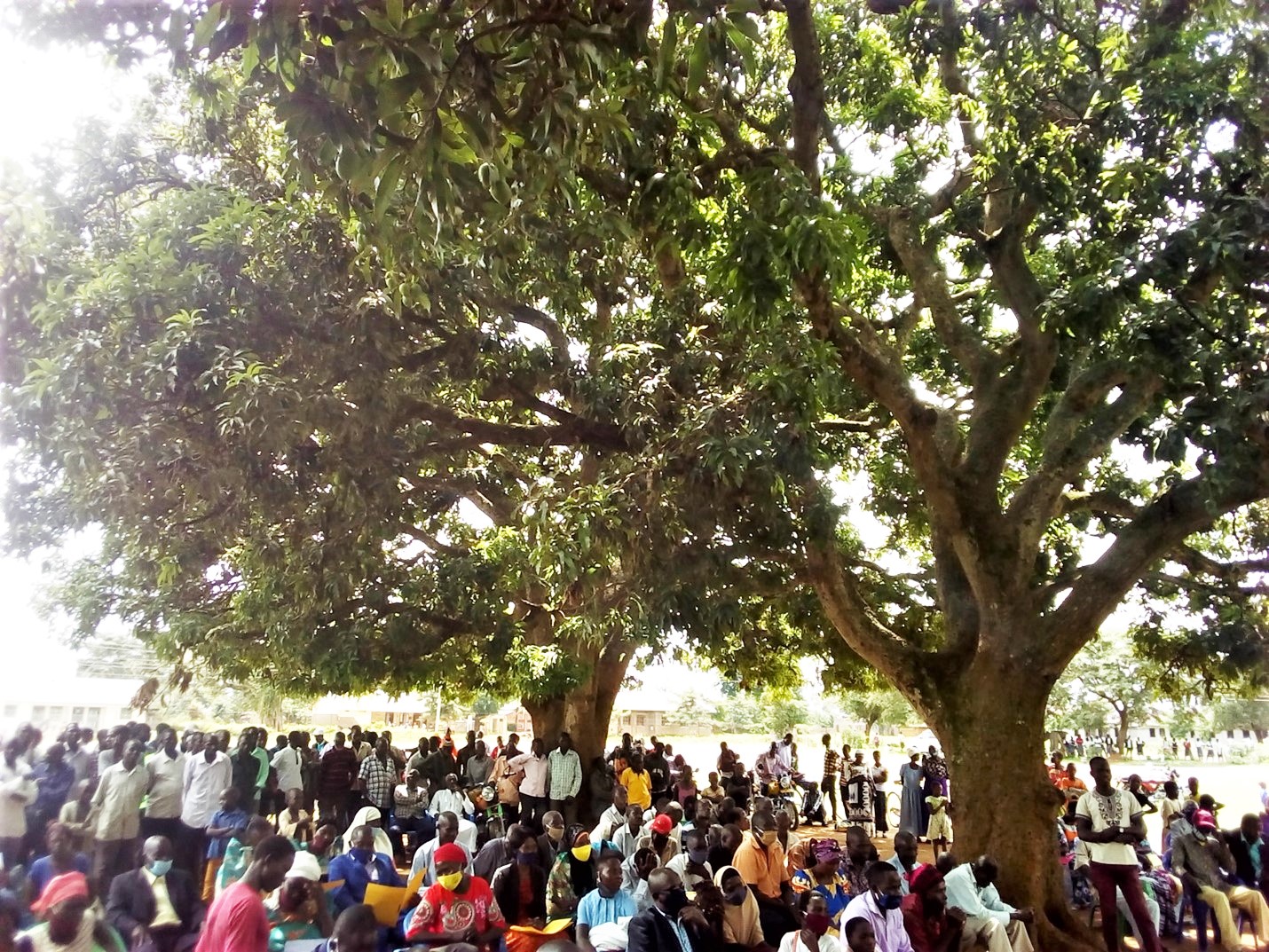 Community members gather on May 23, 201 after the killing of Fred Isiko in eastern Uganda the previous evening. (Morning Star News)

Christians at the funeral of evangelist Fred Isiko, who drove a van for Ashirafu Kasenyi’s cargo transport company, said Kasenyi was behind the killing of Isiko on May 22 in Kagumu village, Kibuku District.

On May 23 police arrested a suspect who said Kasenyi had sent him to kill Isiko, sources said. That day Kasenyi was killed when a mob of more than 50 angry residents, most of them members of churches, attacked him.

When Kasenyi on the evening of May 22 called Isiko to meet with him, the Christian known for proclaiming Christ within and outside church walls got friend Francis Maka to accompany him, Maka said.

“When we met Kasenyi, he gave Fred some money to go and buy some meat at Kadama trading center and to bring it back for supper so as to have a business discussion the following day,” Maka told Morning Star News. “As we were about to reach the trading center, three people stopped us. They said that they have some information for Fred. So I moved at a distance, and immediately one of them removed a long knife and cut his neck as I fled for my life and reported the incident at Kagumu police post.”

Police and hundreds of people converged around Isiko’s body early the next morning, he said.

Earlier in the month Isiko secretly recorded a conversation on his phone in which Kasenyi, a Muslim teacher known as a sheikh, threatened to fire him if he refused to convert to Islam, a relative said.

“You need to convert to Islam if you are to remain as my employee,” Kasenyi says in the May 7 recording, the relative said. Isiko replies, “I am not going to leave Jesus Christ; better to resign than leave Christianity.”

After Isiko was killed, police arrested a suspect who said Kasenyi contracted him and four others to kill Isiko and seven pastors, Maka and others said.

Kibuku police rang Kagumu police ordering them to arrest Kasenyi, but before they could do so community members went to his home and killed him, sources said. They also destroyed his house, gardens and livestock, they said.

Police have arrested just one unidentified suspect in the killing of Kasenyi, sources said. Kasenyi, also known as Kasenyi Jackson, had been a Christian until converting to Islam in 1992.

House Destroyed
Also in Kibuku District, Muslim relatives of a newly believing Christian on May 23 burned down his family’s house in Nansyono village.

The attack came after Louis Levi Baula, 46, took his 3-year-old son to a church service on May 2 for healing from seizures and other symptoms. 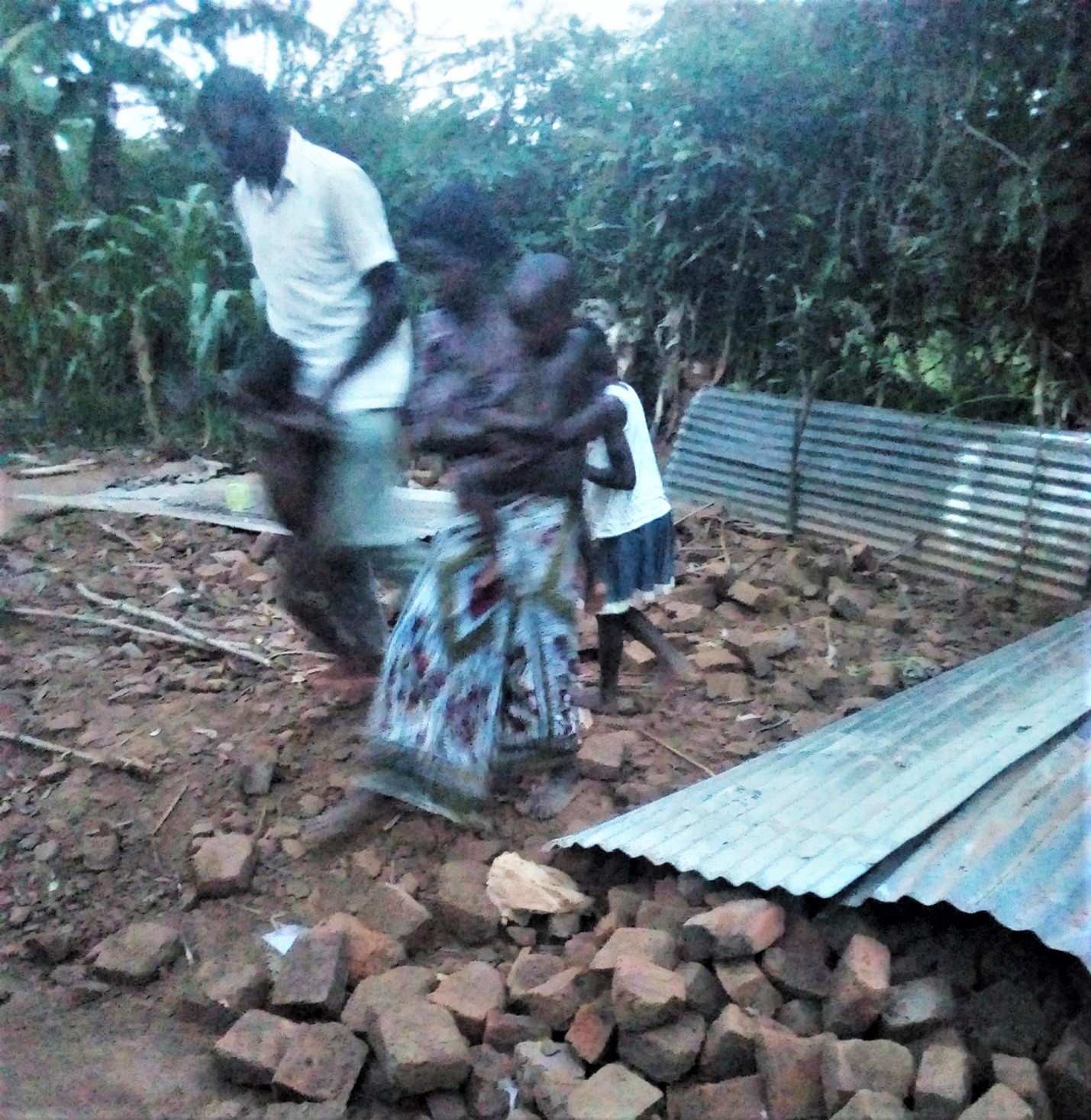 Louis Levi Baula and family after Muslim relatives destroyed their home in eastern Uganda on May 23, 2021. (Morning Star News)

“Our sheikh had been praying for the child, and we had spent 350,000 Uganda shillings [US$100] given to the sheikh as well as spending a large amount for the treatment of the child in various hospitals, but all in vain,” Baula told Morning Star News.

The pastor of the church, unidentified for security reasons, was initially alarmed by the family as they arrived in their Islamic attire, and he directed ushers to question them, Baula said.

“After we explained our troubles and suffering, the pastor prayed for our child, and immediately his restlessness and abnormal behavior stopped,” Baula said. “The pastor told us to believe in Jesus. We were then convinced that Jesus had healed our son, and we accepted to be prayed to have Jesus as our Lord and Savior.”

Their son was then able to eat food served after the service without the problems he had shown previously, said Baula’s wife, Sifah Ainekisha, and the family was convinced that he had been delivered from his torments.

“We went back home but did not tell anyone, except I shared with my mother-in-law about the prayers in church that made my child well, and that we were planning to go back to the church the following Sunday,” Ainekisha said. “She kept quiet.”

The next Sunday the family attended the worship service and thanked the church for the prayers that healed their son, she said. When they returned home, more than 20 Muslim relatives had gathered outside their home, Baula said.

The relatives began questioning them, and Ainekisha told them that they had taken their son to church for healing prayer, Baula said.

“One called Musitafa slapped her badly and said, ‘Allah Akbar [God is greater], be quiet,’” Baula said. “We thought that they were going to kill us, but they only warned us not to attend the church, and the meeting ended.”

They did not attend the service the following Sunday, May 16, but that evening the pastor visited and prayed for them, he said. They rose early in the morning of May 23 to attend the church service, returning at 5 p.m. to find three of their goats missing, Baula said.

“A relative named Hamisi told me that Allah had taken the goats,” he said. “I was scared by that statement and came back and told my wife.”

She told him they must relocate, he said. Their children are ages 10, 6 and 3.

“As we were thinking of where to go, at around 9 p.m. we heard hens making a lot of noise in the kitchen, and when I came out, I saw smoke and flames going up the roof, and I went back and told my wife that we are dying,” Baula said. “We picked up our children and went out very fast, and within a short period my brothers, sisters and Muslim neighbors together with an imam arrived. The imam recited the Koran, and then later told my brothers to start destroying the house.”

They watched the destruction of their house and all their livestock, he said.

“The imam told us that from today we were no longer one of the family members, that we were kafir [infidels] and that we should leave the homestead immediately to go and look for other infidels,” Baula said. “He added that had it not been the law of our state, we would face death, but ‘go out of here since you have disobeyed Allah and his messenger.’”

Prohibited from taking anything, they left with only the clothes they were wearing, he said.

The family reported the incident to the chairperson of LC1, Moses Magona, who said that he had received a phone call from one of their relatives that Baula’s family had been disowned.

“I received a telephone call from Samuku Kalimu that the whole family has disowned you for leaving Islam but would not kill you – but that if you resist, then they were ready to kill you,” Magona told him, according to Baula.

The family has taken refuge in another Christian’s home.

“We as a church are afraid because the Muslims might attack our church,” the church pastor said. “We have reported the incident to the police post at central ward, Kasasira Town Council.”