Several Christians were injured in a shooting incident on September 6 in the Shera Kot district of Lahore, Pakistan, a Barnabas Aid contact reports.

A group of six or seven Muslims opened fire on the houses of Christian residents in the district at about 2.30 p.m.

Five Christian women, one of them pregnant, and one man were injured in the shooting. Three of the six are in critical condition. The man, Asif Nawab, was returning home from work when an attacker opened fire, injuring him in both legs. 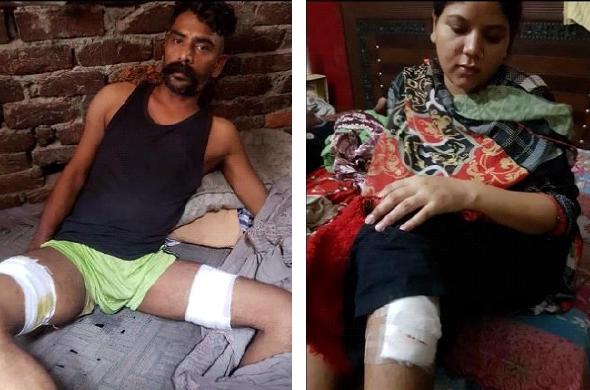 Six Christians were injured as Muslims opened fire, including Asif Nawab (left) who was injured in both legs [Image credit: AsiaNews]

The attack stems from a dispute between a Christian named Asghar and a Muslim, Dilshad Doggar, according to a local church minister, Pastor Adnan, though details of the alleged dispute are not known.

Dilshad Doggar, along with several armed young Muslims, moved towards Asghar’s house that afternoon. Asghar was not at home at the time and has not returned home since the incident. The attackers also fired at several Christians’ houses and at the church building.

The Shera Kot police investigated the matter and registered a First Information Report in response to Asif Nawab’s complaint. Ten suspects were arrested, and the two alleged main culprits are also in the custody of the police as the matter is being investigated further.

The case has been filed under charges of attempted murder and rioting with use of deadly weapons.

Shera Kot is home to around 60 Christian families living among a larger community of Muslims. Since the incident, Christians have stayed in their homes, and police security has been provided for them.

Violent attacks on Christians are becoming more common in Pakistan. On May 15 at least eight Christians were left with fractured bones after the small Christian community of Chak 5, a village in the Okara region of Punjab, was terrorized by a Muslim mob of around 200 people.