A pastor was shot and killed by Tatmadaw soldiers in Thantlang township, Chin State, Myanmar, as he was trying to help put out a fire caused by an artillery attack.

The attack on 18 September, part of an intensifying of the conflict in Chin State, resulted in the destruction of up to 19 houses.

The pastor, named as 31-year-old Cung Biak Hum, was at the time of the shooting riding his motorbike towards the damaged houses in order to support efforts to bring the blaze under control. 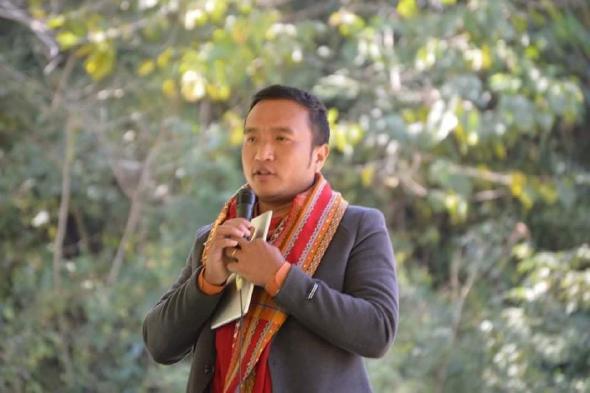 Pastor Cung Biak Hum was trying to help efforts to extinguish a blaze caused by artillery fire when he was shot dead by Tatmadaw soldiers [Image credit: Irrawaddy]

Soldiers are also reported to have cut off Pastor Cung’s finger in order to steal his wedding ring.

“We are deeply hurt and frightened by the killing of the pastor and stripping of a golden ring by cutting off his finger, as well as the looting of [his] watch and mobile phone,” said the Chin Baptist Convention in a statement released on Sunday 19 September.

“The military’s attack on church buildings, occupying churches and destroying church property, and bombing civilians’ homes is an insult to the religion and the believers,” the statement continued.

In an earlier attack on 14 September a church in Thantlang was hit by artillery fire from the Tatmadaw (Myanmar military).

UN Special Rapporteur for human rights in Myanmar Tom Andrews said, “The murder of a Baptist minister and bombing of homes in Thantlang, Chin State are the latest examples of the living hell being delivered daily by junta forces against the people of Myanmar.

The ongoing violence in Chin State has displaced thousands of people, with an estimated 1,800 fleeing across the Indian border to seek refuge in the state of Mizoram.

Earlier in September the entire population of Taal village in Chin State was forced to flee after soldiers ransacked homes, killed animals and destroyed valuables, including Bibles and hymn books, during a series of raids.

The Chin population of Myanmar is thought to be at least 90% Christian. The Tatmadaw has for many years persecuted the Christian-majority Chin, Kachin, and Karen ethnic groups as well as the Muslim-majority Rohingya.