Five Christian families in rural Laos are still waiting for new homes promised to them by government officials, months after being evicted from their villages by local leaders.

The 21 Christians from Pasing-Kang village and Pateum village in the Ta-Oey district of Salavan province in southern Laos were evicted in October 2020 and January 2021, respectively, for refusing to renounce their faith. Their homes were demolished.

Officials from the district government of Ta-Oey had ordered that new homes be built to replace the old ones, but village leaders have not done so. 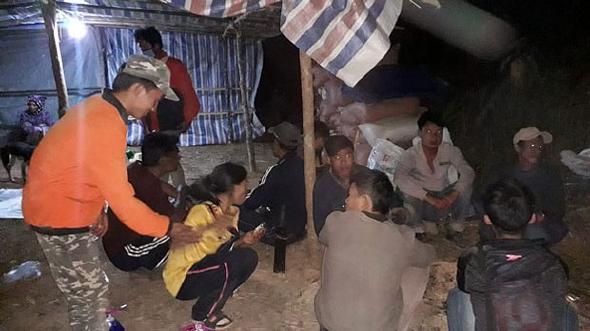 Lao Christians living in tents after their homes were demolished following eviction from their villages [Image credit: Radio Free Asia]

One of the 14 Christian villagers evicted from Pateum said, “My family and I are still living in small huts in our rice field near the forest. We’re still homeless.”

The Pasing-Kang group of two families spent a month living in two small huts in a nearby forest. During this time, they had restricted access to food and lived on a diet of rice and water. They returned to their village in November 2020, but were denied permission to rebuild their homes by the village chief.

Members of the church in Ta-Oey district who spoke to village authorities about building new homes for the five families were referred to the district authorities. The latter instructed the church members to go back and talk to the village chief. A submission of the matter to government of Salavan province was met with an instruction to consult the district and villages again.

Ta-Oey district authorities have said that, while they will not build new homes, they will put pressure on the village leaders to do so and ensure that Christians will not be harassed again. Christians, however, fear that persecution will continue.

“Authorities at all levels are just ignoring this problem and have no intention of helping these Christians at all,” said a church member. “Those who renounce their faith will be left alone, but those who refuse will have to leave their villages, and their homes will be destroyed.”