A Christian teenager who had suffered burns of up to 70 per cent of his body following an acid attack in Gaya, Bihar state, India died in hospital on Sunday 26 September.

The attack and the subsequent death of young church leader Nitish Kumar was confirmed by Barnabas Fund contacts.

The family of Nitish believe that the attack was carried out by radical Hindutva nationalists in reprisal for Nitish’s refusal to stop holding daily prayer meetings in his home. Police, however, have said that the death was a suicide. 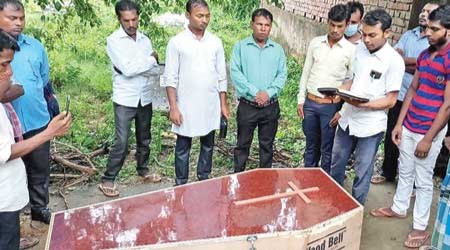 Nitish Kumar was buried on 26 September after finally succumbing to his injuries sustained in an acid attack [Image credit: The Telegraph India]

Sanjeet, the victim’s elder brother, said that on 11 August, around 6.30 a.m., Nitish had gone to buy vegetables from the local market. “He had hardly gone 750 metres when three men on a motorcycle threw acid on him,” said Sanjeet. “He started burning and rushed back screaming.”

The station house officer of Mahkar, the local police station, has claimed that Nitish burned himself to death in response to a family argument.

“We conducted inquiries. It was the result of a family dispute,” said the officer. “The victim was sporting long hair and his elder brothers forcibly cut it … he set himself on fire and suffered burns.”

These claims have been vigorously disputed by Nitish’s family. “This is not true,” said Ranjeev, another of Nitish’s brothers. “Some people threw acid at him. We wanted to register an FIR [First Information Report] and had gone to the police station, but the police were not helpful.”

Dr Kamod Narayan Tiwary, owner of the hospital where Nitish was treated, reported, “When I saw the boy, 70 per cent of his body had burns. Both hands, his back, parts of the chest, both thighs and a leg had severe burns that seemed to have been caused by acid or a similar chemical.”

Ranjeev added that threats against the family, which began in July, had increased since the attack.

An Indian church leader told Barnabas Fund that until now Bihar has not been known for anti-Christian violence, adding, “I am worried that this will become a model of attack for others to follow. Christians in smaller communities have become more and more vulnerable to such attacks.”

In July 2021 the Evangelical Fellowship of India warned of increasing targeted and communal violence against Christians across the country.