Former Archbishop of Canterbury Lord Carey of Clifton has denied that Christian faith is “a visa advantage” for believers in the Middle East fleeing persecution and violence.

The claim was made in a leading article for The Times [paywall] discussing the onslaught against Christians in Syria and Iraq by the Turkish military.

The Times suggested that “many Christians have received preference in applications for visas to the West”, and that this “has prompted envy and anger among their non-Christian neighbours, who say that Christianity is now more a visa advantage than a faith”. 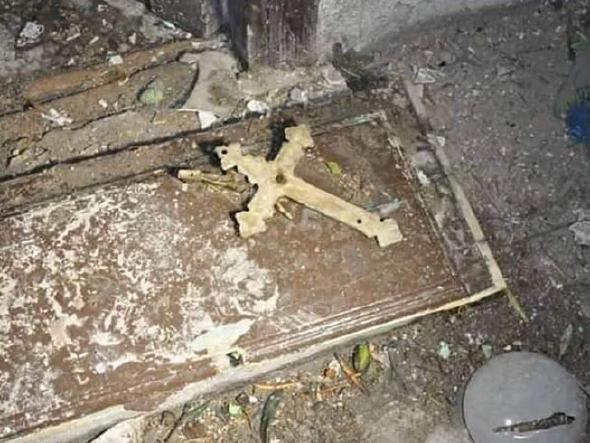 Debris in a Christian home in Qamishli that was hit by a Turkish shell in October 2019. Turkish airstrikes in Syria and Iraq have displaced thousands of Christians

The claim that Christians are receiving any preference is flatly denied by Lord Carey in a subsequent letter to The Times [paywall].

The article, said Lord Carey, “is right that the exodus of Christians from their Middle Eastern homeland is a tragedy that is gathering pace. I doubt, however, that it was ever true as you state that Christianity could have been described as a ‘visa advantage’”.

“Christian refugees from Iraq and Syria have struggled to be accepted for resettlement to any Western country, particularly the United Kingdom”, he added.

“Barnabas Fund, an aid agency of which I am a patron, obtained government figures in 2017 and 2018 which showed that, out of more than 8,000 Syrian refugees settled in the UK, only 25 were Christian (0.3 per cent). Before the Arab Spring, Christians represented about 10 per cent of the Syrian population.”

Noting that Afghan Christians are now suffering the same situation, Lord Carey argued that the relocation scheme run by the United Nations High Commissioner for Refugees (UNHRC) “discriminates against minorities to this day”.

In a previous article for the Daily Telegraph (1 September 2021), reproduced for Barnabas Fund, Lord Carey explained, “The UNHCR’s programme is functionally discriminatory because those applying for asylum do so through camps which are often no-go areas for religious minorities.”

Since August 2021 Turkey has escalated a supposedly anti-terrorist military campaign in Syria and Iraq which appears to be targeting Christians and other minorities. “It is unclear,” argued an analyst in The Jerusalem Post, “why [Turkey’s] claims to fight ‘terrorism’ often coincide with bombing minorities in Iraq and Syria and carrying out attacks against Christian, Kurdish and Yazidi minorities.”