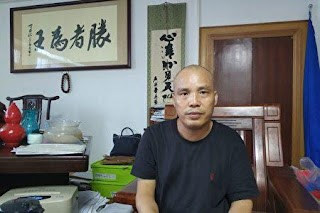 Qin Yongpei, Chinese human rights lawyer.
(Photo: ChinaAid Resource)
(Nanning, Guangxi Province—January 11, 2022) The outcome of the secret trial of human rights lawyer Qin Yongpei held in Nanning Intermediate People’s Court on December 31, 2021, remains unclear. The British Embassy in Beijing tweeted that some Chinese authorities routinely prosecute human rights defenders during Christmas, hoping that international observers will fail to notice. According to the embassy, the trial of Lawyer Qin which included restrictions on observers attending court raised critical concerns about the rule of law in China. The French embassy in China posted on Weibo: “Qin Yongpei has devoted his life to defending others, the allegations against him are baseless, and we demand his immediate and unconditional release.”

On December 29, 2021, prior to Lawyer Qin’s trial, local public security and national security police in Guangxi Province harassed local dissidents, human rights lawyers, supporters of Lawyer Qin, and their families. Authorities warned these individuals/groups not to defend, gather around to observe, have meals together, or express opinions on Lawyer Qin’s case.

In March 2020, the Nanning Public Security Bureau of Guangxi Province stated in its letter of recommendation to initiate prosecution to the procuratorate that Lawyer Qin had posted the following on social media Twitter:

CCP authorities released Lawyer Qin’s previous public comments. They confirm that as a lawyer, he is a profound critic and adviser. Although some of Lawyer Qin’s remarks may seem “excessive,” “inappropriate,” or even “joke materials,” the CCP’s totalitarian regime considers them “fabrication,” “distortion” and “incitement to subvert State power.”

While CCP authorities detained Lawyer Qin for two years and two months, they did not approve any reprieve for Lawyer Qin while they held him in custody. During this time, Lawyer Qin’s mother passed away. Consequently, he did not get to say his final goodbye to her.

While practicing as a lawyer for more than ten years, Lawyer Qin defended other human rights lawyers the CCP authorities had targeted for crackdowns. He provided legal aid to vulnerable groups, and represented cases involving illegal administrative detention, industrial pollution, forced demolition of houses, and wrongful convictions. Lawyer Qin also founded and served as the director of Baijuming Law Firm in Guangxi, where several human rights lawyers from Guangxi have worked. In July 2015, during the “709 crackdown” against human rights lawyers and human rights defenders across China, the police seized Lawyer Qin for interrogation.

In May 2018, CCP authorities revoked Lawyer Qin's attorney’s license and ordered his law firm to close. Subsequently, he established a legal consulting company and continued to engage in legal work. Simultaneously, he co-founded the “Disbarred China Lawyers Club” to support and provide mutual assistance to human rights lawyers with CCP lawyers’ licenses revoked. Lawyer Qin frequently posted comments on State policies and actions on online platforms. As he criticized officials for abuse of power and human rights abuses, CCP authorities shut down many of his social media accounts.

Although Article 27(2) and Article 47 of the Chinese Constitution stipulate that a Chinese citizen has the right to criticize and make suggestions to any State organ or State functionary, the outcome of the secret trial of human rights Lawyer Qin remains cloudy. The reality of a Chinese citizen’s constitutional recorded rights, like outcomes of some secret trials of human rights lawyers like Lawyer Qin, continue to contribute to critical concerns about the rule of law in China.


For look!
The wicked bend their bow,
They make ready their arrow on the string,
That they may shoot secretly at the upright in heart.
~ Psalm 11:2 (NKJV)
China Aid exposes abuses in order to stand in solidarity with the persecuted and promote religious freedom, human rights, and rule of law. If you wish to partner with us in helping those persecuted by the Chinese government, please click the button below to make a charitable donation.