The conflict in Ukraine is already having a knock-on effect on food supply around the world, especially in the poorer regions that have long suffered from food insecurity and famine.

Russia exports more wheat than any other country in the world, while Ukraine is also one of the world’s largest exporters. Together the two countries export on average 59 million metric tons of wheat, estimated at between 23% and 33% of the global total.

The two countries are also leading exporters of other grains, seeds and vegetable oils, as well as much-needed fertilizers. 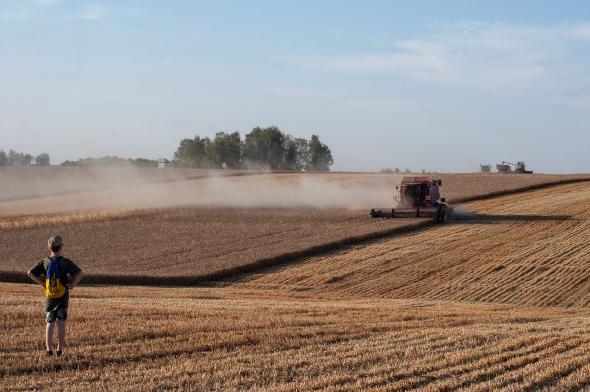 Harvest in western Ukraine. The ongoing conflict may mean a smaller harvest in 2022, the inability to export wheat and other food supplies, and food prices that rise beyond the means of the world’s poorest people

Wheat supplies in Ukraine are directly impacted by the ongoing conflict. Planting season for farmers is due to begin in just two or three weeks. Continued fighting could ensure a smaller than usual harvest later this year.

The economic shocks caused by sanctions and global uncertainty will also contribute to rising food prices, even in those countries not directly reliant on imports from Russia and Ukraine.

The effects of the conflict are already being felt across North Africa and the Middle East, the global region most reliant on Russian and Ukrainian food imports.

Prices are rising in Egypt, which imports 70% of its wheat from Russia and Ukraine, and the government is scrambling to find alternative suppliers.

Syria, already burdened with drought and U.S.-imposed sanctions, was last week forced to announce wheat rationing as an emergency measure.

Anti-government protests in Morocco over rising food prices put some observers in mind of the “Arab Spring” of a decade ago.

Countries in Asia – Indonesia, Bangladesh and Pakistan are all among the top importers of wheat from Russia and Ukraine – and sub-Saharan Africa are also likely to suffer.

A Billion Facing Malnutrition and Famine

The crisis in Ukraine comes at a time when – owing to various conflicts, natural disasters and the Covid-19 pandemic – food prices were already at their highest point since 2011.

In late 2021 it was estimated that a billion people worldwide are facing malnutrition as the global food crisis worsens, with 45 million already on the brink of famine.

While famine is an issue that affects all people, Christians who are already persecuted and impoverished are often among the worst affected.

Ask the Lord for His intervention in Ukraine, that He will bring peace to the whole region and be especially close to His people. Pray for the hungry across the world, that food supplies will not be diminished, that prices will not spiral out of control, and that the efforts of charities and aid agencies to help the vulnerable will succeed.

Barnabas Aid is working with partners to send aid for Ukrainian Christians in their hour of need. A gift of $20 will pay for a food package that could last a young couple with a child for about a week, or an elderly couple on their own for two weeks. Please see our appeal if you would like to help.

Through our food.gives initiative, Barnabas Aid is joining the fight against food insecurity, hunger and starvation around the world. Please visit https://www.food.gives/us to find out more.