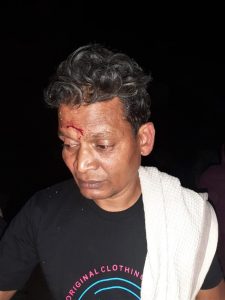 NEW DELHI (Morning Star News) – Pastor Rakesh Babu was about to go to bed one night earlier this year in northern India when eight Hindu extremists broke into his house, beat and choked him and slit his wife’s throat, he said.

The eight assailants, including two women, who had accused him of luring people to convert to Christianity, intruded into the 51-year-old pastor’s home in Uttar Pradesh state’s Vyaspur village, Chandauli District after he had said his night prayers at about 10:15 on Jan. 14. After throwing him to the floor and beating him and his brother, 30, with wooden sticks, one of them began to choke him while the others shouted to kill him, he said.

His brother, Anand Babu, lives in a separate house but with a common kitchen, and he was bringing the pastor warm drinking water when the Hindu extremists attacked, he said. Bleeding, Pastor Babu managed to escape and ran into wet farmland, and when he fell, the assailants came and struck him with wooden sticks.

Pastor Babu’s son happened to be at Anand Babu’s house at the time.

“My son came and wept before the assailants – he pleaded with them to not hit me,” he said. “While he was pleading, I got an opportunity to escape, and I hid myself in a Christian home.”

The assailants intended to kill him, he said.

“If my son wouldn’t have come, and I would have not escaped, they would have killed me,” Pastor Babu said. “If I would have fallen unconscious in the muddy puddle, I would be dead, because they were chasing to kill me.”

As villagers gathered at the commotion, the assailants left after loudly threatening him, telling him to stop leading church services, he said.

His wife, Rekha, did not receive stitches or other proper medical care for her neck wound, as there was no doctor available, Pastor Babu said. He took her to another hospital the next day, but as it was a weekend, there was again no doctor available. After the weekend, it was too late to get stitches.

“Outwardly, the wound might appear dry, but still there is swelling and the wound is not healed from the inside,” he said three weeks after the attack.

His wife and brother groaning in pain and suffering fainting spells, Pastor Babu the night of the attack went to the Shahupuri police post to report it, but police declined to register his complaint and sent them to a hospital for first aid.

After receiving initial treatment, the pastor, his wife and brother went to the Mughalsarai police station, where officers also initially refused to register a complaint, he said.

“It was only when a senior officer came and scolded them that they registered our complaint,” Pastor Babu said. “We were in very bad condition physically.”

Police had yet to register his complaint when the officer in charge of the Shahupuri police post arrived at the Mughalsarai police station with two of the suspects he had arrested, the pastor said.

“The two assailants brought to the police station were released the next day,” he said. “It was an eye-wash.”

The next day police registered his complaint but changed his account in the First Information Report, he said. His handwritten complaint originally stated that eight “anti-Christians” attacked them, that he was able to identify four of them, and that they intended to kill them. He also stated that before the assailants left, they said they belonged to the Rashtriya Swayamsevak Sangh, a Hindu extremist organization, and that if Pastor Babu did not discontinue church services, they would kill them, he said.

“Despite clear words in my complaint letter, the police changed the words,” Pastor Babu said. “An officer dictated to my son, and he was scolding my son and making him write the words he was saying. They even forced him to write that the attack was caused due to a land dispute between me and the assailants, and that the place of attack was my farmland, which is completely a lie.”

Though he disapproved of the police account in the FIR, he had no strength to argue, he said.

“Me, my wife, and brother were badly wounded – we were groaning in pain,” he said. “My wife’s deep cut was bleeding. She and my brother were fainting with pain and hurt. We had not slept all through the night but were running from police post to the hospital and then to the police station. I knew we were not treated fairly, but I gave in and signed the document confirming the story.”

The FIR (No. 0013, dated Jan. 15) names four assailants from the same family who live near his house – Suryakant Suman, Srikant Suman, Sushielkant Suman and another identified only as Shashikant – under Indian Penal Code charges of voluntarily causing hurt, intentional insults and provocation and criminal intimidation, he said.

Pastor Babu said police were working hand-in-glove with the assailants in filing the lesser charges.

“It was all planned,” he said. “They tried to weaken my case wherever possible. Police soldiers were sent to the hospital where we were taken for a medical investigation. The soldiers spoke to the doctor, and the report too was made in a way such that my case would not appear to be strong.”

While the assailants accused and threatened the pastor on religious grounds, they did have a prior land dispute with him, Pastor Babu said.

He had refused to sell the Suman brothers a small piece of farmland that they wanted, and they had continued demanding it and tried to encroach on his land, he said. When on Jan. 6 they dumped bricks and construction sand on his land, he reported it to Shahupuri police. Officers called one of the Suman brothers to the police post on Jan. 8, and the parties reached a compromise, the pastor said.

“After Suman agreed to remove the material from my land, he started to accuse me of running a church and alluring people to convert,” Pastor Babu said. “He said that I get 20,000 rupees [US$265] every month for this task from foreign countries.”

The Suman family also accused him spending large amounts of money from abroad to organize his church’s Christmas program, he said.

“But the truth is that the money is collected from among the believers attending my church,” he said. “They gladly and generously contribute for the program.”

When one of the Suman brothers met with him at the police station over the land dispute, in the presence of police he introduced himself as an active member of the branch RSS, the pastor said. The officer then turned to Pastor Babu, he said, and peppered him with questions: “Why have you become Christian? If you pray and believe, then you do so – why do you preach to others?”

The officer then turned to Suman and said, “You film a video of him, and on the basis of that, I will send him to jail,” and then began to threaten Pastor Babu, the pastor said.

Suman also told the officer that he had raised several complaints against Pastor Babu, but that each time no action had been taken against him, the pastor said. He said the Hindu nationalist also mentioned submitting a written complaint against him at the district magistrate’s office three years ago, accusing him of being Christian missionary who fraudulently lured people to convert.

Pastor Babu said he was shocked to learn that Suman was trying to frame him for so many years and that he was not aware of it, though police detained him three years ago.

“At that time, police had come to my house to investigate and had detained me and taken me to the police station for questioning,” he said. “So I asked the officer to investigate about me, and if I am found guilty, that action should be taken against me. After this, he let me go.”

On Jan. 9, the day after the two parties had reached a compromise, a member of Suman’s household phoned one of Pastor Babu’s church members, known only as Jitender, and demanded all videos he had recorded of church services and programs. Pastor Babu told Jitender not to comply, but Suman family members went to Jitender’s shop while he was absent and seized church videos from his nephew, who knew nothing about their intentions, the pastor said.

“The video that they obtained was filmed on the Christmas program, and there was nothing that they could frame me or trap me with,” Pastor Babu said.

From Jan. 10 to Jan. 13, the Suman family started a door-to-door signature campaign requiring the consent of villagers to demolish the church site, he said. Villagers told him that those refusing to sign were receiving threats from Suman and his cohorts.

“When they were not successful in gathering enough signatures, they directly attacked us,” Pastor Babu said. “We had no argument or fight with them. They targeted us because we are Christians.”