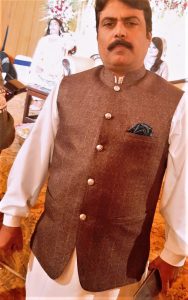 Cybercrime officials from the Federal Investigation Agency (FIA) Gujranwala Circle raided the Lahore home of Fansan Shahid, 54, shortly after midnight and took him into custody on allegations that he had blasphemed Muhammad, Islam’s prophet, in a comment on Facebook in 2019, said his wife, Safia Shahid.

“When my husband opened the gate, over a dozen policemen rushed inside and started beating him up,” Shahid said. “My two children and I screamed and cried as they tortured Shahid and searched the rooms.”

The agents seized Fansan Shahid’s phone, a photograph and his national identity card and put him into their vehicle, she said. They told her they were taking him to Gujranwala city because the complaint against him had been registered by an Islamist cleric who is a resident of Sialkot District.

Safia Shahid said her husband lost his cellphone in 2019.

Her husband would never post such comments as he was fully aware of the consequences, often reminding their 24-year-old daughter and 22-year-old son to refrain from discussing religion with Muslims, she said.

“His late father was a pastor affiliated with the Full Gospel Assemblies, and Fansan maintained good relations with his Muslim coworkers, and a majority of his friends were also Muslim,” she added.

Due to retire as a purchase officer at Pakistan Railways in eight years, Fansan Shahid was the sole breadwinner for the family, and to supplement his income he was also involved in property dealings with some Muslim friends, she said.

“He had good relations with everyone, and I can’t recall him mentioning any threat or pressure on him,” Safia Shahid said.

When she met with her husband briefly in FIA custody in Gujranwala on Wednesday (March 17), he told her they had tortured him into confessing the alleged crime, she said.

Her husband has multiple health problems, and as blasphemy cases go on for years without chance of bail, she said she was extremely worried about how her family would cope.

“Today, our entire family fasted and prayed for Shahid’s early release from this false accusation,” Safia Shahid told Morning Star News. “Our faith is firm in our Lord, and I pray that may He have mercy on us and rescue us from this ordeal.”

Safia Shahid said that she was very concerned about her children’s future and financial security since it was likely that her husband would lose not only his government job in prolonged incarceration but also his retirement fund.

“I don’t know what will happen to us, because my children are still studying, and we live in a rented portion,” she said. “There is no other Christian family in our neighborhood, and I don’t know how our landlord or Muslim neighbors will react when they come to know about the nature of the charge against him.”

She appealed to church leaders and other Christians to help the family through this difficult time.

Malook, who overturned the convictions of Aasiya Noreen (better known as Asia Bibi) and others falsely accused of blasphemy, told Morning Star News that the First Information Report (FIR No. 17/22) indicated the FIA had acted on a complaint of Allama Waseem Raza of Jamkay Cheema, Daska Tehsil of Sialkot District, on May 3, 2019.

“The complainant has alleged that a person named Suleman Masih, a resident of Jamkay Cheema, had shared a controversial post on Facebook on which another user, ‘Farhan Shahid,’ had made a blasphemous comment,” Malook said.

The FIA investigation concluded that Fansan Shahid was operating the account under the name of Farhan Shahid and arrested him, Malook said. Shahid has been charged under Sections 295-C, which calls for a mandatory death sentence for blaspheming Muhammad, and 295-A, which mandates up to 10 years in prison for “deliberate and malicious acts intended to outreach religious feelings.”

Malook said the FIA claimed Shahid had “confessed to the crime,” but that statements given during custody have no legal value unless they are recorded in the presence of a magistrate or judge. He said it was not known yet if the other Christian named in the FIR had also been taken into custody.

“Further details will come to the fore after I meet the accused,” he added.

Bishop Azad Marshall, Church of Pakistan moderator, expressed concern over the charges and said he would make efforts to help the family in any way possible.

“We are not yet aware of the underlying facts of the case, but we believe it is our responsibility to stand with the family and pray for their early reunion with their loved one,” Marshall said.

“The government’s failure to curb the misuse of the blasphemy laws is emboldening false accusers,” he said, adding that almost all the accused are forced to spend years in jails and remain at serious risk of vigilante attacks before courts clear them of the dangerous charge.

“We have time and again demanded additions to the blasphemy statutes to penalize false accusers,” he said. He added that trial courts usually hand death sentences to the accused under pressure of religious zealots, though their convictions are overturned by superior courts after years of incarceration.

“Who is responsible for all the years innocent people are forced to spend in prison?” he said. “It is high time the state assumes its responsibility and punishes false accusers of blasphemy instead of putting the onus of prosecution on those falsely accused of the crime.”

Pakistan ranked eighth on Open Doors’ 2022 World Watch List of the 50 countries where it is most difficult to be a Christian. The country had the second-highest number of Christians killed for their faith, behind Nigeria, with 620 slain during the reporting period from Oct. 1, 2020 to Sept. 30, 2021. Pakistan had the fourth-highest number of churches attacked or closed, with 183, and overall.