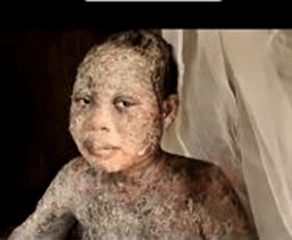 Amina Nagudi, 13, was sprayed with acid on March 8, 2022 in Namutumba District, Uganda for her faith. (Morning Star News)

They converted to Christianity when a pastor visited their home the morning of Feb. 17 and explained the gospel. When their relatives learned of their conversions, they called them to a meeting with other clan members on March 8, Waiswa said.

“During the meeting we were asked about our salvation, and we affirmed to them that we had believed in Jesus and converted to Christianity,” Waiswa told Morning Star News. “They told us to renounce Jesus, but we stood by the newly founded faith in Jesus.”

Christians had deepened the family’s faith in visits and Bible study after their conversion, he said.

“When we refused to recant our faith in Jesus, my father, Arajabu, recited some koranic verses, and after that they forcefully started beating us with sticks as prescibed in the Koran, claiming that we were apostates,” Waiswa said. “As this was not enough, my father went inside the room and picked up a bottle of acid and began spraying it on us while the group started shouting, ‘Allah Akbar [God is greater], you deserve death,’ and then disowned us.”

Initially they did not know what kind of liquid was sprayed on them, he said.

“But as we were fleeing for our lives, we started feeling some serious itching that continued till the pain intensified,” Waiswa said. “A nearby Christian neighbor called the pastor, who arrived immediately and took us to hospital in Mbale, but our daughter was seriously affected and was referred to a hospital in Jinja.”

On March 9, while the three were receiving hospital treatment in, their house was set ablaze, he said.

The three are still undergoing hospital treatment. They requested prayer for healing and for a place to stay after recovering.

Mulongo said he had met with a local pastor, whose name is undisclosed for security reasons, for six years before putting his faith in Christ on Jan. 13.

After Mulongo stopped leading prayer at the Bugobi mosque, Sheikh Abubakar Sekimpi took over and organized a manhunt for him, the former imam said. He had begun worshipping at a church in Iganga, and hardline Muslims waited for him about five kilometers (three miles) from the worship site, he said.

“It was around 8 a.m. when four Muslims stopped me and began asking me so many questions regarding Christianity, but I did not respond,” Mulongo told Morning Star News. “Then the men started beating me up with blows and sticks, but thank God when they saw some people approaching, they fled away.”

With deep head wounds, a broken wrist and bruises on his back, Mulongo was taken to a hospital in Iganga that belongs to one of the Christians in Bugobi, he said.

The assailants continued on to kill goats and chickens of the pastor who had led Mulongo to Christ, the former imam said.

They left a letter warning, “We know you are a deceiver, and that you converted our imam to Christianity. We shall soon get hold of you, which will be a big regret to your family and the entire church.”

“I have reported the matter to the area chairperson, who told me to be vigilant as the investigation is going on,” the pastor said.