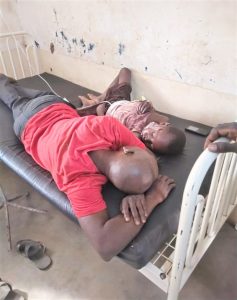 Some of the wounded at ECWA Health Centre in Kagoro, Nigeria after March 20, 2022 attack. (Jonathan Kish Adamu)

In northern Nigeria’s Kaduna state, the assailants raided the town of Kagoro, Kaura County from 8 p.m. to 11 p.m., residents said, destroying about 200 houses in four areas.

“Over 25 Christians were killed, and houses and properties were burnt to ashes in an attack carried out by armed Fulani terrorists in Kagoro,” town resident Samson Luka said in a text message to Morning Star News.

Area resident Violet Peter said she was unable to make contact with relatives.

“My mum’s family houses were all razed down, and one of my cousins was burnt to death in their house,” Peter said. “We haven’t been able to reach some of our relatives. Lord please, this is too much for us.”

Added resident Flora Kundi, “This is too much for us, my colleague has been killed.”

Two military personnel were killed along with 32 residents of the Tsonje, Agban, Katanga and Kadarko areas of Kagoro, said Samuel Aruwan, Kaduna state commissioner of the Ministry of Internal Security and Home Affairs.

“I’ve never experienced what I did last night,” she said. “We could hear the gunshots very close to us. This is not the country we were enjoying before. Our children can’t go to school today; we don’t know our fate anymore.” 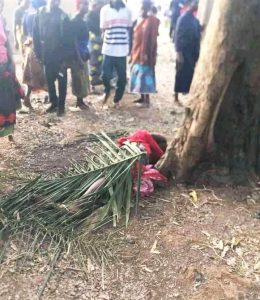 One of the slain in attack on Kagoro, Kaduna state, Nigeria on March 20, 2022. (Gideon Agwom Mutum)

Other comments by area residents echoed the despair: “Is this a war declared against Christians?” asked Florence Tachio. Mercy Waziri said, “I weep for my people! O Lord, arise and let our enemies be scattered!!” Gloria Nyan noted, “The attack on Kagoro last night led to the killing of innocent men, women and children in their homes, and houses in the community were destroyed. This atrocity will never go unpunished, no matter how they try to change the narrative.”

He gave the name of the missing woman as, “Mrs. Abigail Joshua, from Adan community.” More than 200 houses and 32 shops were set ablaze in the attack, and three vehicles and 17 motorcycles were vandalized, he added.

On Monday (March 21), the government imposed an indefinite, 24-hour curfew on two council areas of Kaura and Jema’a counties. Forcing residents to remain indoors could further endanger lives of Christians in the area, church leaders said. 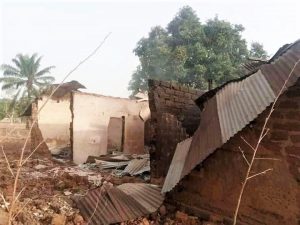 The Rev. John Joseph Hayab, chairman of the Kaduna state chapter of the Christian Association of Nigeria (CAN), said in a statement on Tuesday (March 22) that Christians were grieving “the continued killings, kidnappings, banditry, and the unimaginable evil going on in our state unabated without any substantial action by the government and security forces.”

“Kaduna state citizens are tired of the government’s rhetorical responses without concrete action taken to protect lives and property,” the Baptist pastor said. “Accordingly, we want to hear and see the killers and kidnappers arrested, as the government’s usual media condemnation whenever there is havoc is not good enough.”

Kaduna state has lost far too many lives to such attacks in the past four years, he said.

“The government’s response is usually in the media. Sadly, the dead cannot read nor listen to the news,” Hayab said. “CAN, therefore, calls on the Kaduna state government to swallow her pride and accept that she has failed the people genuinely seeking help to immediately halt the wanton killings, kidnappings, and terrorist activities going on in the state.”

The Nigeria office of Amnesty International also issued a statement strongly condemning unabated attacks in Kaduna state and calling on the federal government to end them.

Maxwell Bage said the assailants killed his father and brother.

“I have always heard of kidnapping but never knew it would come right at my doorstep,” Bage said. “I am now a victim as my Dad, Funom Bage, 57, and elder brother, James Bage, 30, were killed right in our house.”

Local resident Angela Kaboshio said the father and son were killed while they slept in their house.

“One other Christian, their neighbor, was also killed during the attack,” Kaboshio said. “Four Christian women were also kidnapped by the terrorists. God, please show us your mercy, and may their souls rest in peace.”

Hayab of CAN confirmed the killing of the three Christians and the kidnapping of the four Christian women. He said raids by armed Muslim terrorists and Fulani herdsmen have become so common that Christians are tired of reporting them, especially in light of the lukewarm response of the Nigerian government.

“Kaduna state has been on the news for the wrong reasons, which include banditry, kidnapping, attacks on Christian communities and killings of innocent citizens,” said Hayab. “This evil must stop now, and those keeping quiet need to speak up forthwith.”

He noted authorities did nothing to rescued recently kidnapped Christians or arrest the perpetrators.

“Recently, in the Kudendan community in the city of Kaduna, terrorists kidnapped a Catholic priest, the Rev. Fr. Joseph Akete of St. John Catholic Church, Kudenda, and his church’s security man, Mr. Luka was killed,” he said. “The priest was kidnapped alongside others, and nothing has been done to rescue them.”

In Dutsen Gayan village, Kajuru County, 11 Christians were kidnapped on March 5, he said.

“Another person was killed in the community the same day by the bandits,” Hayab said.