NEW DELHI (Morning Star News) – Still recovering from injuries at the hands of a Hindu extremist-led mob that beat him unconscious in January, a pastor in central India faces death threats, landlords who refuse to rent to him and baseless charges of forcible conversion, sources said. 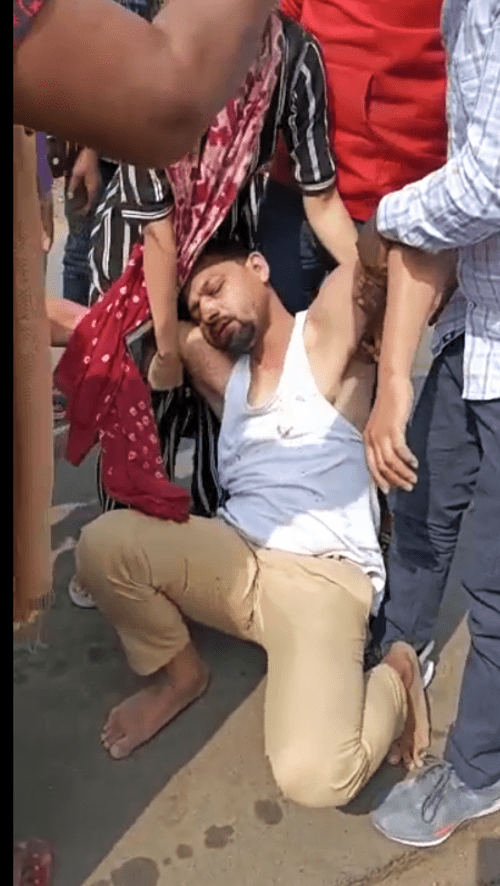 “Kailash Dudwe was brutally assaulted to the extent of almost being killed, was stripped and paraded on the street with grievous injuries, was hospitalized for a fortnight, a warrant issued against him and sent to jail,” said Anar Singh Jamre, a Christian leader in Pastor Dudwe’s area of Dhar District, Madhya Pradesh.

Hindu extremists led a mob of more than 20 people to attack Pastor Dudwe and six other Christians – his wife, a 16-year-old girl and four men – who had gathered to pray at his church site in Kukshi village on Jan. 14, he said. With his 1-year-old baby nearby, the assailants tried to hit his 5-year-old daughter with an iron bar, he said.

“My wife caught the rod and stopped it from hitting our daughter,” Pastor Dudwe said. “I still get terrified at the thought of their brutality, that they showed no mercy towards my little girl.”

The 16-year-old girl picked up his son and daughter and kept them from getting injured. The assailants struck everyone present but mainly targeted the pastor, shouting, “Hit them, hit them, they do religious conversion,” Pastor Dudwe said.

Seizing him and using coarse language, they took him outside and shouted, “Strip his clothes and we will parade him,” video recordings show.

Christian women are seen pleading with the mob to allow them to give water to the pastor as he lies on the ground semi-conscious, nose bleeding and unable to lift any part of his body.

“While I was losing my consciousness, they made me parade for about 500 meters before I fell on the ground bleeding with several injuries, and the police arrived,” Pastor Dudwe said.

When his brother-in-law called police, they arrested Pastor Dudwe but none of the assailants, the pastor said. Besides blows to his back, he was it on the back of the head with an iron rod.

“They targeted my head repeatedly,” he said.

The assailants struck Pastor Dudwe in his left eye, causing swelling, and he bled from his nose and mouth. He had to treat his eye for swelling and redness for 16 days, he said.

“I thought my nose bone was fractured,” he said. “I was in much pain.”

Officers took him unconscious to the Kukshi police station, he said.

“The officer in charge saw me, but he did not take my statement as I was unconscious and sent me straight to the Kukshi Civil Hospital, where I was given first aid and referred to Barwani,” the pastor said.

Area Christian leaders reached Kukshi and took him to Barwani Civil Hospital 17 miles away, where he stayed the night and was then transferred to a private hospital in Barwani. Pastor Dudwe was released from the hospital on Jan. 25, after which he went to Indore for hospital treatment for his ear for four days.

He continues his ear treatment from a private hospital in Barwani.

“I went to the doctor on March 9, he said that my ear was 50 percent recovered, and I still need to continue the medicines for two more months and have to revisit the doctor on May 9 for re-examination,” Pastor Dudwe said.

Arrest
Hearing about the arrest warrant issued against him, Pastor Dudwe surrendered himself at the Kukshi police station on Feb. 1. He appeared before a magistrate and was sent to jail on baseless charges of forced and fraudulent conversion, sources said.

He remained in Alirajpur jail for three days and three nights before he was released on bail the evening of Feb. 4.

Jamre, the area Christian leader, said police registered a complaint by the assailants while Pastor Dudwe was receiving medical treatment even though the Christians had submitted a complaint first by dialing the police hotline.

“They registered the complaint of the assaulters projecting Dudwe as an ‘accused,’” he said. “This is very wrong.”

The assailants’ First Information Report (FIR No. 0044, dated Jan. 14) was registered under the Madhya Pradesh Freedom of Religion Act of 1968, sections 3 and 4, which prohibit forcible conversion or use of allurement or other fraudulent means, punishable by one to five years in prison and minimum fine of 25,000 rupees (US$330).

A few hours after police filed the FIR of the assailants, Pastor Dudwe’s wife registered a FIR (No. 045, dated Jan. 14) against Ashok Bamnia and 20-25 others under Indian Penal Code charges of rioting, rioting armed with deadly weapon, house-trespass after preparation for hurt, assault or wrongful restraint, obscene act, voluntarily causing hurt and criminal intimidation.

When Jamre and the other Christian leaders asked the officer in charge why police had registered the assailants’ FIR first, he acknowledged his error and said he could not do anything about it, Jamre said.

“The police have sent a wrong signal to the assaulters, as if telling them that they are free to hit and harass a person and get away with it,” Jamre said. “Their hands have been strengthened. They are roaming about without any fear.”

He added that police arrested eight people from among those who attacked Pastor Dudwe and released them on bail from the police station.

“They were not even sent to jail for their inhuman act,” he said.

Pastor Dudwe said he gave police a list of the names of the assailants, but officers sent him away saying he needed to provide evidence.

“I went again, and this time I took the videos of the assault as a proof, but the police refused to believe,” he said. “They have been calling me to the police station time and again asking me to submit one document or another.”

Pastor Dudwe said the assailants have threatened to kill him twice, and that they also threatened his landlord in February and early March, telling him he will have trouble if he does not evict the pastor.

“The house owner has asked me to vacate the house and spare him the harassment,” said Pastor Dudwe, who remains in the house.

Pastor Dudwe has asked other property owners to rent to him and his family, but they refuse to do so after receiving threats from the assailants, he said.

In the face of the threats, Jyoti Dudwe filed a police complaint on Feb. 5 describing the death threats and requesting police protection, but none has been provided, Pastor Dudwe said.

Kukshi Police Station Head Officer Dinesh Singh Chouhan said on (Thursday) March 31 that a new section had been added to Jyoti Dudwe’s FIR under the Scheduled Caste and Scheduled Tribe (Prevention of Atrocities) Act of 1989 against committing atrocities against such tribal members.

Chouhan told Morning Star News he did not recall the date the section was added, but that it may have been around March 20, and that police had yet to make any arrests.

Meantime, Pastor Dudwe is required to appear before a judge once a month, he said.

“I have already been to court twice and I will have to be present on April 5 next,” said Dudwe.

Area Churches Shut Down
Pastor Dudwe’s church services have come to a stop since the attack, and local officials have given orders for other area churches to stop worship. The area administrative officer and revenue officer were concerned about the spread of disorder in the region, Jamre said.

“The authorities have told us that the atmosphere is not conducive, and therefore we must shut all the churches,” Jamre told Morning Star News. “The majority of churches in districts Jhabua, Barwani and Khargone have been shut.”

Hindu extremists are working behind the scenes to instigate tribal people against the churches, he said. They are targeting the tribal belt where all churches are led by pastors who are from tribal background, he said.

“It is their agenda to close all the churches led by tribal pastors,” he said.

On March 7 in Khargone District, police disrupted a church service and took down the names of all those present.