A church building in an area of Nagorno-Karabakh controlled by Azerbaijan has been desecrated.

The cross on the roof of the Armenian Church of the Holy Resurrection has been removed. An Armenian-language inscription has also been erased.

Additionally, images published in the Azerbaijani media show that the walls of the building have been defaced with graffiti. 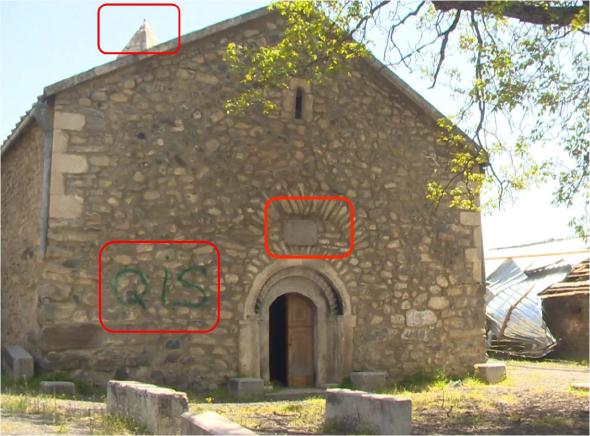 Images of the church building published in the Azerbaijani media show the cross missing from the church roof, a blank square above the church door where an inscription used to be, and graffiti on the walls [Image credit: Monument Watch]

It is also alleged that objects belonging to the church have been removed.

Azerbaijan’s invasion of Nagorno-Karabakh (mountainous Karabakh), an ethnic-Armenian enclave within the Muslim-majority Republic of Azerbaijan, began at the end of September 2020. The conflict ended in November 2020 with Azerbaijan having taken significant territories which had formerly belonged to Armenian communities.

Nagorno-Karabakh is part of the historic homeland of the Armenian people, who around 301 AD became the first Christian nation, and the region still contains many ancient churches and monasteries. Karabakh was placed within Azerbaijan by the USSR in 1923.

The desecration of the church appears to be the latest of many attempts to remove the evidence of Christian presence and history in Nagorno-Karabakh. In March 2021, for example, Azerbaijan was alleged to have demolished a church building in Mekhakavan.

In February 2022 Azerbaijan set up a new working group to “remove fictitious traces written by Armenians on Albanian religious temples.”

Azerbaijan denies the existence of Armenian Christian sites in Nagorno-Karabakh, arguing falsely that the sites belong to a group known as “Caucasian Albanians.” This theory is not supported by historians.

Ask the Lord to comfort Armenian Christians, distressed at the apparent efforts to eradicate all signs of the historic Armenian Christian presence in areas now controlled by Azerbaijan. Pray for the safety of Armenians who remain in Nagorno-Karabakh, those in vulnerable areas of Armenia itself, and for Armenian prisoners of war still being held by Azerbaijan since the conflict in 2020.