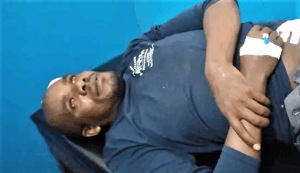 Most of the Christians holding an all-night prayer vigil had left when the structure of Holy Healing Ministry International Church in the city of Jinja’s Mpumudde ward was set ablaze at about 4 a.m., said church Pastor George Kato.

“The fire weakened the church structure and forced it to collapse,” Pastor Kato told Morning Star News. “I managed to escape with other remaining few members, but two elderly members were trapped inside, and the fire burned them beyond recognition.”

As he came out of the church building, Pastor Kato said, he found jerry cans of gas near the door.

“I made an alarm while running away,” he said. “I saw three Muslims dressed in long Islamic attire taking off. I couldn’t identify them.”

Hardline area Muslims accusing the Christians of being too loud in their worship services and prayer meetings had told them many times to remove the church building, he said.

As the building burned, Pastor Kato called police who arrived quickly, but the wooden structure was already engulfed in flames.

One of the two church members who died was identified as Jonathan Kalyecheru, 70. The identity of the second victim was unclear. The bodies were taken to Jinja Regional Referral Hospital mortuary as police investigated.

Jinja is in Jinja District on the north shore of Lake Victoria, about 80 kilometers (49 miles) from Kampala, the capital.

Near eastern Uganda’s Mbale town, hardline Muslims on April 28 intercepted a church leader and cut him with knives after he left an open-air evangelistic event where he had debated Muslims, sources said.

Bishop Amon Sadiiki was receiving treatment for wounds on his head, stomach and legs. He was ambushed after four days of debates with Muslims in Mbale.

“On the fourth day of the debate, 11 Muslims converted to Christianity,” an area contact said, adding that as the bishop left Mbale at about 8 p.m., many Muslims were shouting at him.

Believing Sadiiki might not be safe traveling alone, organizers of the event arranged for two Christians on motorcycles, Peter Wabukoma and Moses Werikhe, to escort him. On the Mugiti-Kabwangasi road, they noticed two motorcycles with three riders following them, who then passed by brandishing knives and shouting the jihadist slogan, “Allahu Akbar [God is greater],” the source said.

The men jumped off their motorcycles, stopped them and immediately began hitting and cutting Sadiiki before he could be defended, one of the escorts said.

“We made a loud alarm shouting for help for the bishop needing rescue, for he was at the point of death, which brought the attention of some nearby students from Mugiti High School, a Christian-founded school, and the school management managed to chase the attackers away, but the bishop was seriously injured,” Wabukoma said. “The bishop’s stomach, head and legs were cut with sharp knives, and he lost a lot of blood.”

Sources said Sadiiki was on a Muslim “wanted list” because he left Islam to put his faith in Christ, built a church in the middle of a predominantly Muslim village and carried out healing services that led many Muslims to Christ. He was also targeted, residents said, because he organised an evangelistic event in Mbale, considered a Muslim stronghold, during the Islamic month of Ramadan at which many Muslims embraced Christianity.

Sadiiki received first aid from the high school nurse, who bound his wounds, while he waited for a rescue team called from Mbale. The team arrived at about 10:45 p.m. and took Sadiiki to a private clinic in Mbale.

“The bishop’s condition is stable, but he will need another two weeks in the hospital because he suffered a deep cut on the head,” the contact said.

Church leaders planned to file a police report when the bishop is discharged from the hospital.

On May 3, Muslim extremists attacked his son, 21-year-old Frank Amon Sadiiki, as he returned home from taking food to his father at the hospital, the area contact said.

“While on his way back on a motorbike, two people stopped him at around 8 p.m. and then hit him with an object on his legs,” the source said. “Immediately a vehicle appeared with bright lights, and the attackers fled.”

Frank Sadiiki was rushed to a nearby clinic for treatment for cuts on his legs.

The bishop told Morning Star News that he and his family were unsafe and need prayer.