Christians Left without Homes after Easter Attack in India 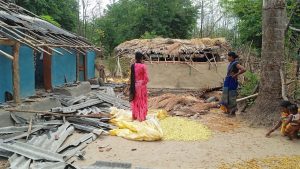 The assailants, followers of tribal nature-worshipping religion, were upset that the Christian families in Odisha state’s Ejariguda village, Malkangiri District, were preparing for Easter rather than their traditional festival, said the first victim, Podia Madkami, whose three daughters were kidnapped in an assault by tribal villagers 10 years ago and remain missing.

The only three Christian families in the village are unable to return to the properties where their homes lay demolished due to threats on their lives, they said.

Madkami, 45, said he and his wife Budri Madkami were at home preparing for an Easter service and luncheon at 8 a.m. when about 20 people brandishing wooden batons from a mob of more than 100 intruded into their home, beat him and threw the food for the community Easter luncheon to the ground.

“They hit me with wooden batons, kicked me, slapped me and punched me,” Madkami, who speaks only Odia, told Morning Star News through a translator.

He sustained serious leg injuries and a wound on his forehead requiring hospital treatment, and the assailants manhandled his wife and tore her clothes, he said.

Pastor Bijay Pusuru, who oversees the house church that met in Madkami’s home, said the assailants tried to kill him.

“Podia Madkami was attacked to be killed – when 100 people attack someone, it is with the intention to kill,” Pastor Pusuru told Morning Star News. “The attackers showed no mercy or restraint while hitting Podia. It is only God’s grace that he is not dead, looking at the severity of the assault.”

Besides demolishing the walls and roof of Madkami’s house, the mob destroyed his grain stocks and food and stole 10,000 rupees (US$130), he said.

“They ransacked my house and my yearly grain harvest,” Madkami said. “How will we sustain ourselves for the entire year with no food and no money? They threatened us to not return to the village or else they will kill us.”

The followers of traditional tribal religion then went to the other two Christian homes, one belonging to Samari Kabasi, who lives with her 13-year-old daughter, and another belonging to Kabasi’s son, Padman Kabasi, and his wife.

“There are only three Christian families in the entire village, and the villagers got together and assaulted all the Christians and vandalized their homes and property and forced them to flee the village,” Pastor Pusuru said.

Madkami and the other Christians received first aid at a government hospital, and the doctors prescribed medicines for Samari Kabasi, who suffered ear injury and stomach pain.

“They slapped me on my face three or four times, which injured my ear, and kicked my stomach,” Samari Kabasi told Morning Star News through a translator.

Decade of Persecution
Podia Madkami became the first Christian in the village after losing his first wife to disease and then becoming bedridden with illness for two years while trying to care for his three daughters – the oldest began working as domestic help at 8 years old to support the family.

“There was no flesh on his bones – nobody from the village came near him,” said Pastor Pusuru.

About 10 years ago, a Christian visited Madkami and prayed for him, which helped him feel better, and after a few more visits and prayers, he was completely healed, he said. Madkami said he put his faith in Christ and testified to others how he was miraculously healed.

Tribal villagers held a meeting, later questioned Madkami about his new faith and beat him unconscious as they tried to force him to recant, he said.

“I told them, ‘Where were you when I lay in my house on the bed for two years like a dead man? Nobody from the village enquired about me. My little girl had to work in homes at such a tender age, come back and cook for me and her sisters. Now that I am healed and capable of providing for my family, you come here and assault me for believing in the One who healed me?’” Madkami said.

When the bloodied Madkami would lose consciousness, they would revive him, give him water to drink and resume beating him, Pastor Pusuru said.

“Will you leave Christ now?” the villagers asked him, according to Pastor Pusuru, and Madkami replied, “Cut me into small pieces, yet will I not leave Christ.”

That same day, the pastor said, they disconnected Madkami’s water and electricity and seized his ration card – and kidnapped his three daughters. Two of the assailants took the three girls to their homes and forced them to work as slaves, beating and threatening to kill Madkami and his daughters if he reported it to police.

The girls have been living in the houses of villagers for nearly 10 years, and villagers have not allowed him to speak to them, Madkami said.

“Madkami has been weeping and pleading for his daughters ever since,” said the pastor of Madkami’s house church, Erma Kuraami.

Pastor Kuraami added that Madkami’s oldest daughter fell in love and married last year, and the kidnappers forbade Madkami to attend her wedding.

“Madkami was emotionally wrecked after his daughters were taken from him,” said Pastor Pusuru. “He was lonely; his wife had died already. We had a God-fearing believer widow in one of our congregations; after prayer, we got Madkami married to her. God has blessed Madkami ever since.”

The anti-Christian villagers encroached on Mangola Kabasi’s land, seized the ownership documents and began to cultivating it as punishment for converting to Christianity, Pastor Pusuru said. They cut off the Christian family’s electricity and ostracized them. Mangola Kabasi’s response to the followers of tribal religion was, “Do you want something more? If you do, take that too, but we will not leave Christ,” according to Pastor Pusuru.

Mangola Kabasi was forced to leave the village and take a job in Andhra Pradesh to sustain his family. He left his wife, Samari, behind along with their daughter; they continue to face opposition.

The house church that met at Podia Madkami’s house is the first tribal church among 70 surrounding villages.

Police Response
Pastor Kuraami said he was on his way to Ejariguda to lead the Easter service on April 17 when a secret Christian from the village informed him of the attack. He called Pastor Pusuru, who immediately called the Malkangiri police station at 8:30 a.m., but officers did not arrive for another hour.

“I don’t know what took them so long,” Pastor Pusuru said. “If the police would have reached in time, a lot could have been avoided.”

Officers took six Christians to the Malkangiri police station, and Pastor Kuraami followed and wrote the draft of a complaint in Odia, submitting it after getting Podia Madkami’s thumb impression on it.

Pastor Kuraami, who does not understand English, said that he included the kidnapping and the forced labor of Madkami’s daughters and the seizure of the Kabasi family’s land in the complaint. He was shocked when Morning Star News informed him that the police FIR in English mentions only the Easter attack.

Of the 19 people named in the FIR, police arrested six in late April and released them on bail the same evening, Pastor Kuraami said.

Pastor Pusuru said that the inspector-in-charge listened to Madkami tell of the persecution he had suffered for 10 years and asked him what he wanted, and that Madkami replied, “I want my children back, my house back, my place in the village back, and my land back.”

Pastor Pusuru said he has met with higher officials, but no action has been taken so far on Madkami’s requests. When the pastor explained the case to the sub-divisional police officer on April 25, the official suggested arranging a “compromise” agreement, which customarily limits Christians’ rights or is violated by the perpetrators.

“I disagreed about a ‘compromise’ as I spoke to him,” Pastor Pusuru said. “I told him that after compromise, our people will go and live there, and those people will come and assault them again and maybe this time kill them. Several times a year we go to the police station, but no action is taken against the assaulters. The police always want us to compromise.”

Police often refuse to register an FIR against the assailants on the pretext that it will lead to “communal violence,” he said.

Madkami pleaded with Morning Star News to help him get his children back, and when this reporter approached Sub-Collector Akshya Kumar Khemudu in Malkangiri, he pledged to take strict action against the perpetrators.

“I will enquire about the issue,” Khemudu said. “I assure you that the district administration will give proper justice to the relatives, if this has happened.”

The April 17 assault was just one of eight instances of persecution related to Easter and the preceding Holy Week in India. Four cases of anti-Christian activity were reported in Uttar Pradesh state, two in Chhattisgarh state and one in Haryana state, according to the Evangelical Fellowship of India (EFI).

“While the Christian community gets targeted throughout the year, it is on the community’s festive days that the targeting seems to get more acute,” said Surender Pokhal of the EFI’s Religious Liberty Commission. “We have noticed this trend even during this Holy Week and Easter, where the Religious Liberty Commission recorded eight incidents where the Christian community faced opposition, violence, church worship disruptions, arrests, vandalism and house demolitions, etc.”

There were other incidents that the commission was unable to verify, he said.

“There would have been more that were either not verifiable or not reported at all,” Pokhal said.